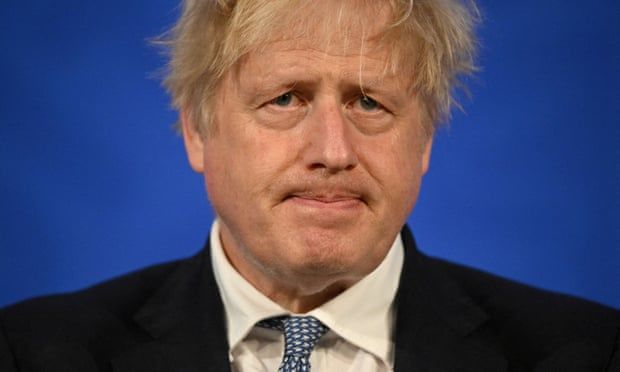 Sense of crisis deepens in No 10 as speculation mounts about no-confidence vote in prime minister
Boris Johnson and his allies have launched an emergency effort to lobby wavering MPs as he faces the spiralling threat of a confidence vote in his leadership that could put his position under threat within days.

By Tuesday night, at least 44 Tory MPs had publicly questioned Johnson’s fitness to hold office, including 18 who are known to have sent letters to Sir Graham Brady, chair of the 1922 Committee of Conservative backbenchers, to formally seek a confidence vote.

The remainder have openly called for the prime minister to resign or said they had lost faith in his leadership.

The growing rank of public critics was joined on Tuesday by Andrea Leadsom, the former cabinet minister, saying there had been a “failure of leadership” inside No 10. Two further MPs, both of whom hold government posts and so have not spoken publicly, are also known to have submitted letters.

Separately, the Guardian has seen letters to constituents or public statements from at least 35 further MPs that suggest they are openly questioning the prime minister’s future, or express deep disquiet at events in No 10 – including ex-ministers Richard Graham and Mark Garnier, and the 2019 MP Anthony Browne.

Browne, who told constituents he had lost his mother during the pandemic, said he was “dismayed by the behaviour shown by the PM and senior staff at No 10, and concur that there was a poor culture and a failure of senior leadership, both political and official. It is right they must bear responsibility.”

Garnier said that some would “question the probity of the Met and how their view on what happened seems to differ from what appears in released photographs” but suggested he would wait for an inquiry by the Commons privileges committee to report back on whether Johnson had misled MPs.

Graham told constituents he would not be issuing a new statement until the privileges report was over – and would not reveal whether he would send a letter. But he said other colleagues had decided the PM had misled parliament and should resign, and “I respect their views”.

Brady declined to comment on Tuesday about whether it was close to the threshold. “You can always ask,” he told BBC News. “I say to people they are very free to do that, and I shall retain my discretion. I can say nothing more.”

There is, nonetheless, increasing expectation that enough letters have arrived or will soon be sent for a confidence vote next week, or otherwise this could happen should the Conservatives perform badly in two key byelections next month.

While it is possible Brady could announce a confidence vote during the current parliamentary recess, senior Tory sources have suggested Brady would hold off until after the Queen’s platinum jubilee weekend.

As the sense of crisis deepened inside No 10, Conservative whips began phoning MPs to try to secure their support. Reports said Johnson had also done this, hinting at possible promotion – although one Downing Street source claimed he was “too busy”.

Leadsom, who served as business secretary under Johnson, published a letter to constituents saying last week’s report into lockdown-breaching parties inside Downing Street showed “significant failures of leadership, both political and official”.

“Each of my Conservative MP colleagues and I must now decide individually on what is the right course of action that will restore confidence in our government,” she argued.

Also on Tuesday, John Stevenson, the MP for Carlisle, said he had added his name to those writing to Brady.

He said: “Sadly the prime minister appears to be unwilling to bring matters to a head and submit himself to a vote. Therefore the only option is for Conservative MPs to facilitate a vote of confidence. I have already taken the appropriate action.”

Sign up to First Edition, our free daily newsletter – every weekday morning at 7am BST

Opponents have already begun seeking to convince enough MPs to vote against Johnson if a confidence votes does happen, arguing that if the prime minister secured a narrow win he would either limp towards election defeat or risk a snap poll. “We need to get to 160 or he’ll destroy all our electoral hopes,” one said.

Amid the fallout from last week’s Sue Gray’s report into No 10 parties, Johnson wrote to his independent adviser on the ministerial code, Lord Geidt, to say that as the arbiter of the code, he did not believe he had breached it by being fined for attending his birthday party.

“In relation to the fixed penalty notice for my attendance in the cabinet room on 19 June 2020, I believe that, taking account of all the circumstances, I did not breach the code,” Johnson wrote, adding that the chancellor, Rishi Sunak, who was fined for the same event, was also in the clear.
#Boris Johnson  #Johnson
Add Comment