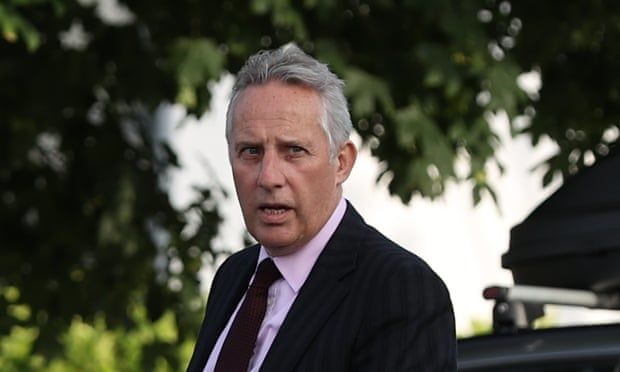 Boris Johnson gave personal assurances to the Northern Ireland MP Ian Paisley that he would commit to “tearing up” the Brexit protocol that is now the centre of a major row between the UK and the EU, it has been claimed.

The Democratic Unionist party MP made the comments on BBC’s Newsnight just hours after the prime minister’s former adviser Dominic Cummings claimed it was always the intention to sign the withdrawal agreement in January 2020 but “ditch bits” they did not like in the protocol.

“Boris Johnson did tell me personally that he would, after agreeing to the protocol, he would sign up to changing that protocol and indeed tearing it up, that this was just for the semantics,” Paisley said.

Referring to Cummings’ claims that they needed to go to the country with a flawed deal to help with “whacking [Jeremy] Corbyn” in the election of 2019, Paisley added: “That comment has been verified by another source much closer to Boris Johnson within his own government.

“So, the fact of the matter is, I do believe, that the government didn’t really want this to happen to Northern Ireland and they took a short-term bet.”

The shadow international trade secretary, Emily Thornberry, said it was “shameful” for the UK to start playing “fast and loose” with other countries in regard to international law.

“I think we step down as a country, we don’t have the same international reputation, if our word isn’t our bond,” she told Sky News.

Newsnight reported that the reputed exchange between Johnson and Paisley was said to have happened before a key vote on Brexit on 22 October 2019.

At the time, Downing Street felt democracy in the country was being subverted by a proposed law to stop a no-deal Brexit happening. That law, labelled “the surrender act” by Brexiters, was recently cited by the Brexit minister, David Frost, in a speech to the Conservative party conference.

“Of course we wanted to negotiate something better. If it had not been for the madness of the surrender act we could have done so. We worried right from the start, the protocol could not take the strain,” said Lord Frost, although at no stage did he say the government entered into the deal with the intention of renegotiating it soon after.

The row over whether the government acted in good faith or not when it signed up to the protocol has caused “alarm” in Dublin but comes on the eve of a potential breakthrough on the issue.

On Wednesday the EU unveiled proposals to do away with more than 80% of the checks on goods and food, something Paisley said looked like a “significant” climbdown but did not go far enough as it did not also offer to scrap the role of the European court of justice.

One possible compromise emerging on the ECJ is to adopt the same dispute mechanism as in the EU-Swiss treaty.

Anton Spisak, a trade expert at the Tony Blair Institute for Global Change, said: “Under the Swiss treaty, the independent arbitration panel resolves all disputes as a default arbiter. But when questions about EU rules are asked, the ECJ has to offer its view. The independent panel is the one making the ultimate decision, but it has to take the views of the ECJ into account,” he said.

Spisak believes this would be a “credible landing zone” and would make the protocol look more like a “standard international treaty”.

After being briefed on the EU proposals by Maroš Šefčovič, Sir Jeffrey Donaldson, the DUP leader, said its “persistent pressing” of the case for changes to the protocol had “paid dividends” but that the planned changes fell short of his complete demands.

The Sinn Féin president, Mary Lou McDonald, told RTÉ’s News at One the DUP did not represent the majority opinion in Northern Ireland and the protocol was needed to protect the interests of people across the island of Ireland.