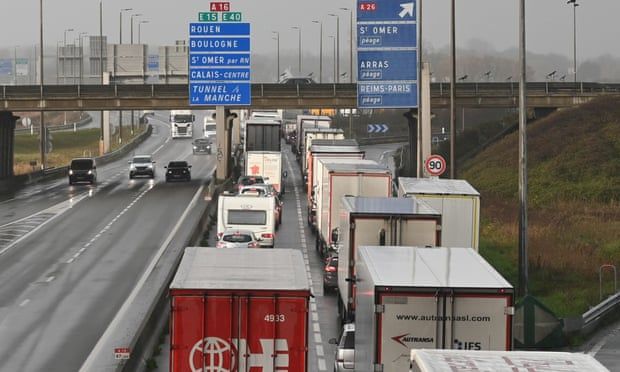 Inspections at borders may be pushed back for fourth time amid fears food supplies from Europe could collapse
Boris Johnson has hinted that physical Brexit border checks on food imports from the EU due to be introduced in July will be delayed for the fourth time amid fears that European supplies of everything from cheese to Parma ham would collapse.

Industry sources said an announcement on a new border operating model was expected next week that could push back the checks by up to nine months.

Asked during his visit to India if this was the case, the prime minister said: “I’m generally in favour of minimal friction at all junctures between the UK and the EU.”

He also indicated he had not abandoned hope that the Irish Sea border checks could, in time, be moved to the Northern Ireland border with the Republic of Ireland, something that was rejected during the four years of negotiations over the UK’s divorce from the EU.

“New technology will make some of the checks we have obsolete. That leads me on to the long-term solution to the border of Northern Ireland and the Republic, but that’s another matter,” he told reporters.

Sanitary and phytosanitary (SPS) checks have been operational in all EU border countries including France, Belgium and Ireland since the Brexit withdrawal agreement was implemented on 1 January 2021.

The cliff-edge approach left exporters of fish and other fresh food in chaos with a lack of customs agents and veterinary staff to certify whether the produce complied with EU standards.

But in the UK, post-Brexit checks on fresh food were not implemented for imports, being pushed back in 2020 and on two occasions in 2021.

Under the current border plan, physical checks on meat were due to start on 1 July, dairy on 1 September and all remaining foods including fish and composite foods subject to checks from 1 November.

The government confirmed this timetable was “under careful review” amid concerns about the impact on household supplies.

“We are keeping this issue under careful review, given ongoing supply chain disruption – including as a result of Russia’s illegal invasion of Ukraine – and wider cost of living pressures.

“It is precisely because of Brexit that we’re able to set an import controls regime which is best suited to our own needs,” said a government spokesperson.

One industry source said the biggest risk from the new Brexit checks was the “collapse of the supply chain” because of a shortage of vets to certify produce before it can be put on a ferry to Britain. There is also a fear that red tape and new costs will cause some small suppliers to give up on the UK market.
#Boris Johnson  #Johnson
Add Comment