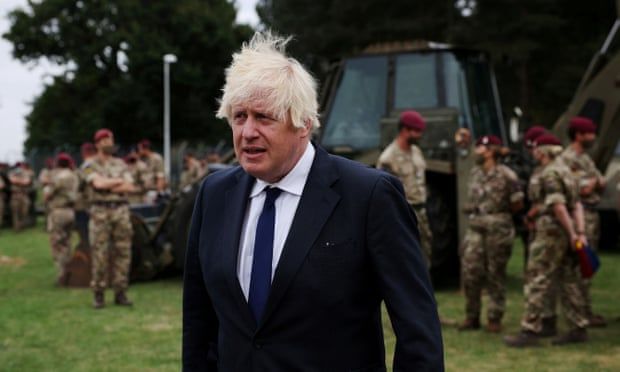 Defence sources said the prime minister had been advised to pick a new military leader with “operational experience” to replace the outgoing Gen Sir Nick Carter, whose credibility was damaged by the chaotic exit from Afghanistan.

But there is uncertainty at the Ministry of Defence as to who Johnson will favour for the £270,000 a year post, although there is an expectation that Downing Street will announce the appointment this week now the final stage of interviews are complete.

All four armed forces officials are in the running, plus a more junior wild card candidate, Vice Adm Ben Key, responsible for joint operations, who was put in the field after No 10 wanted an extra, non-traditional name from the MoD.

Radakin, 55, the first sea lord, is seen as an experienced manager whose candidacy comes at a time when Johnson is pushing for greater use of British naval power, with the deployment of the Queen Elizabeth aircraft carrier in the Pacific.

But there is unhappiness in some quarters of Whitehall that the admiral has appeared eager to claim credit for the Aukus nuclear submarine pact with Australia and the US, when it was largely negotiated by No 10.

Sanders, 55, a special forces veteran who has served in Iraq and Afghanistan, has more combat experience, although he heads up strategic command, a disparate group that combines the military’s cyber forces plus the secretive SAS.

Both, though, are acknowledged to be the strongest communicators in the field. “Nobody wants a repeat of Carter after Afghanistan, where he hit the wrong tone in the aftermath of the Taliban’s seizure of Kabul,” said one defence source.

Days after the fall of Kabul last month, Carter labelled the Taliban as “country boys” who wanted an Afghanistan “inclusive for all” – although there have been repeated reports of violent reprisals by the country’s new rulers, who have also effectively banned the secondary education of girls since taking over the country.

Despite the faster than expected collapse of the previous Afghan government, Key is felt to have presided over what is seen as a relatively successful emergency airlift from Kabul last month, in which the RAF rescued 14,500 people. Promoting him over the more senior service chiefs would be a major upset however.

The interviews complete a two-stage process, which began with a series of grillings at the beginning of the month by an MoD panel headed by Ben Wallace, the defence secretary. Following that, Wallace sent his own recommendation to the prime minister, but the decision is ultimately Johnson’s.

A defence source said Johnson had been told by Stephen Lovegrove, the national security adviser, to seek somebody with “calm judgment”.

Among the other candidates is Sir Mark Carleton-Smith, 57, the head of the army, who was at school with Johnson at Eton, which some believe could yet give him a chance. “Boris does like to reward people who he thinks have loyalty to him,” a former Downing Street staffer said.

Completing the field is head of the RAF, Air Chief Marshal Sir Mike Wigston, who presides over the service seen as having the best record on diversity. But he is not seen to be as strong a public speaker as Radakin, and insiders say he does not fancy his own chances strongly.

Tony Radakin: Royal Navy chief seen as a good public speaker with an eye for a PR opportunity, only last week announcing the appointment of Bond actor Daniel Craig as an honorary commander, to act as an advocate for service families.

Patrick Sanders: Special forces veteran who served on every major deployment over the past 25 years. Recently admitted his experiences in Iraq had left him with suicidal thoughts, as he called for soldiers and veterans to seek help for PTSD.

Mark Carleton-Smith: Old Etonian and former SAS commander who took over as head of the army in 2018. Once in charge of the SAS’s hunt for Osama bin Laden in Afghanistan – although the al-Qaida leader was ultimately shot by the US.

Mike Wigston: Comprehensive educated Welsh former Tornado pilot. Last month said the RAF was prepared to launch fresh, long-range strikes in Afghanistan even though there could be instances of “unavoidable civilian casualties.”

Ben Key: Head of operations whose profile soared during the Afghanistan crisis. Led the day to day deployment of 1,000 British troops around the perimeter of Kabul airport allowing hasty two week evacuation of Britons and Afghans to proceed.