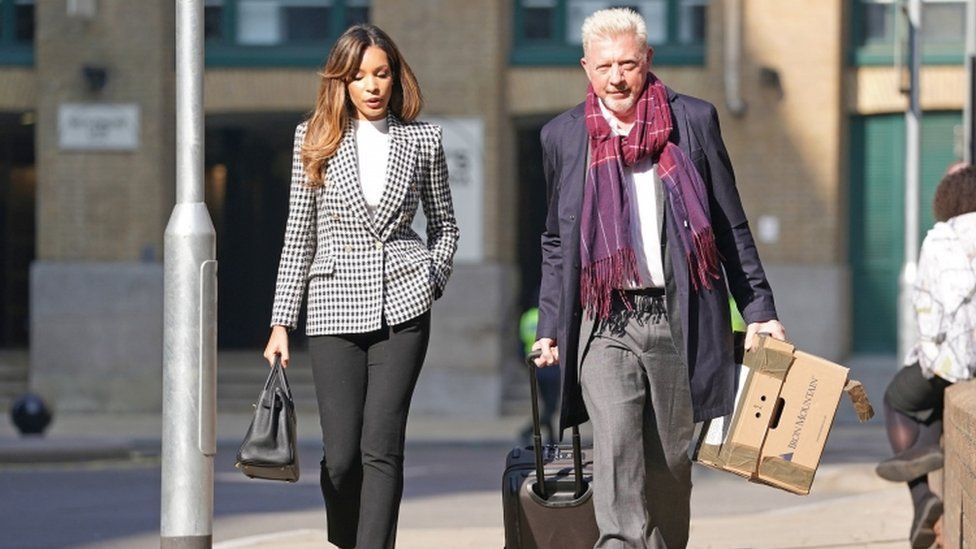 Boris Becker, the six-time Grand Slam tennis champion, offered his wedding ring in a bid to pay off his debts, a court has heard.

Mr Becker also wanted to sell his Mallorca estate in an effort to cancel his bankruptcy, the jury was told.

The 54-year-old German national was declared bankrupt in June 2017 after borrowing more than £3m from a bank.

He is on trial at Southwark Crown Court charged with 24 offences under the Insolvency Act. He denies all charges.

The former men's world number one is accused of hiding, or failing to hand over, assets including nine trophies and medals from his tennis career.

His 1985 and 1989 Wimbledon men's singles titles, his Australian Open trophies from 1991 and 1996 and his 1992 Olympic gold medal are among the items he is alleged to have concealed.

As the third day of his trial began on Wednesday, the court heard that Mr Becker had been interviewed at his London home in July 2017 by Michael Bint from the Insolvency Service.

The prosecution is being brought by the Insolvency Service on behalf of the business secretary.

In court, Mr Bint agreed with Mr Becker's barrister - Jonathan Laidlaw QC - that the tennis star had been "co-operative" during the hour-long discussion, which happened amid time pressures due to Mr Becker working for the BBC at a nearby tennis tournament.

"He offered to let you walk around the house in Wimbledon to see what was there, he volunteered an expensive wedding ring to you," Mr Laidlaw said.

The barrister added that Mr Becker's "overriding concern was to seek an annulment of the bankruptcy".

But the former tennis champion is accused by prosecutors of failing to hand over various high-value items.

The jury was told the tennis star was interrupted on about 20 occasions by his adviser, who allegedly spoke of "work in progress" or "investigations being in hand" at least 14 times.

Mr Bint said he had failed to get Mr Becker to sign a preliminary information questionnaire document - the only time he has forgotten in hundreds of cases since 2007 - because "Mr Becker had to simply run away to go to Wimbledon".

"Normally I would ask for a signed copy," Mr Bint added.

Mr Becker is also alleged to have hidden €1.13 million (£940,000) from the sale of a Mercedes car dealership he owned in Germany, which was paid into his Boris Becker Private Office (BBPOL) account.

On Tuesday, Prosecutor Rebecca Chalkley said: "It is the prosecution case that Mr Becker used the BBPOL sterling account as an extension of his own account, effectively as his own piggy bank, for everyday personal expenses such as school fees for the children and such like."

Ms Chalkley told the jury that the former world number one spent hundreds of pounds at Harrods, bought online groceries at Ocado and treated himself to Ralph Lauren clothes.

At the start of the trial, Judge Deborah Taylor instructed the jury of 11 men and one woman to ignore Mr Becker's celebrity.

"You must treat him in exactly the same way you would treat someone you have not heard of and is not in the public eye," she said.

The 24 charges Mr Becker has been accused of include:

* Nine counts of failing to deliver up trophies and other awards;

* Five counts of failing to disclose estate, including the properties in Germany and London, shares and a bank account

The trial, which is expected to last up to three weeks, continues.