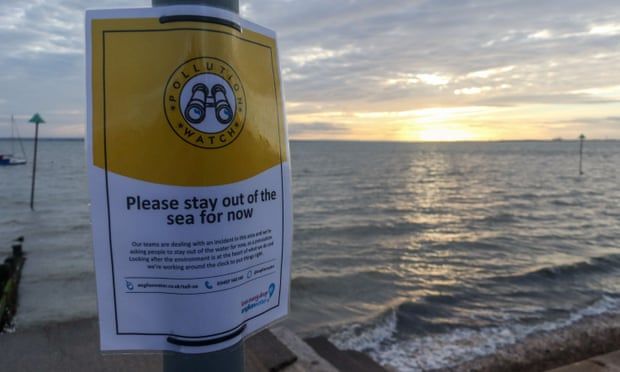 Figures show on average executives received £100,000 in one-off payments on top of their salaries, during a period in which foul water was being pumped for 2.7m hours into England’s rivers and swimming spots.

The analysis of water companies’ annual reports found that their bonus pool for executives now stands at more than £600,000 a company on average.

This summer, sewage releases have continued to blight the country’s coastline, with holidaymakers told to stay away from the sea at some beaches this week. Data suggests recent discharges have taken place in coastal areas of Cornwall, Cumbria, Devon, Essex, Lancashire, Lincolnshire, Northumberland and Sussex.

Devon’s beaches are among those where locals and visitors have been urged not to swim due to the human waste pumped into the ocean.

Severn Trent gave out the highest payouts in bonuses, base pay and benefits to executives, topping the chart at £5,939,300, and United Utilities came second, paying £4,218,000.

Richard Foord, the MP for Tiverton and Honiton in Devon, has seen beaches in his constituency marked as unsafe this week as a result of sewage discharges, and said: “Local people and holidaymakers shouldn’t be forced to swim amidst human waste. Devon’s beaches are amongst the best in the world but the government is turning a blind eye while private companies ruin them.”

The south coast has been particularly badly hit by the sewage spills, with Sussex facing beach closures.

MPs from Sussex have written to Southern Water and the Environment Agency asking them to respect and protect the coast.

They called for a plan to end discharges, adding: “In addition to the obvious environmental and community impact, the closure of popular beaches and restrictions on inland waterways causes financial loss to the numerous businesses who rely on our beaches and rivers.”

“Like many, I’m disgusted by the scenes of raw sewage being pumped into the sea in Seaford. This marks another sad and stark day for our environment.

“Seaford is in what’s known as a Marine Protected Area which is an area specifically set up to protect fragile wildlife and habitats. Southern Water urgently need to explain themselves.

“Dumping sewage into the sea is not only harms wildlife, it affects everything from our health, public safety to the local economy. It’s in all our interests that this Victorian malpractice stops now.”

Further sewage alerts were issued on Thursday across popular holiday destinations, with the Isle of Wight particularly affected. There have been overflows, according to the Surfers Against Sewage map, at 12 different places around the island, with swimmers warned they could become unwell if they go in the sea.

Sailor Mary Phillips lives on the Isle of Wight and said: “I live close to a beach that has been marked as ‘no go’ because of sewage discharge this week. Such a loss – many people love to walk, relax, swim – particularly in this warm weather. Here on the Isle of Wight we had very little rain, so ridiculous to blame it on storm floods.”

“Years of underinvestment is now in plain sight. It’s time that huge water company profits were diverted to properly managing water and sewage, and protect people and planet.

“Our rivers and beaches should not be subject to this type of industrial environmental vandalism.”

Last year Southern Water was fined a record £90m after admitting deliberately dumping vast amounts of sewage into the sea across the south coast.

Thames Water has come under fire for failing to fix leaky pipes, with a hosepipe ban coming into place next week for its customers, and last year gave executives £3m in bonuses, base pay and other benefits.

The Liberal Democrats’ environment spokesperson, Tim Farron, said: “This is a national scandal. These disgusting polluting habits have made beaches unsafe in the middle of the summer holidays and harmed precious British wildlife.

“Hosepipe bans could have been avoided this summer if these water company CEOs bothered to invest in their rusting pipes rather than stuffing profits in their pockets.

“They are putting profit over the environment. Frankly, the whole thing stinks.”

In a report published in July, the Environment Agency said water company bosses should face jail for the worst pollution incidents, describing the sector’s performance in 2021 as the “worst we have seen for years”.

The agency this week said that the risk of surface water floods caused by sudden heavy rain “reinforces the need for robust action from water companies to reduce discharges from storm overflows”.

A Water UK spokesperson said: “Companies agree there is an urgent need for action to tackle the harm caused to the environment by spills from storm overflows and wastewater treatment works. They are investing over £3bn to improve overflows as part of a wider national programme to improve the environment between 2020 and 2025, and leakage is its lowest level on record with further steep reductions planned each year.

“The bonuses of all water company executives are linked to performance and reflect customer and environmental outcomes. Private investment has brought more than £160bn into an industry that was previously starved of cash, while improving water company efficiency by over 70%. That efficiency means costs are lower, allowing bills to remain around the same for over a decade in real terms, while still allowing new investment in resilience projects and reduced leakage.”
Add Comment