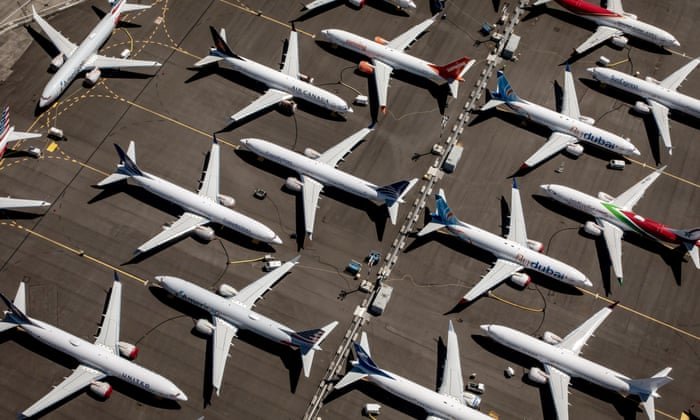 Executives mocked their regulator and joked about safety in hundreds of messages given to congressional investigators
Boeing is more than a year into the worst crisis in its 103-year history and it just got worse.

The fatal crashes of two of company’s 737 Max jets – which claimed 346 lives – have already shone a harsh light on Boeing’s corporate culture and its cosy relationship with its regulator. Then on Thursday hundreds of pages of internal messages were delivered to congressional investigators in which Boeing executives mocked their regulator, joked about safety and said the Max had been “designed by clowns”.

Shocking as the emails are, they will come as no surprise to those following the Boeing story. Last month Edward Pierson, a former senior manager at Boeing’s 737 factory in Renton, Washington, told Congress he had witnessed “chaos” at the factory where the Max was built and had warned management that “Boeing was prioritizing production speed over quality and safety”.

His warnings were ignored.

Lawmakers also heard the Federal Aviation Administration (FAA), Boeing’s regulator, allowed the Max to keep flying even after its own analysis found the plane could have averaged one fatal crash about every two or three years without intervention.

That decision came a month after the Lion Air crash in October 2018 that claimed 189 lives, and four months before an Ethiopian Airlines crash that killed another 157 people.

New software meant to prevent stalling has been blamed for both crashes and it is now clear training on that software could well have prevented them. But training costs money and the release of the latest messages shows Boeing was doing all it could to block any regulatory requirement for airlines to train pilots in a simulator on the differences between the 737 Max and its predecessor the 737 NG.

Boeing claimed the planes were so similar that experienced pilots could be trained on the differences in a one-hour lesson on an iPad.

What will happen now? Senator Richard Blumenthal has called the emails “astonishing and appalling” and called for more congressional hearings.

But the outrage over the emails is unlikely to address the structural issues that led to these tragedies. Boeing is simply too big to fail. The company is the US’s largest export manufacturer, it supports 8,000 suppliers across the US and its woes are big enough to trim the economic fortunes of the entire country. In a clear sign of the scandal’s impact, on Friday aircraft parts maker Spirit AeroSystems announced it is laying off 2,800 employees at its facility in Wichita, Kansas, due to the grounding of the plane. According to the White House Council of Economic Advisers, last year Boeing’s troubles cut gross domestic product from March through June by 0.4 percentage points.

Nor is oversight likely to get much of a boost from the Trump administration. Donald Trump has used two executive orders to cut regulatory oversight and hand more of that supervision over to businesses. Trump’s 2019 budget proposed an 18% cut to the transportation department.

Boeing sacked Dennis Muilenberg, its CEO, in December. The FAA has a relatively new administrator. Both organisations have promised change but there is still little sign that Boeing, the FAA or the Trump administration are really prepared to put human lives ahead of the bottom line.
Add Comment