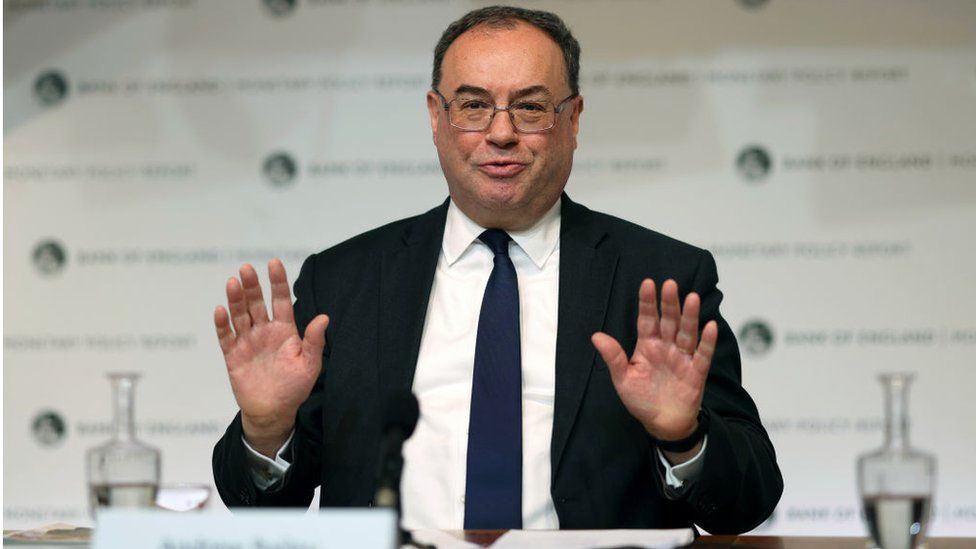 The Bank of England could raise rates by as much as 0.5% at its next rates meeting, its boss said as he pledged to get inflation under control.

However, Andrew Bailey said such a move is "not locked in" in a speech to City leaders on Tuesday.

Data on Wednesday is expected to show June's inflation picked up from May's 40-year-high of 9.1%.

The Bank is tasked with trying to wrestle that figure back down to 2%.

Mr Bailey, the Bank Governor, said in a speech at Mansion House that a 50 basis point rise - from 1.25% to 1.75% - will be one of the options for the Monetary Policy Committee when it next decides on rates on 4 August.

"At the MPC's last meeting we adopted language which made clear that if we see signs of greater persistence of inflation, and price and wage setting would be such signs, we will have to act forcefully," he said.

"In simple terms this means that a 50 basis point increase will be among the choices on the table when we next meet.

"50 basis points, and anyone who predicts that is doing so based on their own view."

For at least the past seven years the Bank has dropped and raised rates in 0.25 percentage point increments.

But the inflation figures for June, which the Office for National Statistics will put out on Wednesday, are widely expected to have risen again from May's 9.1%, well wide of the Bank's 2% target.

The Bank has forecast that the pace of price rises will top 11% in October.

"Let me be quite clear, there are no ifs or buts in our commitment to the 2% inflation target. That's our job, and that's what we will do," the Governor said.

But it is a daunting task at this time.

"From the perspective of monetary policy, these times are the largest challenge to the monetary policy regime of inflation targeting that we have seen in the quarter century since the MPC was created in 1997," Mr Bailey added.

Factors pushing up inflation include the reopening of the economy as it recovers from the Covid pandemic, a shortage of UK workers and Russia's war against Ukraine.

"The big external shocks - from Russia and supply chains - account both for a large part of the inflation overshoot above target and for the squeeze on real incomes," he said.

"My sense of the latest data is that the supply chain goods shock has started to ease, but the Russian impact - particularly on natural gas prices in Europe, is going the other way as we look ahead to the winter.

"The effect of these shocks has been to increase the cost of things we import relative to things we produce domestically," he said.

Meanwhile, in his first speech as Chancellor, Nadhim Zahawi said inflation will be brought back under control by the government.