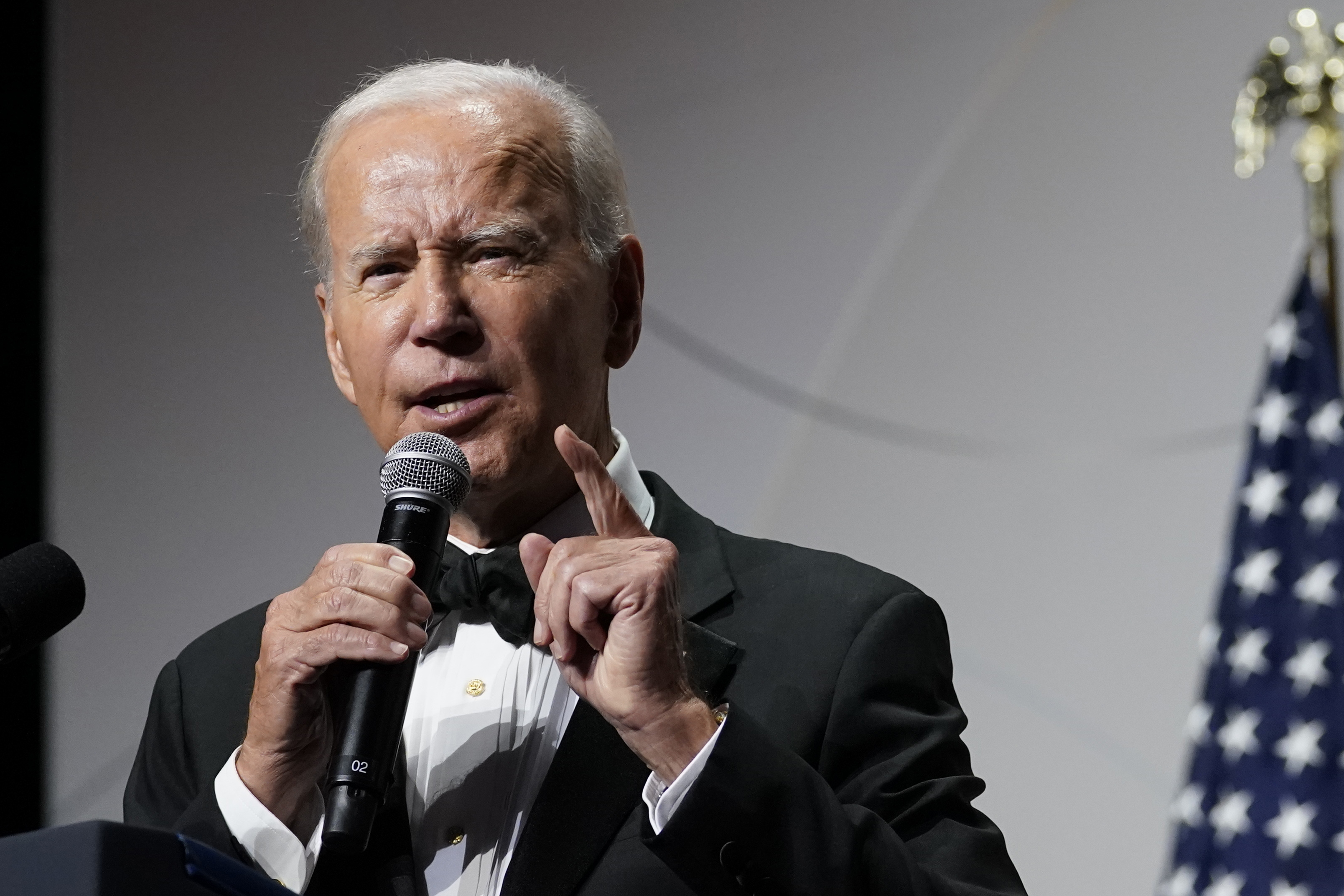 The president will head to London for the queen's funeral, then speaks to the U.N. to urge support for Ukraine.

The midterms may be closely approaching. But Joe Biden’s focus, for the next week at least, will be firmly on matters overseas.

The president returns to the international stage over the next few days to pay tribute to allies and exhort democracies — amid an audience where he arguably shines brighter than he does at home — before making that shift into a midterm political blitz.

With the success of Ukraine’s counteroffensive against Russia providing an inspiring backdrop, Biden will take his case to the United Nations next week, urging for the world to rebel against Vladimir Putin’s unprovoked war. And before that, he heads to the United Kingdom for the funeral of Queen Elizabeth II. He will pay tribute to the long-reigning monarch who, as a teenage princess in World War II, did her own part to stand up to a dictator.

Biden will then largely set aside diplomacy for a six-week barrage of domestic campaigning. But White House aides believe that the pair of consequential gatherings before then, in two world capitals — London and then New York — will provide the president with a welcoming stage.

He will use it, aides said, to push back against autocratic forces threatening the globe.

Some of that will be aimed at Beijing, much of it at Moscow. And with the eyes of the world upon him, Biden will utilize his U.N. speech to urge support for the ragtag group of fighters — reinforced with Western weapons — who are putting up stunning victories against a much larger war machine.

“There’s a sense of momentum here by the Ukrainian Armed Forces,” said John Kirby, coordinator for strategic communications at the National Security Council. “And so what we’re going to do is continue to support them as best we can.”

There will be no overt politicking at what will likely be one of the grandest funerals the world has ever seen.

Biden and first lady Jill Biden were set to board Air Force One on Saturday for the flight to London, two days ahead of the funeral for the queen. Elizabeth, as a princess, worked as a mechanic in the war effort against Adolf Hitler’s Germany and, after becoming queen, presided over a nation that has remained a bulwark for democracy.


The monumental funeral will draw leaders from around the world, many leaving behind their entourages and luxury vehicles for a day to pay their respects. Putin will not be there. But Biden, who met the queen last summer, will be among the mourners. Aides plan for him to have at least some informal time with a number of allies, including Britain’s new prime minister Liz Truss, who came to power only days before the queen’s death.

But in London, any conversations about the war a few thousand miles to the east will be whispered. In New York a few days later, it will be center stage.

Biden’s address to the U.N. General Assembly was postponed one day due to the funeral, with the president now set to take the stage on Wednesday. Aides have worked for weeks on the speech. They view it as the latest in a series of high-profile opportunities for Biden to place the battle in Ukraine into his larger view that the next century will be defined by the battle between democracies and autocracies.

The first opportunity was at the State of the Union, delivered just days after Russia’s February invasion. That was followed by a pair of summits in Europe — in Poland in March, Spain in June — in which Biden tried to hold his coalition together. And now this speech at the United Nations — its first full-fledged General Assembly since before the Covid pandemic — comes at a particularly consequential moment in the war.

Biden’s support for Ukraine has not wavered even as Russia marked the spring with grinding, but steady progress in the nation’s east. Now, momentum appears to lie with Ukraine, which improved cooperation and intelligence sharing with the United States in recent weeks to launch a two-pronged counteroffensive that took Moscow by surprise. But U.S. military officials have cautioned that it was too premature to celebrate, warning that Russia was still well fortified in much of the region and could soon regroup.

Moreover, fears have grown of a difficult winter in Europe, which will largely be cut off from Russian energy as temperatures begin to fall. Biden aides have long viewed the upcoming winter as the war’s most difficult season, one in which the fighting would largely freeze in place and also test the resolve of Europe’s support for Ukraine.

Biden aides believe Ukraine’s recent wins prove it remains worth it for Europe to stand with Kyiv. The president, they previewed, will hammer that point home from the rostrum in Turtle Bay, calling for the continent to stiffen its steadfastness as the United States continues to funnel billions of dollars of weapons and supplies to the Ukrainian resistance.

Biden will also urge nations to further isolate Putin. Aides were still weighing how directly Biden will call out nations that he sees aren’t doing their part to help — whether it be China for not condemning the war or India, which has yet to commit to participating in a price cap on Russia oil. Biden advisers watched with interest on Thursday as Chinese President Xi Jinping hailed Putin as an “old friend” at a summit in central Asia. But officials noted there were still no signs that Beijing was violating sanctions by directly aiding Moscow.

Next week’s speech in New York will act, in many ways, as a precursor for what is poised to be one of the most significant multinational gatherings in decades. The G20 will gather in November in Indonesia, where aides are working toward Biden and Xi having their first in-person summit since the president took office.

But the meeting between the two rival superpowers won’t even be the headliner in Bali. The Indonesian government has confirmed that Putin will also attend, potentially bringing him face-to-face with Western leaders for the first time since launching his invasion.

Officials have said that Ukraine’s president Volodymyr Zelenskyy was also considering attending — it would be his first time leaving his country since the war began — which could potentially set up a confrontation with Putin. But officials cautioned that plans were preliminary. Either way, Biden was poised to carry the banner of democracies to the Southeast Asia summit.

“I believe the response to the war is so far the most important and successful aspect of his foreign policy,” said Richard Haass, the president of the Council on Foreign Relations, ahead of the UN speech. “It encapsulates his core foreign policy inclination, which is an alliance-based response to tyranny.”