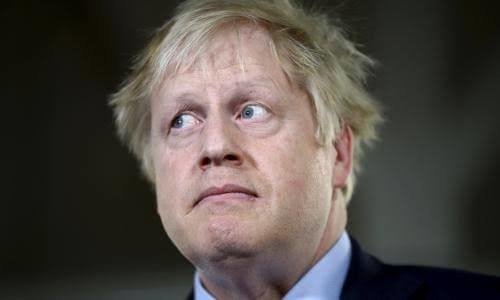 Andrew Neil has laid down the gauntlet to Boris Johnson by challenging him to the BBC interview he has so far refused to commit to, saying it was “a question of trust” for the prime minister.

Gazing directly down the camera to an audience of millions, Neil said Johnson was the only leader of a main party not to have faced a prime-time grilling by him.

“We have been asking him for weeks now to give us a date, a time, a venue. As of now, none has been forthcoming,” he said. “It is not too late. We have an interview prepared, oven-ready as Mr Johnson likes to say.

“The theme running through our questions is trust, and why at so many times in his career in politics and journalism, critics and sometimes even those close to him have deemed him to be untrustworthy.”

Neil ran through a string of Johnson’s policy proposals, including the disputed figures of 50,000 new nurses, 40 new hospitals, and an extra £34bn of funding for the NHS, questioning whether the prime minister could be trusted to deliver on his promises.

“He vows that the NHS will not be on the table in any trade talks with America. But he vowed to the DUP, his unionist allies in Northern Ireland, that there would never be a border down the Irish Sea. That is as important to the DUP as the NHS is to the rest of us. It is a vow his Brexit deal would seem to break.”

Neil ended the monologue, which came following his interview with Nigel Farage, by saying: “The prime minister of our nation will, at times, have to stand up to President Trump, President Putin, President Xi of China.

“It was surely not expecting too much that he spend half an hour standing up to me.”

“It is not too late. We have an interview prepared. Oven-ready, as Mr Johnson likes to say”

Andrew Neil issues a challenge for Boris Johnson to commit to an interview with him, to face questions on why people have “deemed him to be untrustworthy”https://t.co/daHLxEYn4r pic.twitter.com/oQ21uDdtJe

Neil has already interviewed Labour leader Jeremy Corbyn, the SNP’s Nicola Sturgeon, Lib Dem leader Jo Swinson and Brexit party leader Farage, in a week in which the BBC came under scrutiny for failing to secure an interview with Johnson.

The prime minister on Thursday also declined to take part in an interview with ITV’s Julie Etchingham, despite every other leader of the main political parties participating in an interview on the programme.

Johnson has faced mounting criticism for vetoing other programmes during the election campaign, including a climate leaders debate on Channel 4, where he was replaced with an ice sculpture, and a head-to-head debate with Jeremy Corbyn on 24 November.

A spokesman for ITV said: “The ITV News team making the Boris Johnson Tonight film made the original bid for the prime minister when the election was called.

“They have contacted his press team on repeated occasions with times and dates offered to film an interview.

“Boris Johnson’s team have today confirmed he will not be taking part.

“The programme will instead feature a profile of the prime minister using fresh interviews with other contributors and archive footage.”

“He’s running scared because every time he is confronted with the impact of nine years of austerity, the cost of living crisis and his plans to sell out our NHS, the more he is exposed.”

Labour escalated its ongoing complaint about BBC bias and allowing Johnson to “pick and choose” his BBC platform, in an open letter to the BBC director general, Tony Hall, on Thursday.

Labour’s co-campaign coordinator Andrew Gwynne said the BBC had given Labour a “clear understanding that Boris Johnson had agreed” to the Neil interview.

“Instead, the BBC allowed the Conservative leader to pick and choose a platform through which he believed he could present himself more favourably and without the same degree of accountability.

“This clearly broke the agreement the Labour party made with the BBC in good faith.”

Labour’s letter claimed that the BBC “does not have a role as a protagonist in the general election” and suggested the BBC was effectively “complicit in giving the Conservative party an unfair electoral advantage”.

On Friday the BBC insisted it would not allow Johnson to appear on its flagship politics programmes until he had agreed a time to sit down with Neil, but on Sunday he appeared on the Andrew Marr Show following the London Bridge terror attack.