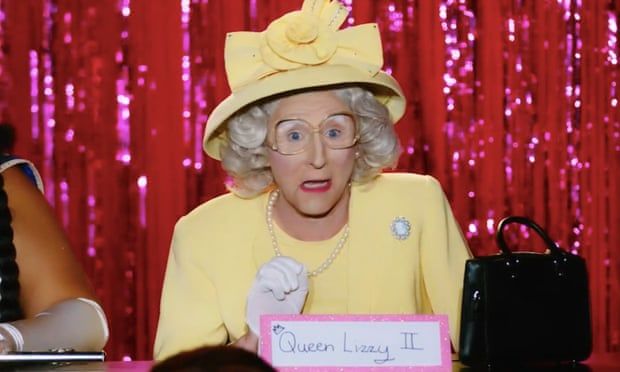 Joke in Australian version at expense of Queen’s scandal-hit son deemed not suitable for British audiences
The BBC is embroiled in a bizarre row about censorship, the royal family and drag queens after editing an episode of RuPaul’s Drag Race to remove a joke about Prince Andrew.

The national broadcaster is currently showing episodes of the new series RuPaul’s Drag Race Down Under on its iPlayer streaming service but edited out a comment made by a drag artist dressed as Queen Elizabeth II, apparently in the belief it could offend UK audiences.

Viewers of the original Australian broadcast saw performer Anita Wigl’it, dressed in full drag as the British monarch, ad-lib the comment: “I wish a dingo would have taken my baby, then I wouldn’t have anything to do with Prince Andrew any more.”

The BBC decided British viewers should not have to listen to the remark, made in a segment of the show where performers compete to make crude comments, and deleted it before the episode was broadcast in the UK.

A spokesperson for the BBC confirmed the change but did not elaborate on exactly why the comment was deemed inappropriate for British ears: “The BBC occasionally makes edits to acquired programmes in accordance with UK audience expectations.”

Prince Andrew has had a reduced public profile since his disastrous BBC Newsnight interview last year about his relationship with the deceased paedophile Jeffrey Epstein, stepping back from all of his royal duties. The prince has repeatedly declined to travel to the US to discuss the case with American authorities but insists he has done nothing wrong, despite US prosecutors declaring him “uncooperative”.

The BBC has struggled to judge the tone of its coverage of the royal family in recent months, with its decision to dedicate all its broadcast channels to the death of Prince Philip attracting a recordbreaking number of complaints. At the same time, the broadcaster also received a smaller – but still substantial – number of complaints from viewers who felt the coverage was not sufficiently reverential towards the royal family.

A second in-character joke by Anita Wigl’it about Prince Philip, filmed before the Duke of Edinburgh’s death, was also shown in the original broadcast but deemed inappropriate for British audiences by the BBC.

The edits to Drag Race came at a time when the BBC’s director general, Tim Davie, is battling with a government trying to stamp its authority on the national broadcaster, with Conservative MPs accusing the BBC of being unpatriotic and failing to promote the union flag in its publications. Davie was also accused of curbing leftwing comedy programmes that have been unpopular with leading Tories.

Drag Race Down Under was filmed in Auckland earlier this year and features contestants from Australia and New Zealand. It is the latest international spin-off of the booming Drag Race franchise, joining the BBC-produced British version, which has been a hit for the national broadcaster.

Strangely, other Drag Race Down Under jokes about the royal family did make the BBC broadcast, including one in which the drag character of Elizabeth II said her advice to Meghan, Duchess of Sussex was “don’t piss me off – and wear a seatbelt”. British viewers were also allowed to watch a drag queen about to don Queen drag declare: “When somebody turns 100 I write them a letter – and when somebody turns 16 Prince Andrew writes them a text.”
Add Comment