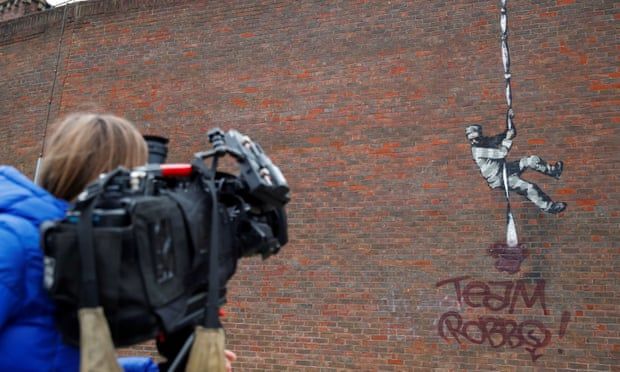 A mural by Banksy on the side of a former prison in which Oscar Wilde was incarcerated has been defaced with red paint.

The artwork, which appeared on a red brick wall of what was once Reading prison, showed an inmate escaping lockdown using a knotted spool of paper from a typewriter.

It was created overnight on 28 February and was officially confirmed as a Banksy on 4 March, when the elusive street artist posted a video on his Instagram account. 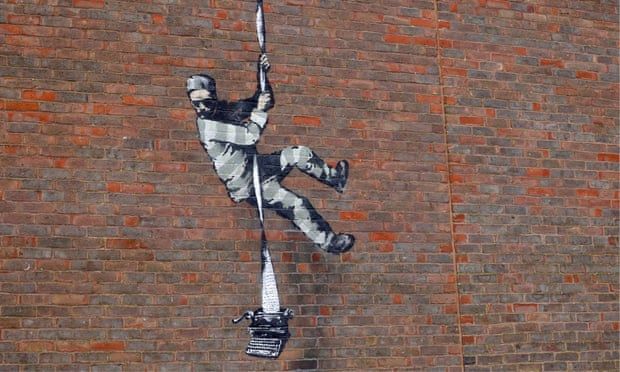 On Tuesday, photographs emerged that showed the piece, entitled Create Escape,defaced with red paint covering the typewriter, with the phrase “Team Robbo” below.

This is believed to be a reference to the graffiti artist King Robbo, who was in a long-running feud with Banksy before his death in 2014. Their rivalry is believed to have begun in 2009, when Banksy painted over one of King Robbo’s tags by Regent’s Canal in Camden, north London.

Save Reading Gaol, a campaign to turn the former prison into an arts and culture hub, tweeted on Tuesday:

Banksy confirmed that the work was his in a video told in the parody of an instructional art video and set to archive commentary from an episode of The Joy of Painting with Bob Ross.

It shows Banksy picking up and carrying a ladder, then picking out spray cans, in the dark. He places a stencil for the piece of the wall of Reading prison and sprays it with paint.

Wilde served two years’ hard labour at the prison after being convicted of “committing acts of gross indecency” in 1895.

Although the site closed to prisoners in 2013, its future is the focus of fierce debate. Reading borough council was due to submit a bid for the site to the Ministry of Justice by Monday. There are fears that if the bid is unsuccessful, the Grade II-listed site could be sold to property developers.

The campaign to turn the former prison into an arts hub has won the support of the actors Stephen Fry, Dame Judi Dench, Sir Kenneth Branagh, Natalie Dormer and Kate Winslet.

A spokesperson for the council said at the time the piece was confirmed: “We are thrilled that Banksy appears to have thrown his support behind the council’s desire to transform the vacant Reading gaol into a beacon of arts, heritage and culture with this piece of artwork he has aptly called Create Escape.”

After his release in 1897, Wilde wrote his final published work, The Ballad Of Reading Gaol.

Reading borough council and the MoJ have been approached for comment.