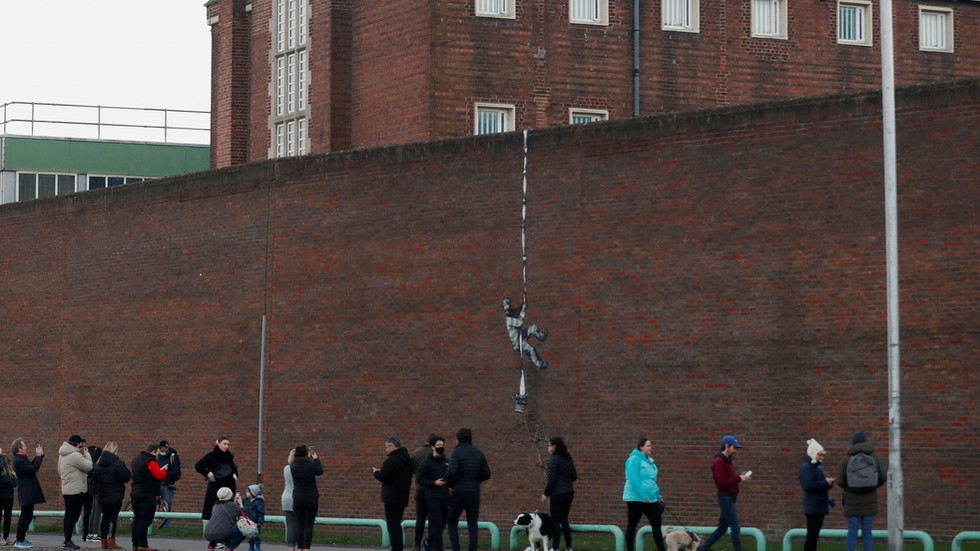 Reading Prison, which was opened in 1844 and closed in 2014, is currently being sold, and a campaign has been launched to prevent it from being bought by housing developers. However, a £2.6 million ($3.45 million) bid from Reading Borough Council was rejected earlier this year for being too low.

In an effort to secure the funding needed to seal the purchase, anonymous street artist Banksy has offered to sell off a stencil that was used to paint a mural on the side of the prison back in March, in the hope of raising £10 million.

Combined with Reading Borough Council’s offer, the artist is hoping that £12.6 million ($16.73 million) would be enough to allow the prison to be turned into an arts center.

The prison held poet and playwright Oscar Wilde between 1895 and 1897 after he was convicted of gross indecency for an affair with a British aristocrat. During his incarceration, he wrote ‘The Ballad of Reading Gaol’.

Describing Wilde, Banksy called him “the patron saint of smashing two contrasting ideas together to create magic,” claiming that “converting the place that destroyed him into a refuge for art feels so perfect.”

Banksy’s stencil was put on display at the start of December at Bristol Museum and Art Gallery, as part of an exhibition by artist Grayson Perry for his Channel 4 TV series.

Jason Brock, the leader of Reading Borough Council, has backed the offer from Banksy, although he admitted that “no detailed discussions” have taken place between officials and the artist’s representatives.
Add Comment