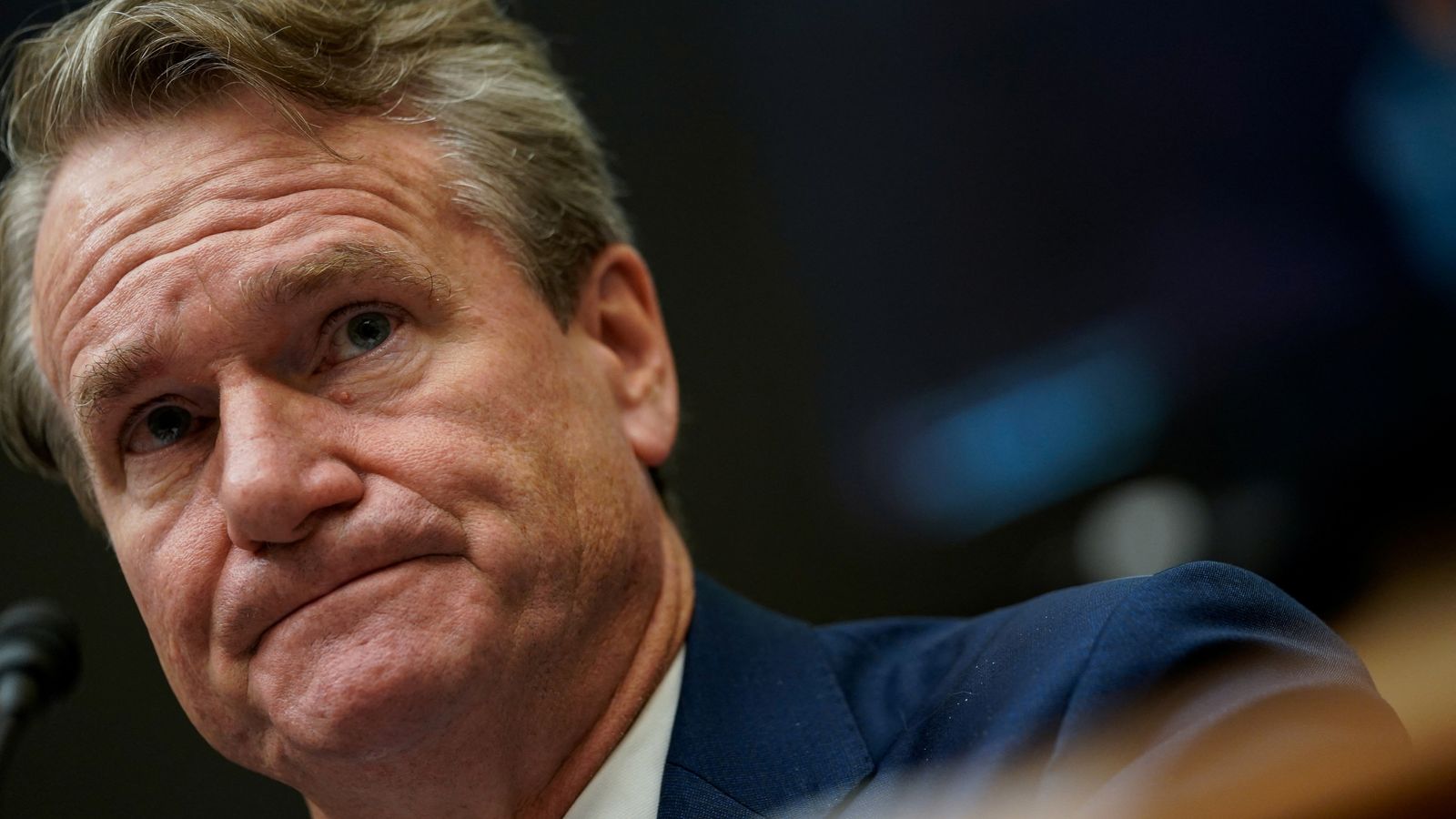 Bank of America boss commits to UK, despite recent political and economic turmoil

The bank's chief executive Brian Moynihan dismisses suggestions that he will not invest if UK corporation tax is raised.

The chairman and chief executive of one of the world's biggest banks says he is "committed to the UK", despite recent political and economic turmoil.

Brian Moynihan, of Bank of America, also told Sky News that he is not concerned about the prospect of an increase in corporation tax, adding: "We don't live or die by our tax rate."

Mr Moynihan said of the UK's recent political turbulence: "We don't get too wound-up about [elections].

"It's always something in the moment, but it's a population's job to elect officials and our job to manage our company given those elections.

"I think the UK is one of the leading economies and leading countries in the world and is a bastion of stability in general sense.

"And we've got to go through a midterm election in the US, we've got to get to the other side of that, and then stability can settle in.

"So we always say our company's been around for 230-plus years, we've been through a lot of elections, and our job is just to manage through them."

Bank of America is the second-largest bank in America with a market capitalisation of nearly $300bn (making it roughly 10 times bigger than Barclays, Lloyds and NatWest, and more than three times bigger than HSBC).

It has about 5,000 employees in the UK, mainly in London but also Chester and Bromley.

Mr Moynihan - one of the longest-serving Wall Street chief executives - has been leading Bank of America since 2010 over which time the share price has returned 175%.

He addressed the very difficult economic challenge that the new UK prime minister faces, but was not too upset at the prospect of the UK corporation tax rate rising instead of falling, as had been planned by Rishi Sunak's predecessor Liz Truss.

"I think governments have to get a balance between taxation of corporations, individuals and what they spend the money on - and that's a long-term problem for all governments," he said.

"People shouldn't be bidding for people's business on tax rates, because ultimately, that leads to things which get a little out of skew.

"I think those things settle over time, they go up and they go down.

Corporation tax in the United States is 21% (with some surcharges depending state), which was lowered by president Donald Trump from 35% in 2018.

President Joe Biden has suggested it should rise again to 28%.

The UK corporation tax rate is currently 19% and due to rise to 25% by April 2023 - a rise that Ms Truss planned to cancel, but now looks set to remain in place.

Mr Moynihan was sober about the global economic outlook, saying: "Our economists, and most economists around the world predict recessions in various economies over the next 12 to 18 months."

That said, he felt the US economy was looking resilient.

"The US economy at the end of the day, it's a consumer-driven economy.

"We see our consumers even for the first three weeks of October, they're now spending still 9%-plus over what they spent last year, which is one-and-a-half times to two times the rate they're spending pre pandemic.

"And so that's a good thing.

"Now, ahead of them, you know, we've got the Fed raising rates and slowing down the economy.

"At the end of day, [US consumers] have good credit statistics and have the ability to borrow, so that's good news."

Mr Moynihan was brought in to lead Bank of America after the financial crisis, and is always on the lookout for the next potential issue for his company and his industry, particularly following the UK's recent issue with certain pension funds having too much exposure to Liability Driven Investments (LDI's).

"And you saw some that come out when you had a particularly strong movement in gilts, in the bonds in the UK.

"But the market now loves stability…and you're seeing it settle back down given the circumstances over the last few weeks. But yeah, that was interesting. We looked around and said: Where else could this infect the economy?

"But the good news is the banking systems across the world are in pretty good shape."