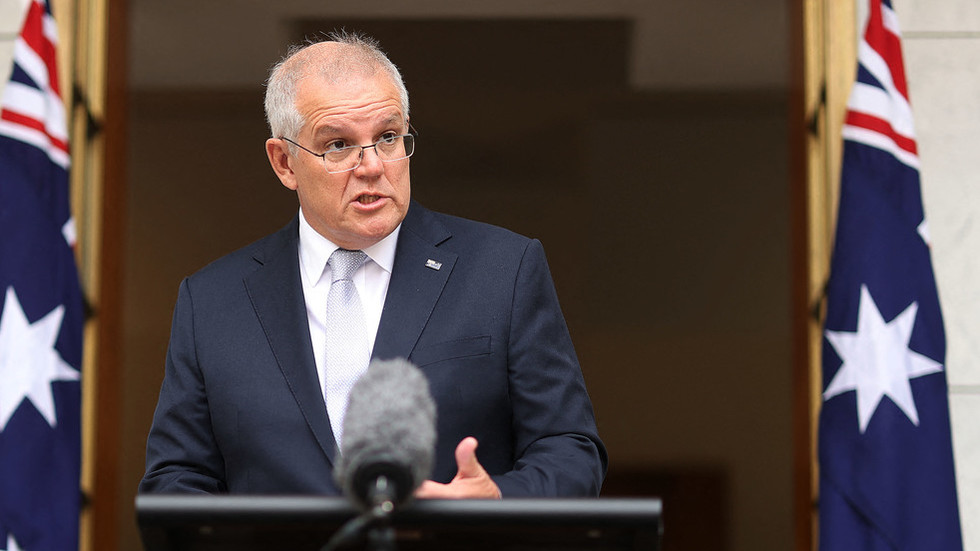 Australia's PM Scott Morrison appears to have been severely criticized in leaked messages between a fellow politician and a cabinet minister
Australian premier Scott Morrison came in for what appears to be very bad criticism from colleagues on Tuesday, when an allegedly explosive exchange of texts between former premier of New South Wales (NSW) Gladys Berejiklian and an unnamed cabinet minister was voiced to him by a famous reporter.

In the leaked dialogue, Morrison is referred-to as a “horrible, horrible person” who places politics above the people, and as a “complete psycho.”

Aired live on television, the alleged quotes were put to the prime minister at the National Press Club by political editor of Network Ten and The Australian columnist Peter van Onselen.

“I’ve got them right here. In one [Berejiklian] describes you as ‘a horrible, horrible person,’ going on to say she did not trust you and you’re more concerned with politics than people,” van Onselen said. “The [serving Liberal cabinet] minister is even more scathing, describing you as a ‘fraud’ and ‘a complete psycho’," he added, asking Morrison to comment.

Confronted, Morrison responded he didn’t know the issuer or the “basis” behind the alleged criticism, adding, “I obviously don’t agree with it, and I don’t think that is my record.”

Berejiklian, who recently stepped down from her role as NSW premier amid a corruption scandal, said in a statement she had “no recollection” of the messages and voiced support for the PM.

However, Network Ten revealed more leaked texts, in which Morrison’s handling of the national crisis during the so-called Black Summer bushfires is slammed, in an exchange apparently between the same parties. The PM, according to a ‘Berejiklian’ text, was “just obsessed with petty political point scoring” when “lives [were] at stake,” while her fellow minister is reported to have written “the mob have worked him out and think he’s a fraud.”

Morrison has been previously criticized over his handling of the bushfire crisis, and there have been tensions between him and the former NSW premier, in particular over management of the Covid-19 pandemic. Australia is expected to have a major federal election this spring, and national polls have shown the PM’s and his Liberal-Nationals coalition’s ratings falling to their lowest in years.
#COVID-19  #Covid
Add Comment