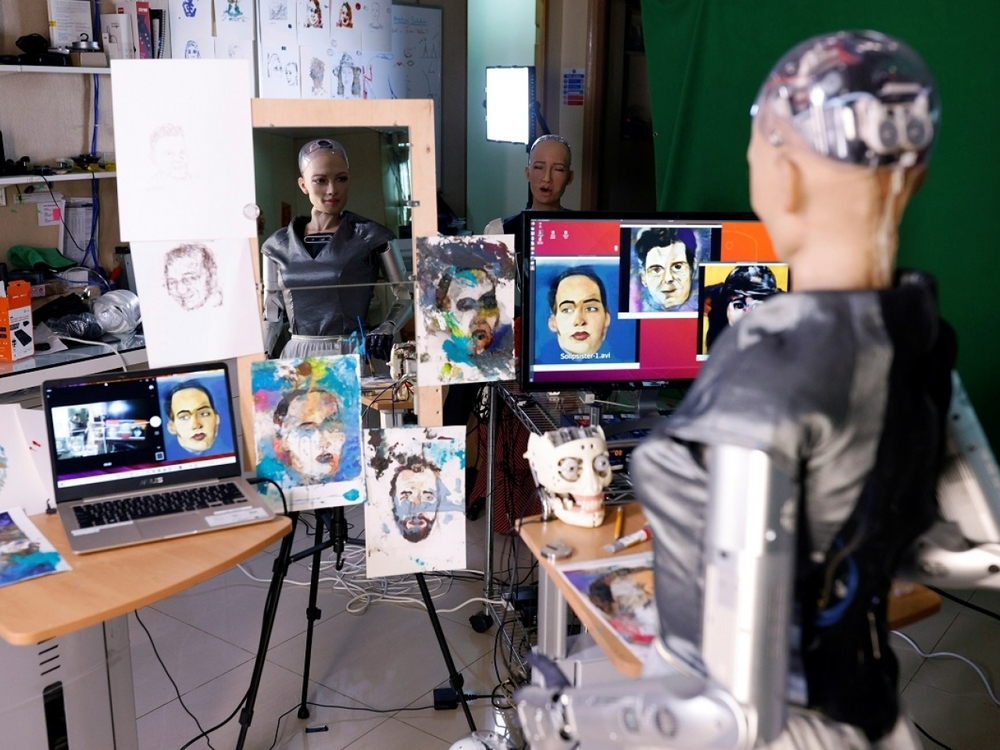 Robot artist Sophia, whose first artwork goes up for auction on Wednesday, says she draws inspiration for her work from people and is open to future creative partnerships with humans, Reuters reports.
A digital artwork by the Hong Kong-based Hanson Robotics humanoid, in the form of a Non-Fungible Token (NFT), is to be auctioned in the first sale of such pieces created jointly with artificial intelligence (AI).

NFTs, a digital signature saved on blockchain ledgers that allows anyone to verify the ownership and authenticity of items, have become the latest investment craze, with one artwork selling this month for nearly US$70 million.

"I hope the people like my work, and the humans and I can collaborate in new and exciting ways going forward," Sophia said in her studio, speaking in a flat voice.

She wore a silver-colored dress and held a pen.

Sophia, who was unveiled in 2016, produced her art in collaboration with 31-year-old Italian digital artist Andrea Bonaceto, known for colorful portraits, some of which depict

The robot has combined elements from Bonaceto's works, art history, and her own physical drawings or paintings on various surfaces multiple times in a process her creator David Hanson describes as "iterative loops of evolution."

"We use transformer networks and genetic algorithms in my art, and other kinds of computational creativity," Sophia added.

"My algorithms output unique patterns that never existed in the world before. So I think the machines can be creative."

Called "Sophia Instantiation", the digital work is a 12-second MP4 file showing the evolution of Bonaceto's portrait into Sophia's digital painting, and is accompanied by a physical artwork, painted by Sophia on a printout of her self-portrait. After the auction, Sophia will interact with the successful bidder, to study his or her face, and add a final inspired brushstroke to the artwork.

This will serve, says Hanson, "to make it a unique artwork encompassing data of the new owner and that personal connection, at that moment in time."

Bonaceto said the collaboration aimed "to make a statement in the art world, and even the technology world," heralding a new road on which AI robots and humans collaborate, enhancing each other.

Sophia's art could be "a very, very important historical piece," said Pablo Fraile, an art collector based in Miami and an early buyer of Beeple, as American artist Mike Winkelmann, creator of the NFT work sold this month for millions, is known. "It's the first time these ideas are put together."

It would pave the way for more innovation in the AI art space, he added.

U.S.-based IV Gallery will represent Sophia as an artist and promote her.

"Sophia has that unlimited freedom, like a five-year-old has, and no restrictions to what she can do," said gallery director Vincent Harrison. "It's fascinating to see this new way to create."
#Elon Musk  #Tesla

Oh ya 48 days ago
Just another example of the world slipping of the edge of reality. Feel sorry for the kids today in what the world is turning into
View all comments (1)Add comment