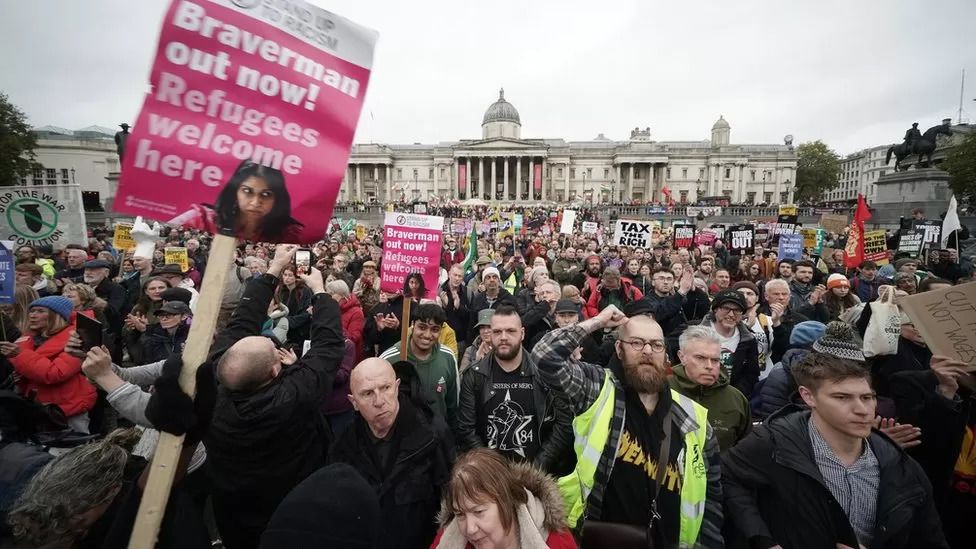 Twenty-nine-year-old Samuel says conditions at Manston were grim, with dirty toilets, cold meals and showers, and people having to search for cardboard to bed down on.

A farmer from Eritrea who was in the Manston processing centre in Kent has told Sky News he slept on cardboard and was given cold hot dogs for lunch.

The 29-year-old, who asked to be referred to as Samuel, said it wasn't what he was expecting after crossing the Channel by small boat in September and paying smugglers more than $5,000 (£4,400).

Samuel said he was cold and hungry and couldn't sleep.

And, after more than a year travelling from Eritrea, he said he was unable to have a warm shower during his four days at the immigration centre.

"They gave me cake for breakfast, hot dog for lunch and for dinner chips. For me, it was bad. The food was cold and small. I was very hungry," he said.

"We didn't have toilet paper. The toilets were dirty."

He said asylum seekers looked for cardboard to sleep on, as they didn't have mattresses.

Samuel, who told us he fled from Eritrea to avoid military service, said conditions improved when he was moved to other accommodation in London.

He said: "When people come, they need food and safety and warmth. I came here to the UK for freedom and peace."

Home Office minister Chris Philp this week underlined what a divisive issue migration is when he said asylum seekers had "a bit of a cheek" for complaining about conditions at Manston, which have been described as "wretched".

The Home Office says it has reduced overcrowding and Manston is now understood to be a few hundred over its 1,200 capacity.

After well over a week of criticism over its "broken" immigration system, Home Secretary Suella Braverman has announced the national roll-out of a scheme to speed up asylum applications.

Ms Braverman said: "It is not right that the British people are picking up a £2bn bill every year because the asylum system has been broken by an unprecedented wave of illegal migration.

"We still have a long way to go, but these steps show our commitment to tackling the asylum backlog. Processing claims more quickly will help remove those who illegally come here from safe countries, while also ensuring those in genuine need receive our protection.

"There is no one silver bullet, but we are redoubling our efforts on multiple fronts to tackle this unacceptable situation."

Braverman 'has got the message'

The Home Office says it is streamlining processes and increasing the number of asylum caseworkers.

There are currently 100,000 asylum seekers waiting for a decision on their claim.

Kent MP Roger Gale, who has Manston in his constituency, said: "I think for the home secretary, that was an eye-opener. I think she's got the message.

"We've got to get to grips with the processing of the asylum claims on the one hand, and separately, we've also got to find a long-term, pan-European international solution to an international problem."