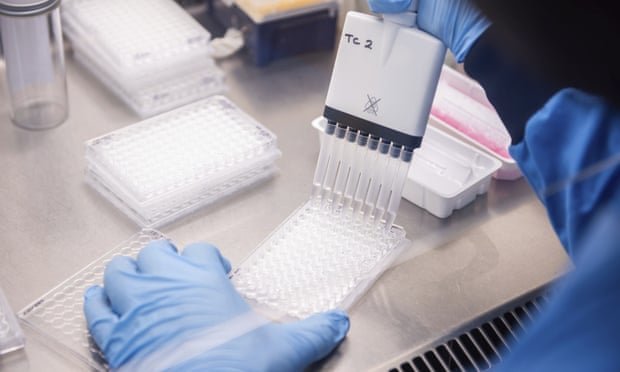 Analysts say ‘lower efficacy for higher dose’ needs explaining, as results below those of rivals
AstraZeneca shares fell after the drugmaker announced efficacy results for its Covid-19 vaccine that were below those reported by rivals Pfizer/BioNTech and Moderna. The shares ended the day 3.8% lower at £80.

Results from the phase 3 trial showed the vaccine developed with the University of Oxford can protect 70.4% of people from becoming ill and, in a surprise result, up to 90% if a lower first dose is used.

This is lower than the 95% efficacy reported for vaccines developed by the US drugmaker Pfizer and the German biotech BioNTech, and the US biotech Moderna. Analysts said the AstraZeneca/Oxford results left some unanswered questions.

Maxim Jacobs, of the investment research firm Edison Group, said: “It’s not normal for there to be lower efficacy for a higher dose, it can happen but it’s rare. There are some potential explanations, such as the vector immune response, but it’s hard to know without more data.”

James Bevan, the chief investment officer at the fund manager CCLA, told Sky News the efficacy data had been “rather less than had been anticipated by the market”.

AstraZeneca, which is Britain’s biggest pharmaceutical firm, also reiterated that it would not profit from the vaccine during the current pandemic – until at least July – by pricing “at cost”, about $3 (£2.25) to $5 a dose. This is far below Pfizer’s $19.50 and Moderna’s $25 to $37 a dose.

Neil Wilson, the chief market analyst at the trading platform Markets.com, said: “AstraZeneca shares have had a very good run this year so there is always a bit of ‘sell the news’ to this kind of thing unless it is better than expected.”

The shares slipped further after an analyst at the US investment bank SVB Leerink, Geoffrey Porges, cast doubt over whether the vaccine would be licensed in the US. Porges argued that the design of the studies did not meet the norms of the Food and Drug Administration for the representation of minorities, severe cases, previously infected individuals and the elderly.

In response, Ruud Dobber, the head of AstraZeneca’s biopharmaceuticals division, told Bloomberg TV: “In the US, we are running a trial with more than 30,000 participants, so let’s be patient to see how the FDA will react before making such harsh statements.”

Emily Field, the head of European pharmaceutical research at Barclays bank, said with the trial results out of the way, investors could concentrate on AstraZeneca’s strengths such as cancer treatment, via its oncology unit. “This will allow investor focus to return to Astra’s innovative oncology and other programmes and the company continues to offer one of the best earnings growth rates across EU pharma,” she said.
#COVID-19  #vaccine  #Pfizer  #BioNTech  #AstraZeneca  #Covid  #Vaccines
Add Comment