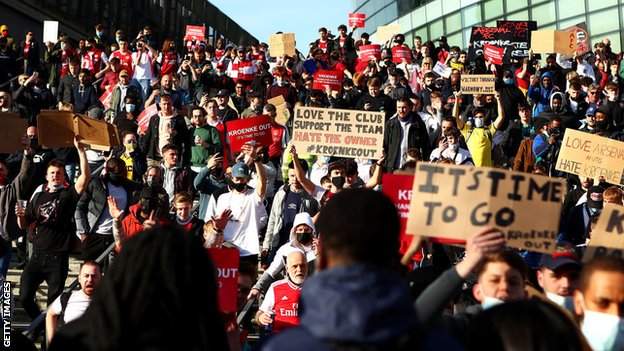 More than 1,000 Arsenal supporters gathered outside Emirates Stadium before Friday's game against Everton to protest against owner Stan Kroenke's role in the failed European Super League.

The Gunners were one of the 12 founding members of the competition before withdrawing on Tuesday.

The protestors called for Kroenke to leave the club.

Fireworks could be heard outside the stadium shortly after kick-off.

The protests follows similar ones by Chelsea fans on Tuesday.

Billionaire businessman Daniel Ek, the co-founder and chief executive of Spotify, tweeted on Friday night that he would be interested in buying Arsenal.

Around 1,000 Blues supporters had gathered outside Chelsea's Stamford Bridge ground before their game against Brighton to protest at their club's involvement.

Arsenal apologised in an open letter to their fans following their withdrawal from the Super League and said they had "made a mistake", adding they were withdrawing after listening to them and the "wider football community".

The Gunners board said they did not intend to "cause such distress" and that they joined the Super League because they "did not want to be left behind" and wanted to ensure the club's future.

"Our aim is always to make the right decisions for this great football club, to protect it for the future and to take us forward," they added.

"We didn't make the right decision here, which we fully accept."

American businessman Kroenke was appointed to the Arsenal board of directors in 2008 and became the majority shareholder of the club in 2011.