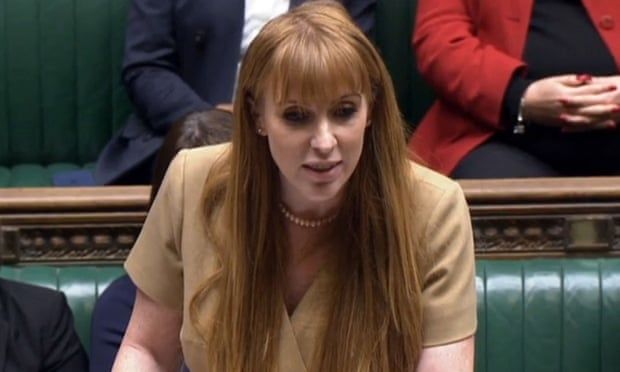 Angela Rayner hits out at ‘sexism and misogyny’ in politics

Mail on Sunday accusation of ‘Basic Instinct ploy’ criticised by cabinet ministers and MPs across Commons
Angela Rayner has hit out at “sexism and misogyny” in politics, as a storm of criticism erupted after a newspaper reported that she crosses and uncrosses her legs during prime minister’s questions to distract Boris Johnson.

The article quoted a Conservative MP saying: “She knows she can’t compete with Boris’s Oxford Union debating training, but she has other skills which he lacks. She has admitted as much when enjoying drinks with us on the [Commons] terrace.”

It also contrasted Rayner’s background, as a former care worker who left school at 16, with that of the Old Etonian prime minister. Rayner is widely regarded as performing strongly when she stands in for the Labour leader, Keir Starmer, against the prime minister.

Nokes told LBC the Mail on Sunday had a “long track record of reporting misogynistic stories about female MPs”.

She said she had contacted the Speaker, Lindsay Hoyle, to ask whether the story’s author, the Mail on Sunday political editor, Glen Owen, should have his parliamentary lobby pass revoked – and suggested her committee could examine sexism in political reporting. Owen declined to comment.

In a series of furious tweets on Sunday, Rayner hit back against the anonymous briefing, saying she was a victim of “sexism and misogyny”.

“I stand accused of a ‘ploy’ to ‘distract’ the helpless PM – by being a woman, having legs and wearing clothes,” Rayner said. She accused Johnson’s allies of “resorting to spreading desperate, perverted smears in their doomed attempts to save his skin”.

“He and his cheerleaders clearly have a big problem with women in public life. They should be ashamed of themselves. I won’t be letting their vile lies deter me. Their attempts to harass and intimidate me will fail,” she said.

Johnson tweeted on Sunday: “As much as I disagree with Angela Rayner on almost every political issue I respect her as a parliamentarian and deplore the misogyny directed at her anonymously today.” The culture secretary, Nadine Dorries, subsequently published an identically worded tweet.
Advertisement

“I like the Mail on Sunday and I enjoy reading it but I think it’s a totally ludicrous story that I don’t recognise,” he said. The former leader of the House of Commons Andrea Leadsom agreed, criticising the “totally unacceptable comments and reporting”.

The Johnson ally Conor Burns said the story was “truly poisonous,” calling it “typical of the baseless stories planted by drunk nonentities puffing up their egos on the [House of Commons] terrace”.

Westminster has been plagued by claims of misogyny and sexual harassment in recent years, and many female MPs say they continue to face a sexist culture in their workplace.

Some reports have suggested more than 70 MPs have been named in evidence to the Independent Complaints and Grievance Scheme, which investigates MPs’ conduct.

Recent cases have included Bob Roberts, who was suspended after being found to have repeatedly made unwanted sexual advances towards an aide, and David Warburton, currently under investigation over sexual harassment and drug use.

Rutland MP Alicia Kearns said: “When women in politics are consistently demeaned and denigrated for their sex and appearance, misogynists across our country are empowered.”

Rayner last confronted Johnson at prime minister’s questions in January, when Starmer was self-isolating with Covid. She challenged the prime minister over the cost of living crisis, pointing to his previous relaxed stance about inflation and asking: “How did he get it so wrong?”

In Basic Instinct, Stone plays a violent psychopathic killer, who in its best-remembered scene briefly flashes her vulva while being interrogated by a police detective played by Michael Douglas. The notorious moment was later declared the most-paused in movie history.
#Boris Johnson  #Johnson  #Covid
Add Comment