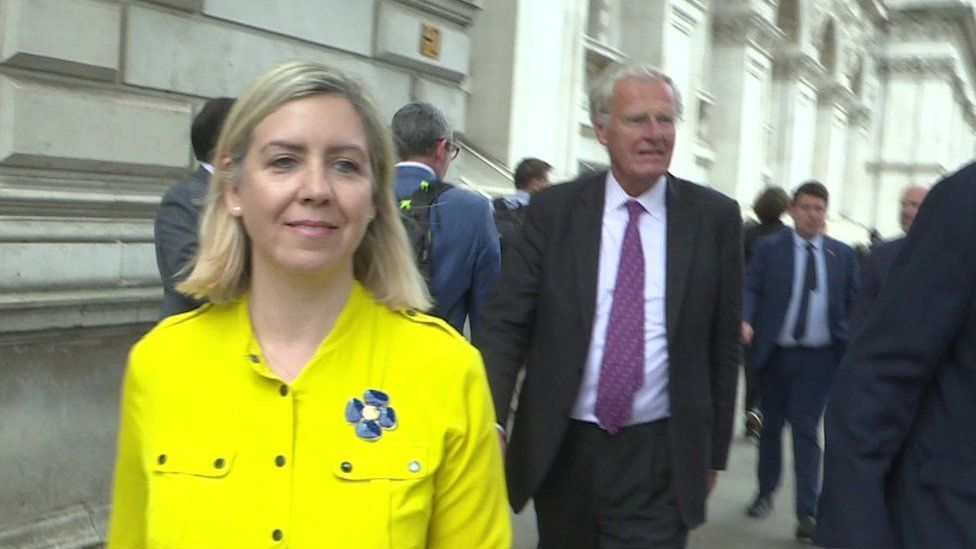 Andrea Jenkyns: Minister says she raised her middle finger because of a 'baying mob'

New education minister Andrea Jenkyns says she raised her middle finger to a crowd outside Downing Street as a response to a "baying mob".

Ms Jenkyns said she had gone to Downing Street to watch the prime minister's resignation speech on Thursday afternoon.

After a morning marked by increasing numbers of resignations from government, No 10 announced that Boris Johnson would be standing down.

Crowds celebrating his imminent departure then gathered in the area.

In videos recorded of her leaving, she told the crowd: "He who laughs last, laughs loudest. Wait and see."

In a statement on Twitter, Ms Jenkyns said she had received "huge amounts of abuse from some of the people who were there over the years".

She added: "I have also had seven death threats in the last four years. Two of which have been in recent weeks and are currently being investigated by the police, I had reached the end of my tether.

"I responded and stood up for myself. Just why should anyone have to put up with this kind of treatment."

But Geoff Barton, General Secretary of the Association of School and College Leaders, said her explanation was insufficient to explain her actions.

Writing on Twitter, he said "In my 32 years as a teacher, 15 of them as headteacher, I inevitably dealt with moments of poor behaviour and inappropriate conduct - from young people and staff.

"I have to say, 'I'm only human' was never good enough as an excuse from any of them for any of it."

The former chief whip added: "I don't seek to condone that at all."

"Andrea will have to totally justify that for herself. But I do understand emotions were running pretty high and they were pretty raw on that day.

"But I don't think that was the right thing to do at all," he said.

Ms Jenkyns, the MP for Morley & Outwood, was appointed to the role of parliamentary under-secretary of state at the Department for Education on Friday, as Boris Johnson reshuffled his caretaker government.