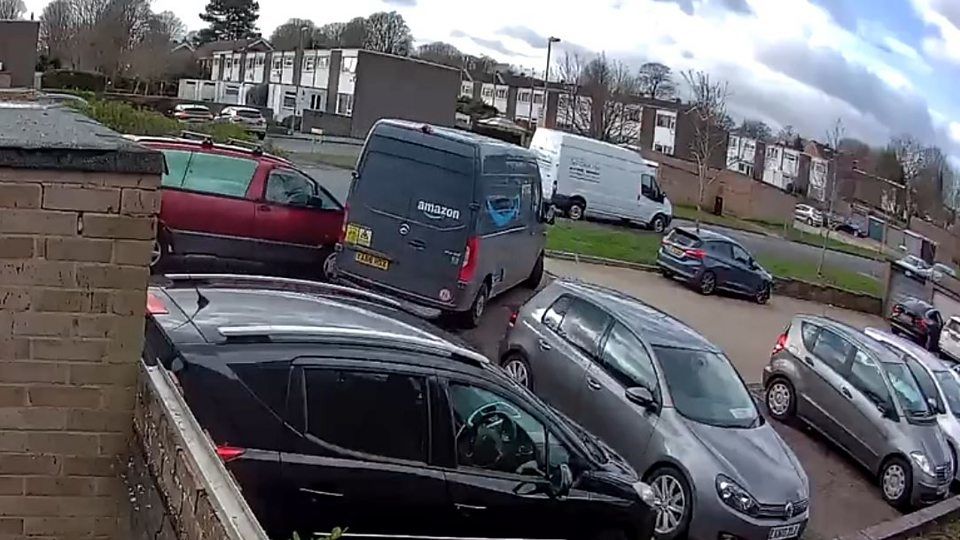 Amazon 'should pay' after driver filmed hitting car in Basingstoke

A charity volunteer whose car was filmed being hit by an Amazon delivery van has called on the retail giant to pay for the repairs.

Steven Taylor said his Toyota Estima has not been able to start since the crash in Basingstoke on 7 February.

He said the driver did not report hitting his car, which he usually uses to make deliveries and drop-offs for family support charity The Safe.

Amazon said it was working to resolve the matter "as quickly as possible".

Mr Taylor, who reported the incident to police, found the car in Packenham Road with a broken fog light, scratched paintwork and a dent to the bumper.

A neighbour captured the moment on CCTV, which shows the Amazon driver steer the van into the car before inspecting the damage and leaving the scene.

Father-of-two Mr Taylor said his insurance company had recommended the vehicle, which is 25 years old, be written off.

However, he said he would prefer to keep the car and believes the damage would cost less than £500 to repair.

He said he had repeatedly tried to contact Amazon to reach an agreement but the company "don't seem to be motivated" to help.

The company has given him the phone number for its claims team but Mr Taylor said his calls were repeatedly diverted to voicemail.

"We can't just keep everyone waiting whilst they go through some weird hoop-jumping... at the moment I can't do deliveries for the charity," said Mr Taylor.

"It's infuriating that somebody could smash into a car and then just drive off without doing anything - and then leave someone else with hundreds of pounds worth of damage."

A spokesman for Amazon said: "We are working closely with our delivery service provider to ensure this matter is resolved as quickly as possible."

The BBC has asked Amazon whether the driver would face disciplinary action and if it would apologise to Mr Taylor and the charity.

A Hampshire Constabulary spokeswoman said: "The car sustained minor damage in the incident.

"Our collision assessment team has reviewed the report and did not deem it proportionate for further investigation."