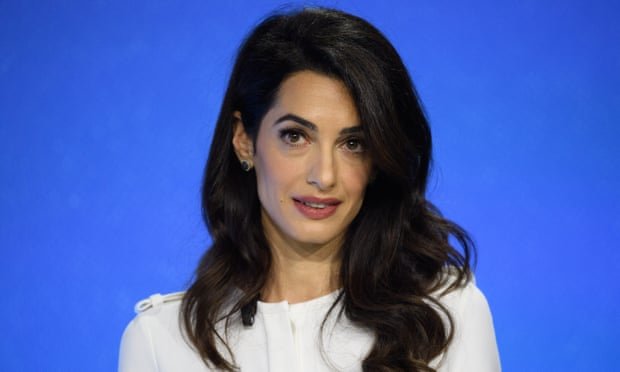 Exclusive: Prominent human rights lawyer writes to foreign secretary with stinging denunciation
Amal Clooney, the high-profile human rights lawyer, has resigned from her position as the UK’s special envoy on media freedom in protest at the government’s intention to breach international law through the internal market bill.

In a stinging denunciation of Boris Johnson’s threat to override Britain’s international treaty obligations in the EU withdrawal agreement, the barrister described the government’s actions as “lamentable”.

Her resignation letter, sent to the foreign secretary, Dominic Raab, on Friday says: “I have been dismayed to learn that the government intends to pass legislation – the internal market bill – which, if enacted, would, by the government’s own admission, ‘break international law’.

“I was also concerned to note the position taken by the government that although it is an ‘established principle of international law that a state is obliged to discharge its treaty obligations in good faith’, the UK’s ‘parliament is sovereign as a matter of domestic law and can pass legislation which is in breach of the UK’s treaty obligations’.

“Although the government has suggested that the intended violation of international law is ‘specific and limited’, it is lamentable for the UK to be speaking of its intention to violate an international treaty signed by the prime minister less than a year ago.”

Her resignation comes after Lord Keen, the UK government’s law officer for Scotland, quit on Wednesday because of his opposition to the bill. A week earlier, the government’s chief lawyer, Jonathan Jones, stepped down as ministers prepared to publish the legislation.

Clooney said she had held back from standing down since the details of the internal market bill were revealed last week, but having “received no assurance that any change of position is imminent, I have no alternative but to resign from my position”.

She added: “I am disappointed to have to do so because I have always been proud of the UK’s reputation as a champion of the international legal order, and of the culture of fair play for which it is known. However, very sadly, it has now become untenable for me, as special envoy, to urge other states to respect and enforce international obligations while the UK declares that it does not intend to do so itself.”

Johnson’s decision to renege on significant parts of the withdrawal agreement will be analysed by the 27 EU leaders at a summit in Brussels next week, with officials warning that the member states are “neither intimidated nor impressed” by Downing Street’s ploy.

The EU’s chief negotiator, Michel Barnier, will update the heads of state and government on all the latest developments but sources in Brussels said there would be no debate or strategising by the EU. “There is not a lot to to discuss,” said one source.

Labour’s Chris Matheson, the shadow media minister, said: “It is humiliating that the UK’s special envoy on media freedom has felt unable to continue in her role. This shows that by threatening to break international law instead of getting Brexit done as we were promised, the government is trashing the UK’s reputation around the world.”

Clooney’s letter, released through the International Bar Association in London, was supported by the independent High Level Panel of Legal Experts on Media Freedom.

David Neuberger, the chair of that panel and former president of the UK supreme court, said: “I agree with what Ms Clooney says in her letter of 18 September to the foreign secretary.

“I support her principled response to the shameful attitude of the UK government to its international treaty obligations in the internal market bill and in ministerial announcements that it is prepared to break international law.”

Lord Neuberger said Clooney’s role as an envoy was distinct from her position as deputy chair of the panel, which she would continue to hold.

He said: “Journalists who are persecuted, imprisoned and even murdered for their work deserve all the help that they can get, including through legal reforms by governments that follow the panel’s advice. It is in the interest of freedom of expression and the rule of law that they get such help.”
Advertisement

Helena Kennedy QC, the director of the International Bar Association Human Rights Institute, which is secretariat to the panel, said: “I fully endorse the statements made in Ms Clooney’s letter of resignation and respect her decision to stand down as envoy while maintaining her role on the panel. Members of the panel are appointed on an unpaid basis as a result of their relevant expertise and the panel should complete its current mandate.”
#Boris Johnson
Add Comment