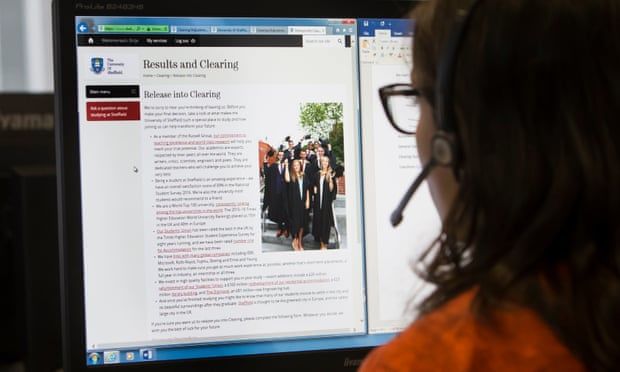 With hundreds of thousands of school leavers receiving their A-level, BTec and Scottish highers grades, university admissions officers say a surge in applications, coupled with fierce competition, means those who miss out may face a longer wait to find a course.

The number of students with a live Universities and Colleges Admissions Service (Ucas) application who do not currently hold a place is understood to be 20% higher than on results day last year, meaning many will be hoping to secure a spot in the clearing process.

Universities reported that more students than usual have met their offer conditions, as teacher-assessed results have risen by about a grade each compared with last year. That means students who narrowly missed their marks are more likely to be rejected by popular universities.

Matthew Weait, the deputy vice-chancellor of the University of Hertfordshire, said: “There will be students nationally with high grades who may still not get places at their first-choice university because there’s less capacity in higher-tariff institutions, which means more rejections. For us at Hertfordshire, and at similar universities, this has the potential to be a very busy clearing.”

On Monday, schools received notification of their students’ grades, with school leaders estimating more than 40% of entries were receiving the top A* and A grades this year. That would represent a further improvement on 2020, when 38% of entries gained the top two grades – and a rise of 13 percentage points on 2019.

Mike Nicholson, the director of admissions at the University of Bath, said his institution had planned on the basis of this year’s grades being “at least as good” as last year’s, and had seen particularly strong demand for health-related courses such as biomedicine, as well as more vocational subjects such as computing and economics.

“We’ve been seeing a lot of interest for courses and degrees that offer job security and reasonable financial returns,” Nicholson said.

He added that students who received better than expected results and were tempted to “trade up” to more selective universities – through a process known as adjustment – should be careful.

“The most popular courses are pretty full and those universities may not be interested in taking extra students. But it might be possible in some subjects such as English literature or other humanities,” Nicholson said.

At less selective universities, nursing and other health-related courses are heavily oversubscribed and are also expected to have fewer places than usual in clearing.

Admissions officers at universities including Hertfordshire, Leeds Beckett, Greenwich, the University of Central Lancashire, and Coventry said that outside health courses there would be plenty of spaces available in clearing at their institutions.

Tracey Lancaster, the deputy vice-chancellor at Leeds Beckett University, said some institutions, including hers, may not make all their vacancies available on results day due to the unpredictability of results and acceptances this year, which means there may be more available later in the clearing process than usual.

Some universities are also planning to keep spaces on hold for students who wish to appeal against their A-level results before the 7 September deadline.

Admissions officers also reported a rise in students registering in advance for clearing and booking open days, which may reflect disruption during the normal decision-making period for students.

The University of Hull is among those holding additional campus open days, and is offering free overnight accommodation to potential students who visit until 10 September.

Universities have reported that more students than usual waited longer to choose their firm and insurance choice universities, and some may be reconsidering their decision as society has reopened, with the amount of face-to-face teaching a new deciding factor for some.

Michelle Wilcox, the head of admissions at Coventry University, is expecting a “fluid market” in clearing this year in which lots of students change their minds and shop around for alternatives.

“The past year has been so tough for this cohort, they’re really going to be waiting until this week when they know what results they’ve got to make final decisions,” she said.

“In a traditional year, students would have been visiting us right from last summer when they were looking at where they might apply, we would have been on an 18-month journey together. They haven’t had that luxury.”

About 300,000 candidates across England, Wales and Northern Ireland will receive A-level results, while their peers in Scotland will be issued with Highers results. More than 300,000 in England alone will also receive BTec or equivalent vocational or technical level 3 qualifications.

Gavin Williamson, the education secretary, published a letter to teachers thanking them for their “incredible efforts over the past academic year”.

Williamson cancelled national exams in England in January as a further lockdown closed schools to most pupils. Instead grades will be awarded by teacher assessment, overseen by examination boards, and are expected to show a further acceleration in the proportion of higher grades being awarded.
Add Comment