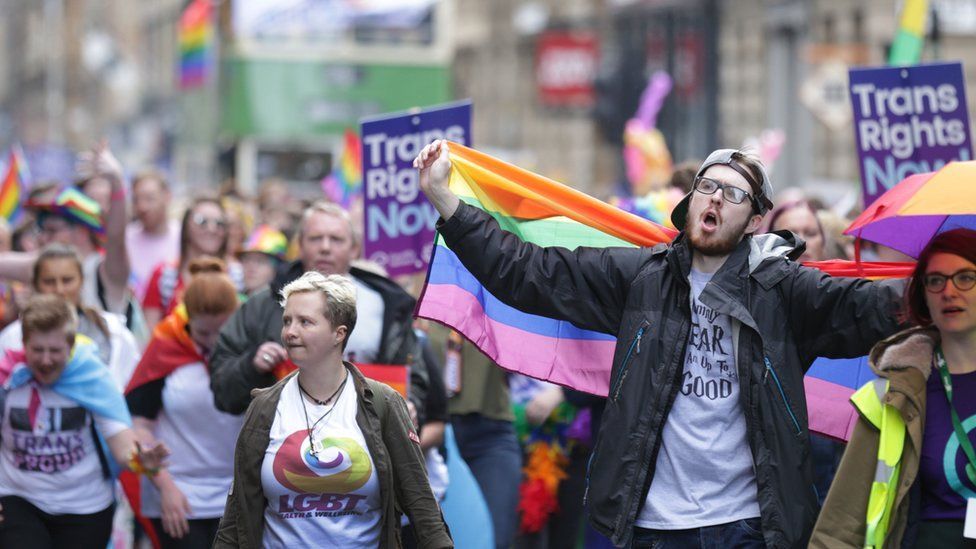 Two members of the government's LGBT advisory panel have quit after accusing ministers of not being serious about reform.

The government says it is "committed to building a country" where people are "free to live their lives as they choose".

In a second resignation, James Morton questioned the commitment to equality.

Mr Morton told the BBC the government's "failure" to mention gender identity or transgender people in the statement responding to Jayne Ozanne's resignation was the "final straw".

In an interview with ITV News , Ms Ozanne said there had been "a lack of engagement" with the group, and ministers acted against their advice.

She said one of the reasons for her resignation was to "appeal" to Boris Johnson to take action over LGBT conversion therapy - which she has been through herself.

The issue was debated in Parliament on Monday, after repeated pledges from the government - and Mr Johnson - to ban the practice.

But MPs reacted angrily when Equalities Minister Kemi Badenoch would not give a timeline for legislation, instead saying the government was "committed" to "ending" it.

Labour's shadow equality minister, Marsha de Cordova, accused the government of "a pattern of behaviour which seeks to dismiss the real impact of the discrimination experienced by so many".

The government said it would bring forward its plans "shortly".

In the interview, the campaigner, who describes herself as a gay evangelical Christian, said both Ms Badenoch and Minister for Women and Equalities Liz Truss were known amongst the LGBT+ community as "the ministers for inequality".

"I've sat in meetings and I've been astonished about how ignorant they are on issues that affect the real lives, particularly of younger people."

Ms Ozanne said she believed Mr Johnson was "a friend of the LGBT community".

But she appealed for him to take action on the gay conversion ban, saying the current proposals "do not have the confidence of the LGBT community [or] the confidence of many senior religious leaders who've also called for a ban".

Ms Ozanne also told ITV she did not believe the Conservative government had "the best wishes of the LGBT community at heart".

She added: "The language that I hear from them is of us being woke, or of being loud lobby groups, and what they don't seem to understand is the reason we have to shout is because we are hurting, because there are people who are vulnerable who are going unheard and unnoticed."

After her resignation, a government spokesman said: "The government is committed to building a country in which everyone, no matter their sexuality, race or religion, is free to live their lives as they choose.

"We have repeatedly made clear that we will take action to end conversion therapy and we are working to bring forward plans to do so shortly."

James Morton, one of the trans people on the panel, said he has been "very concerned for several months that Liz Truss and her junior ministers are not committed to LGBT equality".

"It doesn't appear that they're doing anything useful or helpful for trans people, in terms of government policy" he said.

The LGBT Advisory Council was set up in 2019 with the term of current panel members set to end on March 31st.