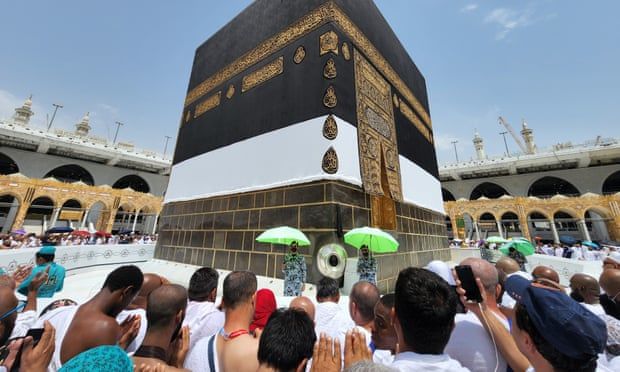 Hundreds who paid for travel through Motawif system say they missed flights after their bookings ‘failed’
Hundreds of British Muslims who booked travel to Saudi Arabia to perform the hajj pilgrimage have described their anger and frustration at being stranded in the UK despite paying thousands of pounds for flights and hotels through a flawed Saudi government-backed system.

Earlier this month, Saudi Arabia’s ministry of hajj and umrah announced that pilgrims from Europe, the US and Australia could no longer book hajj packages through travel agencies and would instead have to apply through a lottery system called Motawif.

But the new system has overshadowed a momentous religious pilgrimage for many British Muslims, as they have missed their flights despite having paid for them.

After three years waiting to perform the hajj, which he initially booked in 2020 before it was deferred due to the Covid pandemic, Muneeb Sidyot from Leicester successfully booked this year through Motawif. He was soon informed by email that his “payment was successful, but the booking has failed”. Days later, another email notified him that his “booking will be honoured” and that his flights were reserved.

Sceptical about Motawif’s assurances, Sidyot contacted his airline carrier, Saudi Airlines, 48 hours before his flight, only to be informed that he and his wife’s names were not on the flight list and that Motawif may have overbooked. “Why did Motawif take my money, if a package was potentially sold out?” he said.

Sidyot’s flight to Jeddah left Heathrow on Sunday without him and he was uncertain whether Motawif would issue a full refund. “We don’t want to lose a single penny, because we’ve not received any service at all apart from distress, and our time being wasted trying to get in touch with agents,” he said.

Despite organising leave from work and paying almost £20,000 for a hajj package for himself and his wife, Adam Ali, a healthcare professional from Preston, was also notified that his booking had failed.

Motawif claims it has a 24/7 call centre available in multiple languages. Ali spent hours fielding international calls to Motawif in France and Saudi Arabia, and to Holidayme and Umrahme, subsidiaries of Motawif’s tech partner in Dubai, Traveazy.

“It’s been a nightmare,” Ali said. “My first two weeks of leave when I should have been in hajj have basically gone sat at home doing admin work, making inquiries.”

Sidyot and Ali’s stories are common tales for prospective pilgrims left in limbo. Many have posted on Twitter using the hashtag #paidbutfailed to elicit a response from Motawif, who they say have been slow to respond. Ali created a Twitter account to get some accountability for the phantom package he had been promised after he received little to no response.

He and his wife were scheduled to fly out to Saudi Arabia from Manchester airport on Saturday. When Ali contacted his airline carrier and hotels a day before to confirm his reservations, he discovered that no reservations had been made.

The situation has been especially difficult for the couple, who have a four-year-old son with learning difficulties. Motawif gave Ali assurances they would resolve his booking issues within 72 hours. With the last flights for international hajj pilgrims approaching next week, they could be allocated a flight at any moment, which would mean having to leave their son with little notice.

“Just the thought of that was so heartbreaking for both of us,” Ali said. “We wanted to spend the last two weeks with him to give him that love [and] affection, so he wouldn’t be impacted by our absence when we went.”

For Ali and the many others like him, the anxious wait goes on to see if Motawif will deliver on its promise to reschedule their flights.