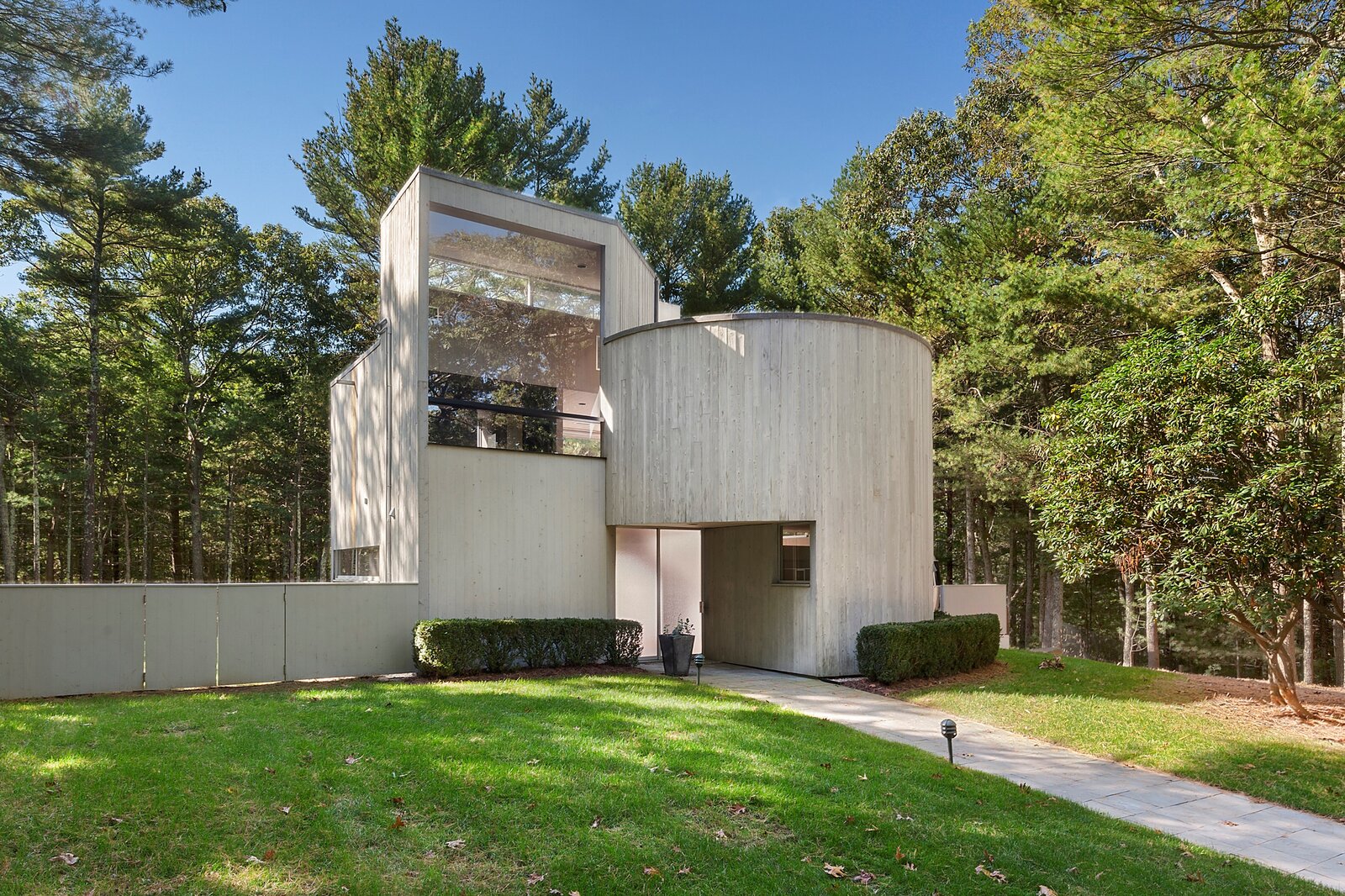 A Modernist Home by Charles Gwathmey in the Hamptons

Designed by the New York Five architect in 1967, the Sedacca House has curved walls, tall ceilings, and a charming Airstream guesthouse.

While Charles Gwathmey may be best known for his 1992 renovation of Frank Lloyd Wright’s Guggenheim Museum, the acclaimed architect started making marks in the design world decades before-beginning with the Gwathmey House, which he created for his parents in 1965.

Two years later, he completed the Sedacca House in East Hampton, New York. Widely celebrated for its geometric style, the home has only switched ownership a couple of times. Last sold in 2016, it is now seeking a new buyer for $2,500,000. 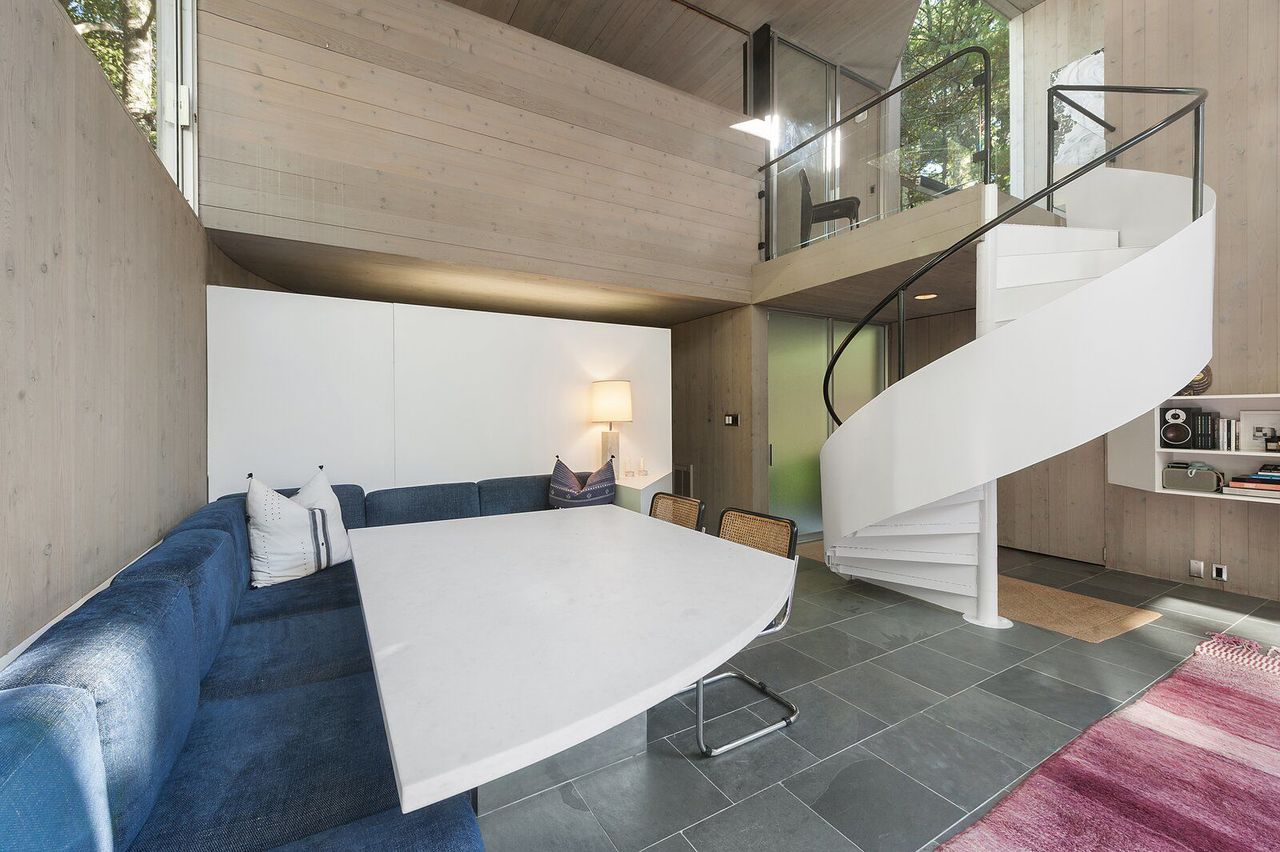 This 1967 home is one of late architect Charles Gwathmey’s first beach residences. It was originally commissioned by Joseph Sedacca, a local graphic designer who purchased the 2.8-acre lot in East Hampton, New York, for just $5,000. Here is a peek at the main living area, which showcases a sculptural steel staircase that connects the upper and lower levels. 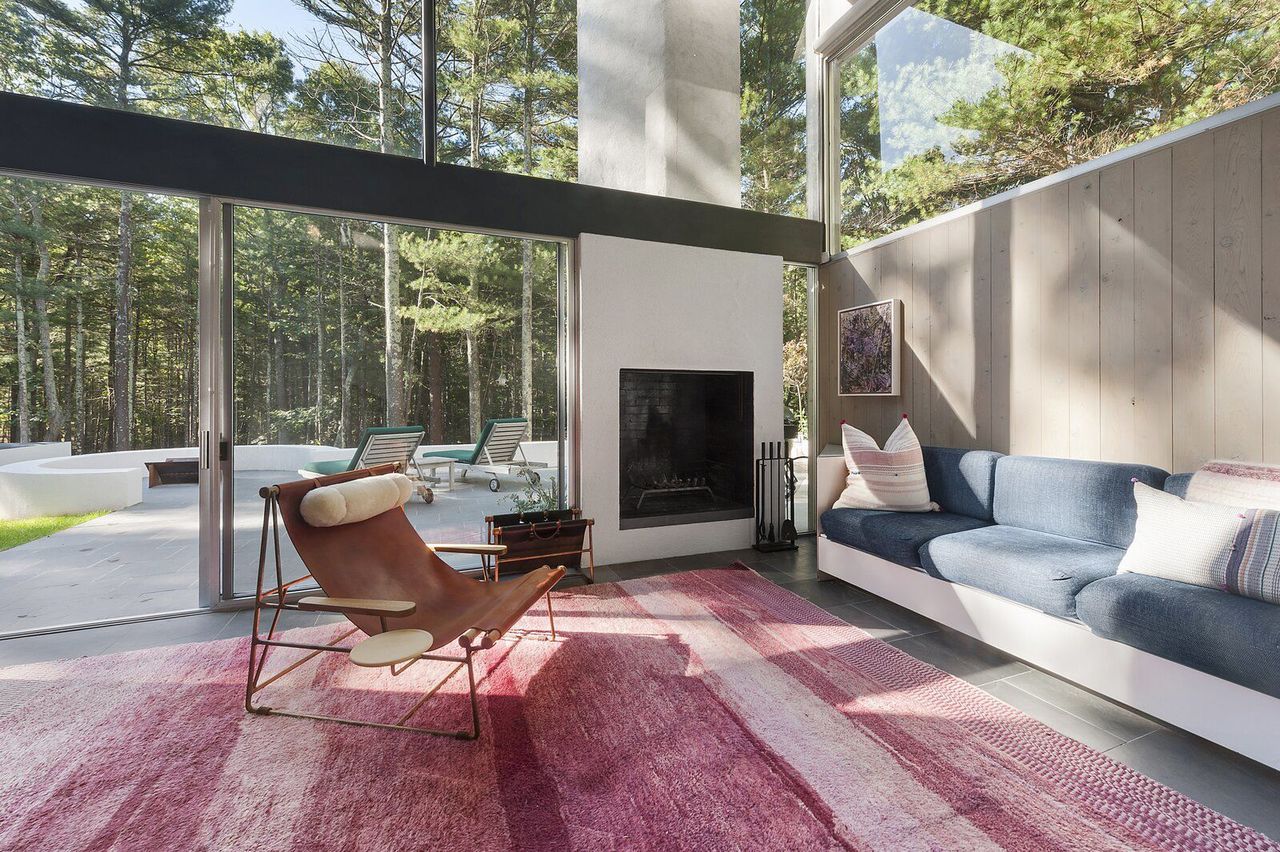 Gwathmey, who is recognized as one of the New York Five architects, designed the dwelling to encourage indoor/outdoor living. Expansive sliding doors open the interior to the backyard, where more gathering areas can be found. The original, freestanding stucco fireplace lends cozy vibes to the sleek living room.

The 1,200-square-foot dwelling is tucked away on a forested lot, and its simple material palette of wood and glass helps it blend into the site. According to a 1993 New York Times interview, Joseph Sedacca-a graphic designer who commissioned the home-granted Gwathmey full creative freedom for the project. "I had almost three acres of land, and I told Charles all I wanted were two bedrooms and a wonderful kitchen." 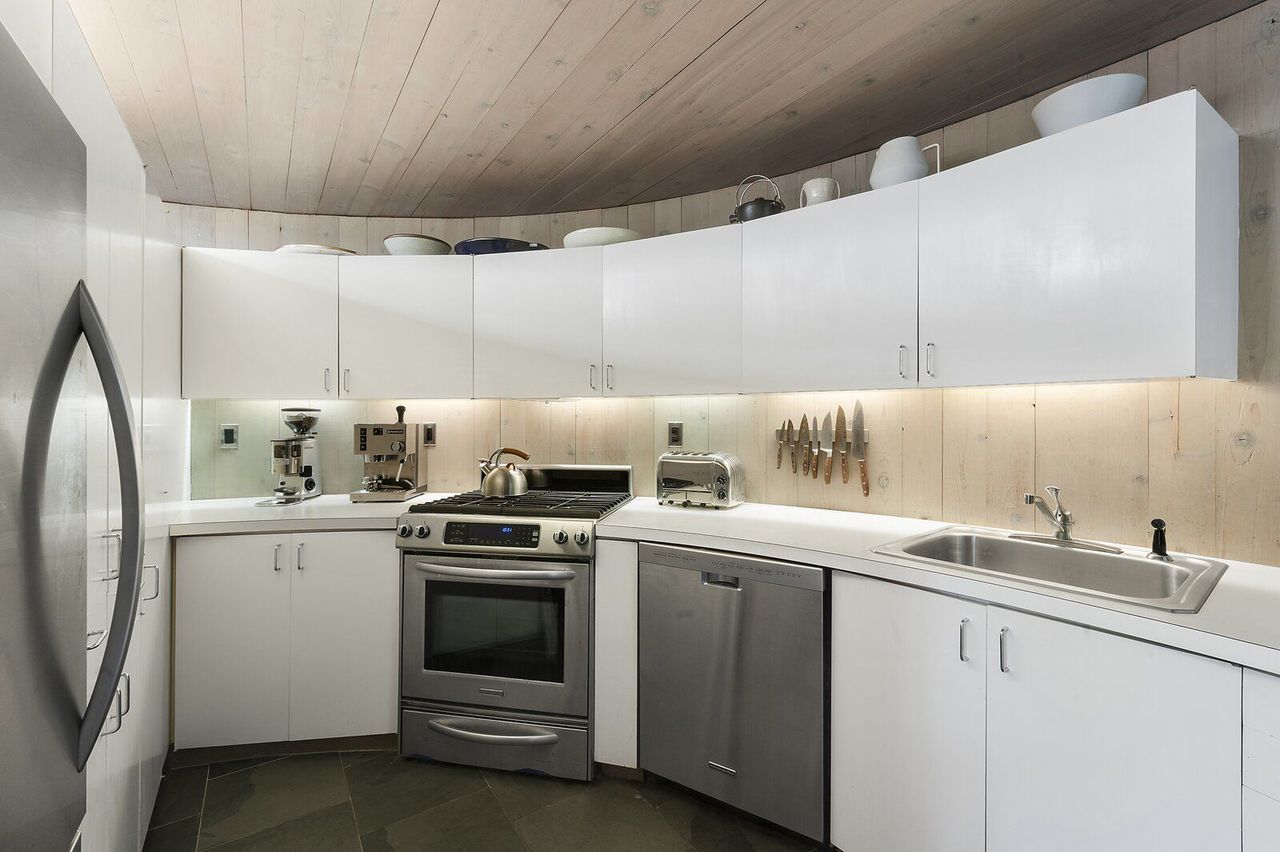 Light-hued timber lines the walls and ceiling in the kitchen, contrasting with the white cabinetry. 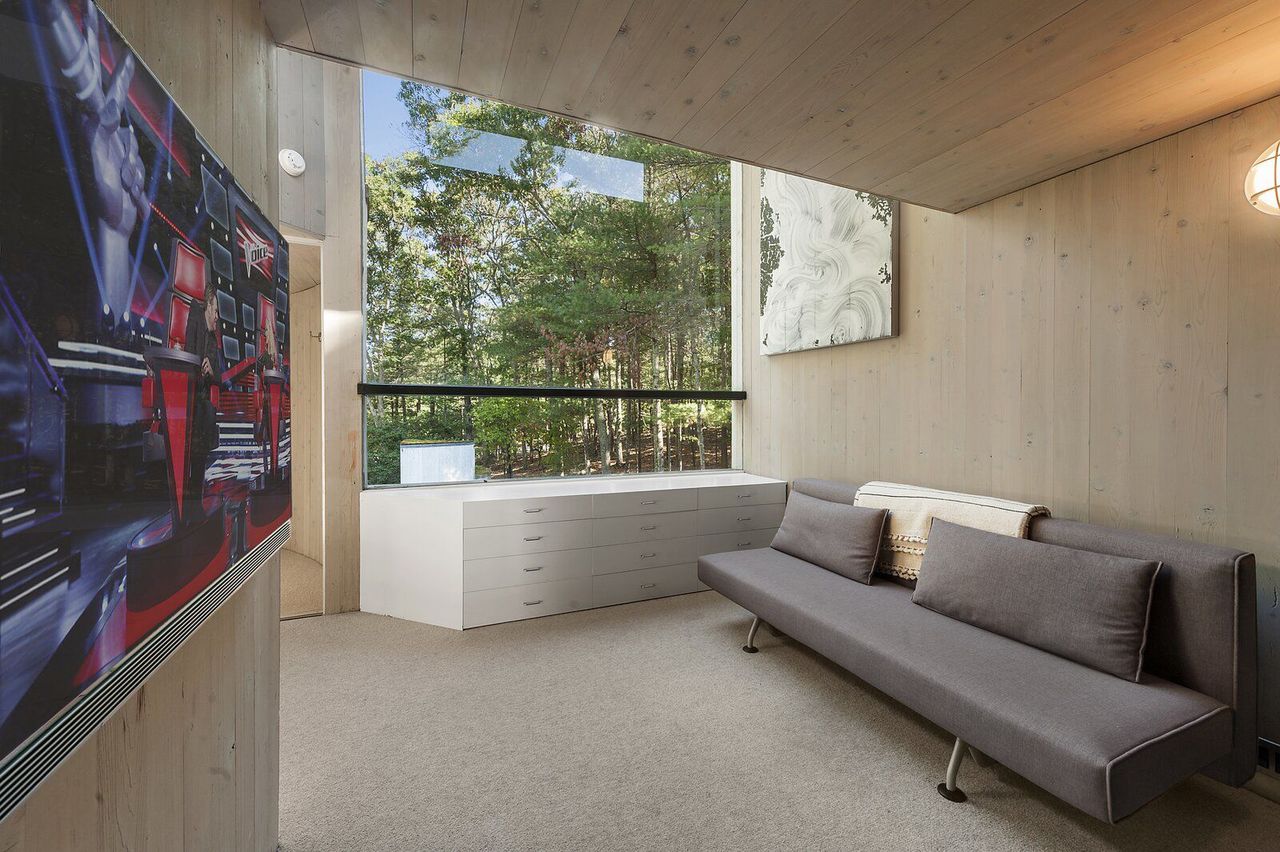 A sun-kissed lounge area on the lower floor offers a quiet place to rest and relax.

Gwathmey checked off both boxes for Seddaca-and more. With 18-foot ceilings and glass walls, the cuboid living spaces serve as the heart of the home. One of the bedrooms is nestled just steps down the hall, while the other sits on the upper level and can be accessed via a spiral staircase. 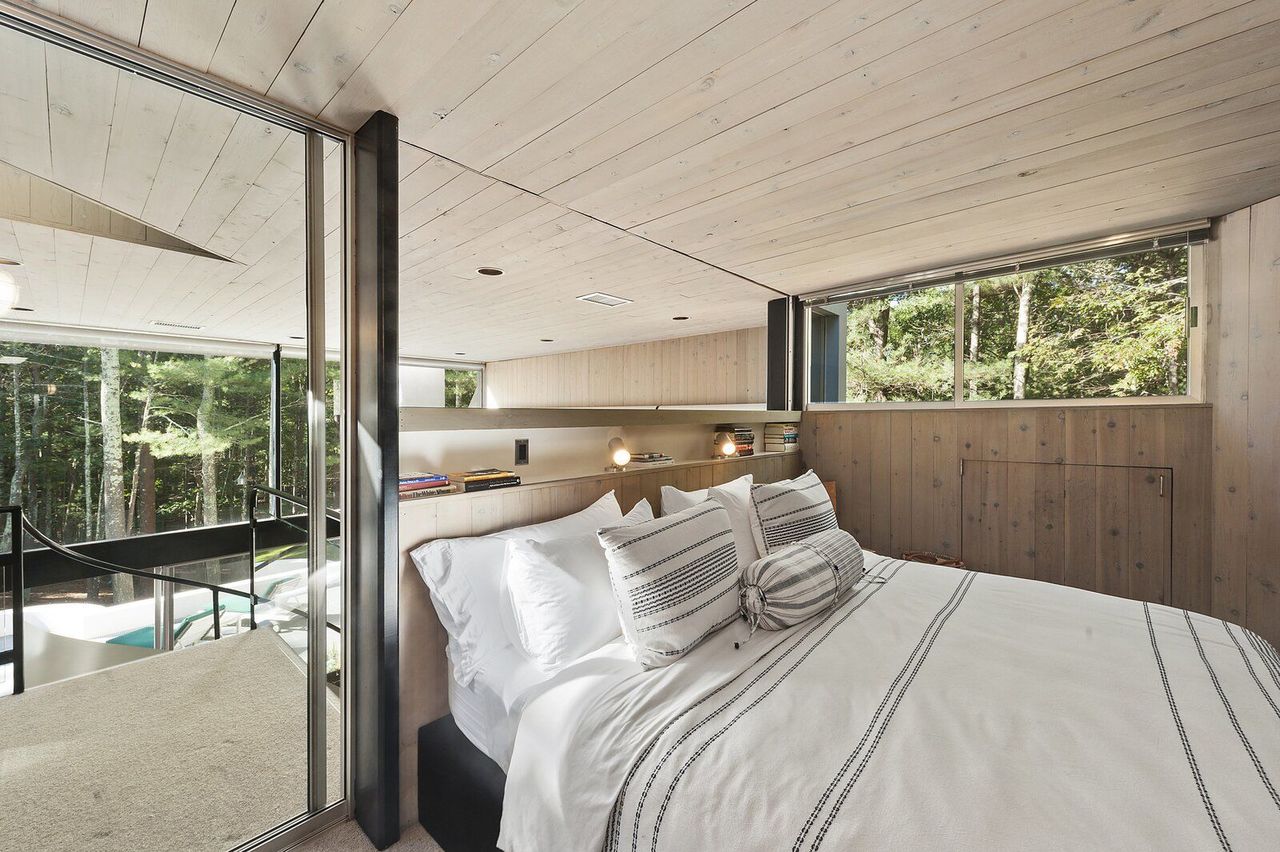 The primary bedroom is perched on the upper level, right off the mezzanine landing. 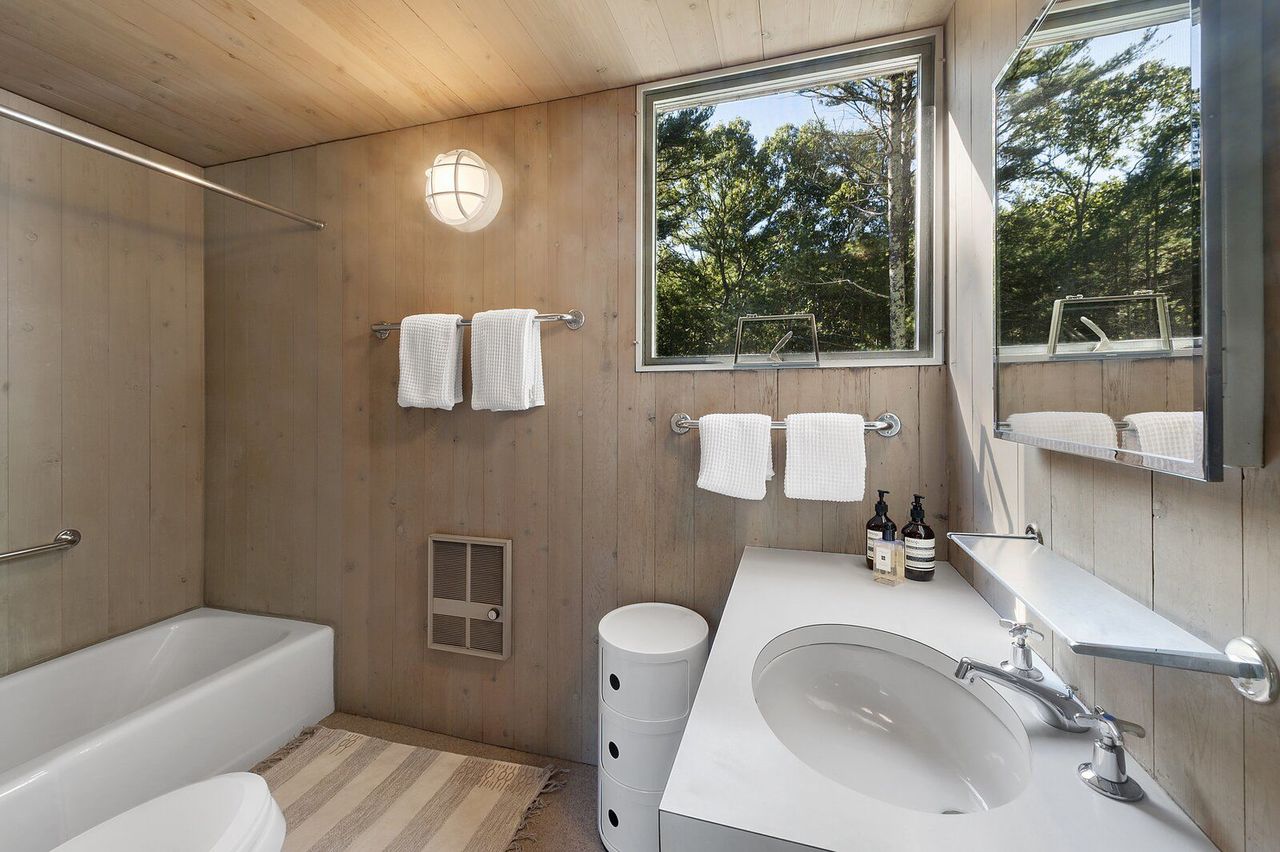 Timber continues into the primary bath, which features a large soaking tub and elevated views.

The curvaceous part of the home houses the kitchen, which is fitted with new stainless-steel appliances, and there are also three bathrooms with upgraded fixtures and finishes. Despite these modern updates, the home stays true to Gwathmey’s original design, as a previous owner consulted with the architect while renovating the property. 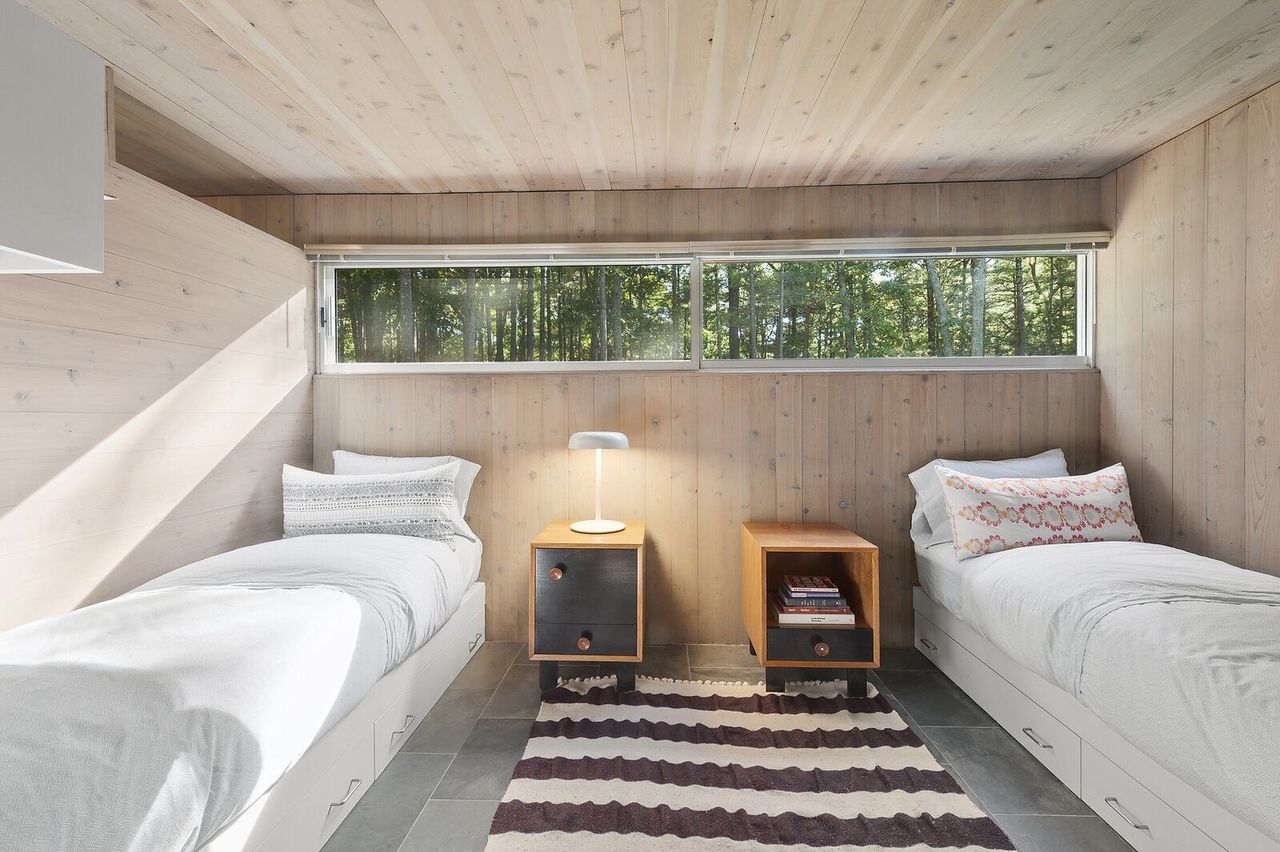 A clerestory window allows natural light to pour inside the home’s secondary bedroom. 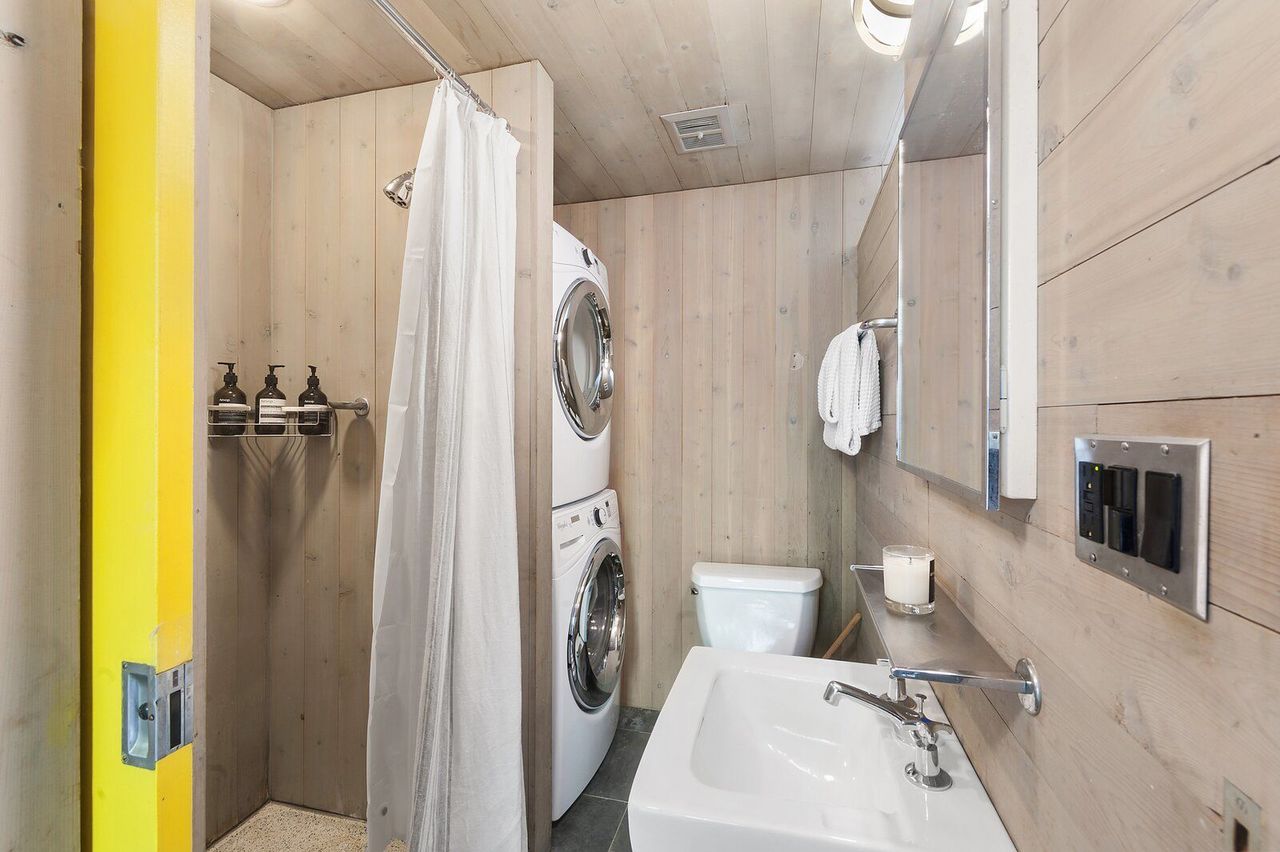 A vibrant yellow pocket door adds a playful splash of color in the bathroom/laundry area on the lower level.

A heated pool awaits in the backyard, in addition to a revamped Airstream camper which currently acts as a small guesthouse. An original storage shed is also included. "What Gwathmey created with the Sedacca House has become a piece of architectural history, lauded for its innovative use of materials and geometric forms," says listing agent Michael Schultz. "With the home now on the market, this is a once-in-a-lifetime opportunity for any aficionado of good design to make this storied residence their own." Scroll ahead to see more. 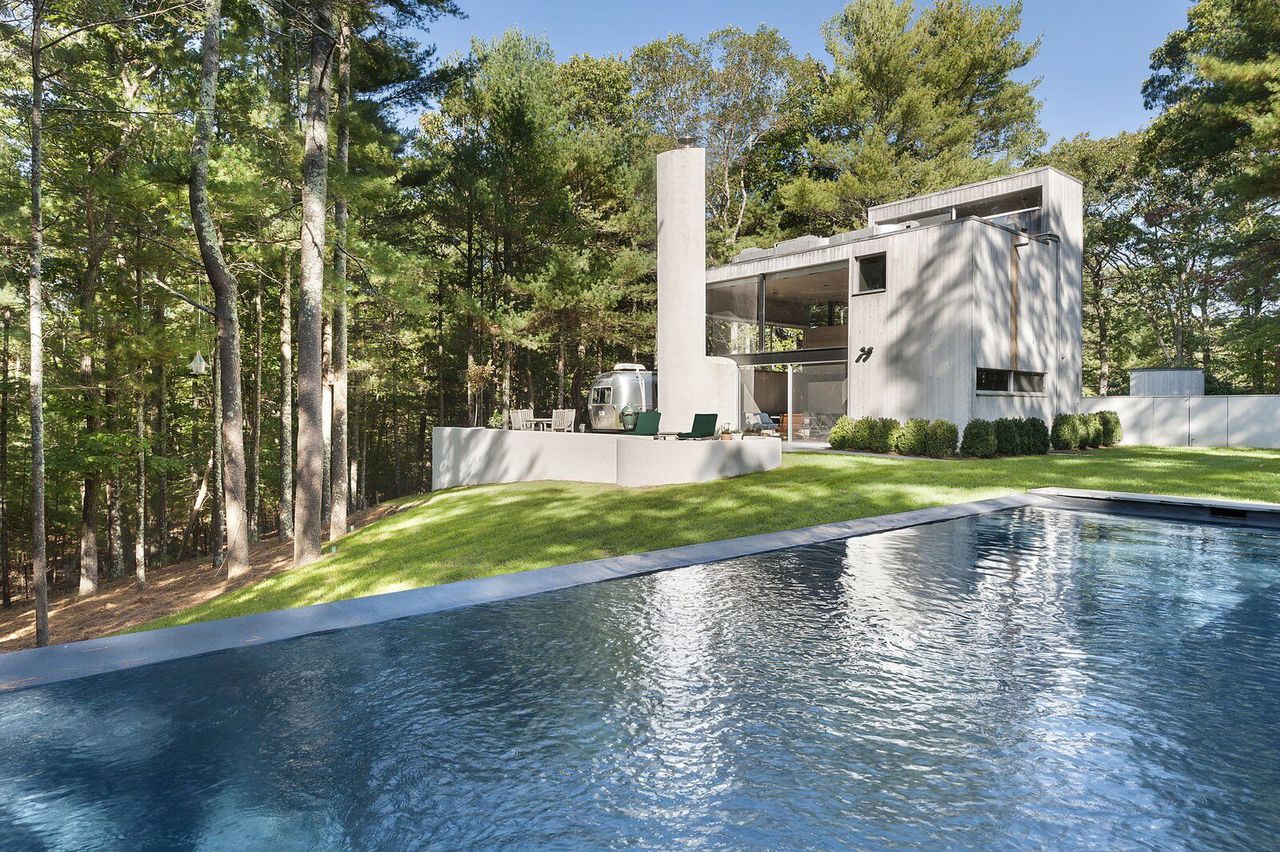 A view from the large pool in the backyard highlights the home’s oversized white chimney, which soars past the cubic volume. 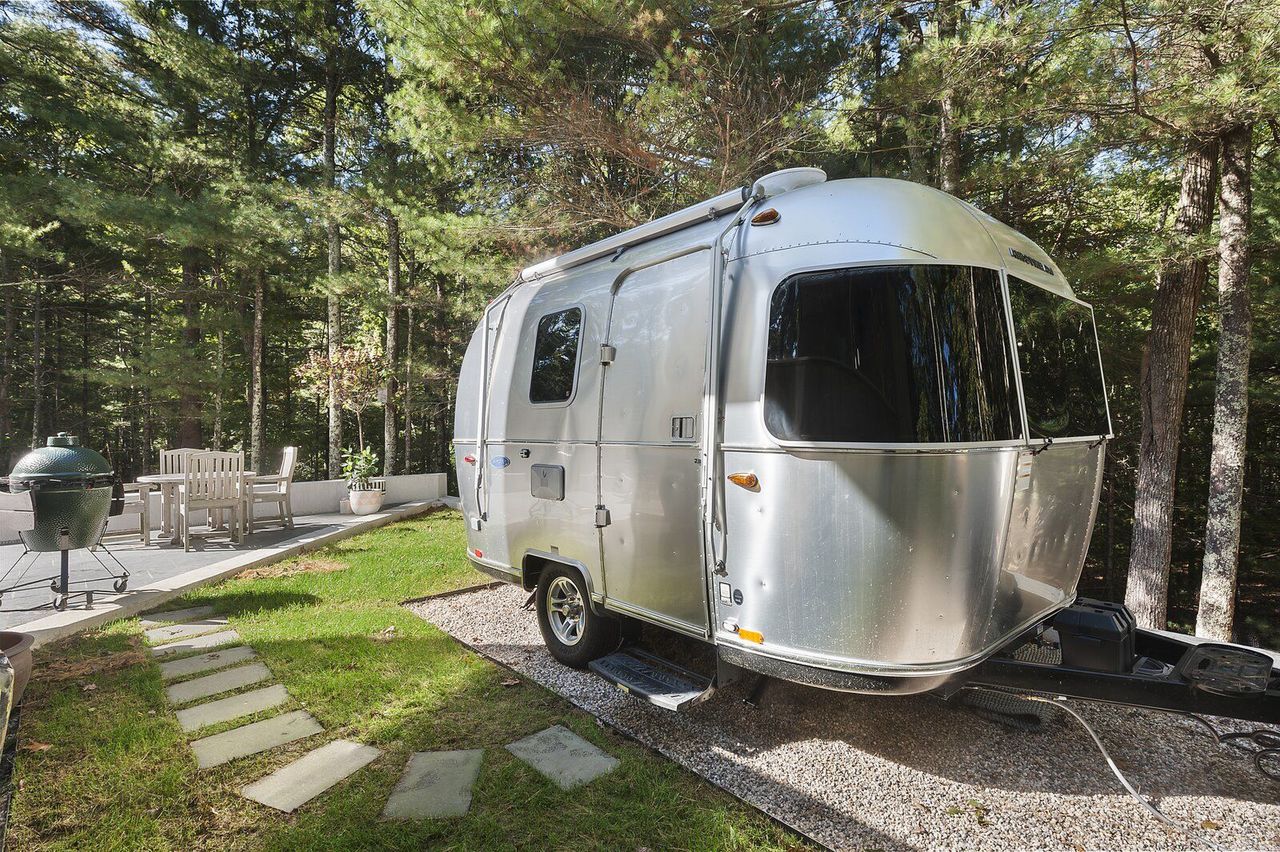 A tiny Airstream rests near the entertaining terrace, encompassed by woodlands. 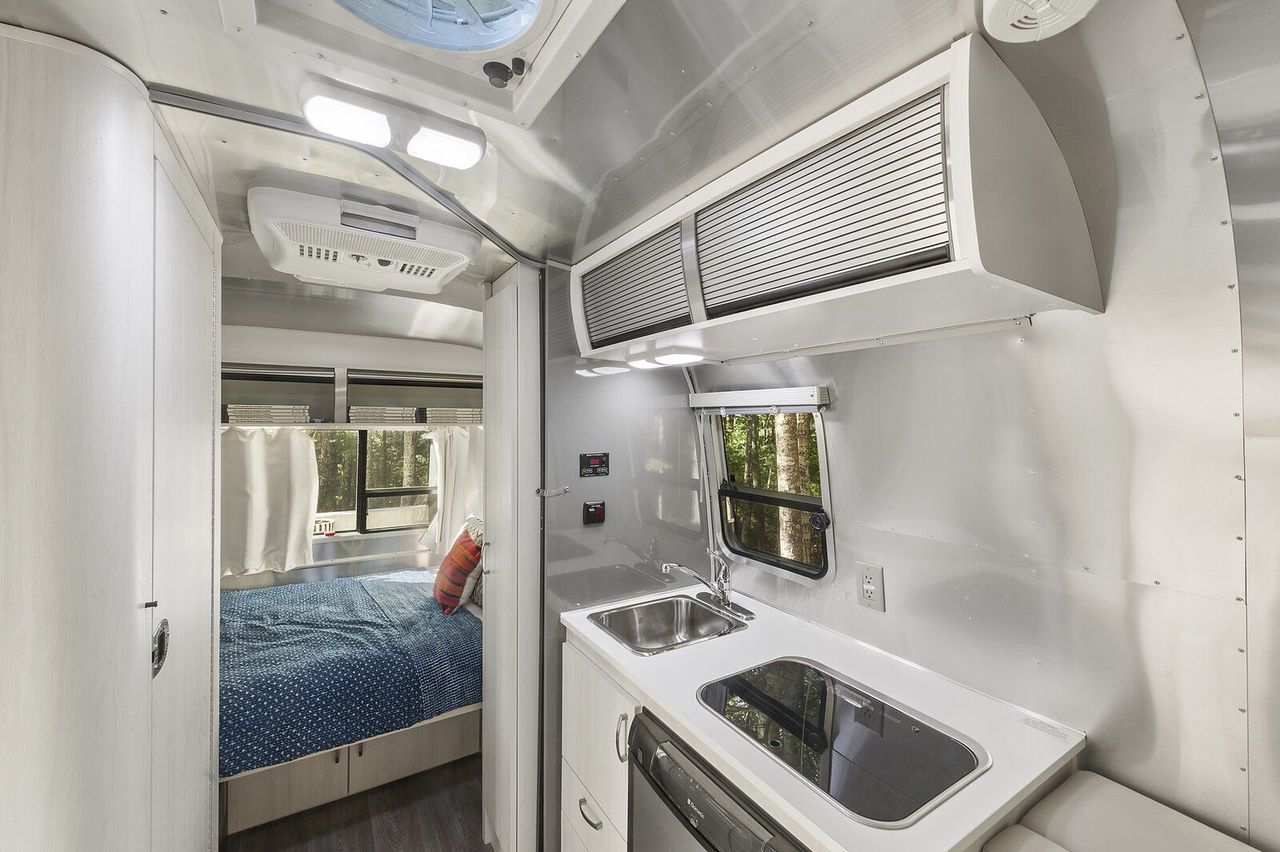 Fitted with a bedroom, bath, and kitchenette, the Airstream serves as a detached guesthouse.