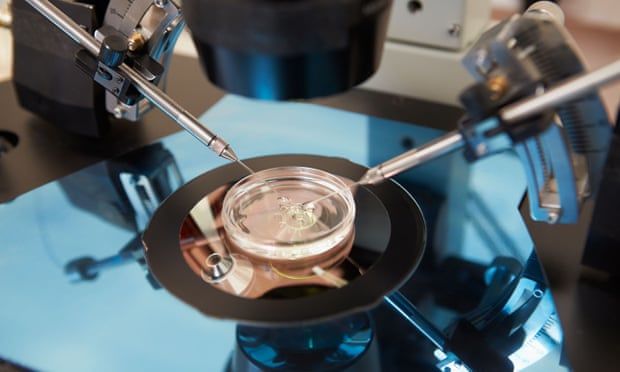 ‘A giant step’: charities welcome plan to widen access to IVF on NHS

Under current rules, heterosexual couples can access NHS-funded fertility treatments once they demonstrate that they have been trying to conceive naturally for a period of time.

However, single women and female same-sex couples are required to pay for artificial insemination privately, which can cost thousands of pounds, to prove their fertility status before they would be eligible for NHS-funded fertility treatments.

The change in rules, part of the women’s health strategy published on Wednesday, will mean that female same-sex couples and single women will no longer need to privately fund rounds of artificial insemination before being eligible for NHS fertility treatments.

A 2021 investigation by BPAS found that 76% of clinical commissioning groups (CCGs) required same-sex female couples to self-fund a minimum of three cycles of artificial insemination, which can cost up to £1,600 a cycle.

NHS treatment for female same-sex couples will now start with six cycles of artificial insemination before going on to IVF. There will also be a drive to end the “postcode lottery” in access to IVF treatment for same-sex and heterosexual couples: currently some NHS areas offer one cycle and others three, and some base eligibility for treatment on criteria such as whether a person has a child from a previous relationship.

“Fertility services are crucial in supporting the development of different family structures. However, our research has found that female same-sex couples and single women are disproportionately impacted by policies which require that they self-finance costly, and less effective, artificial insemination, in some cases for at least two years, before becoming eligible for funded IVF. These restrictions amount to a tax on LGBT+ families, and the impact can be truly devastating.”

She added: “We will be examining the policies in detail when published, and we will continue to campaign for fair and equal access for all fertility patients, including single women.”

The announcement was also welcomed by Stonewall. The charity’s chief executive, Nancy Kelley, said: “We are delighted that the UK government has listened to our call for fair and equal access to IVF treatment.

“For years, lesbians, bi women and trans people have been forced to pay up to £25,000 of private healthcare before they can access IVF on the NHS, or face giving up their dream of becoming parents.

“This is a giant step towards a world where LGBTQ+ people have the same opportunity as everyone else to build a loving, thriving family of their own.”

On Wednesday, the Department of Health and Social Care published its first ever women’s health strategy, in order to address the gender health gap. The strategy also aims to improve specialist endometriosis services, and to increase and expand breast cancer screening services.
Add Comment