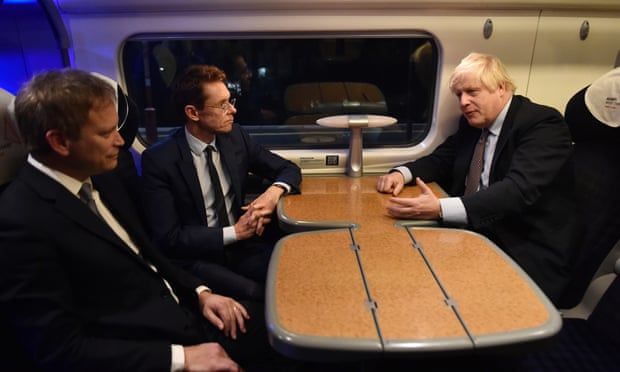 ‘A betrayal of the north’: Tory MPs frustrated at downgraded rail plan

Senior Conservative MPs, regional leaders and industry figures have accused ministers of betraying the north with a delayed and downgraded £96bn rail plan.

Ministers insisted that money-saving changes – including axing the eastern leg of HS2 and omitting a promised high-speed line across northern England – would bring faster train journeys to more communities up to 10 years earlier than planned.

But experts poured doubt on the idea of rapid progress, warning of delays and disruption for commuters after longstanding plans were ripped up. Boris Johnson was accused of reneging on commitments to level up.

The Integrated Rail Plan, published on Thursday, set out a scaling back of the Northern Powerhouse Rail (NPR) project and the axing of the planned east Midlands to Leeds high-speed line, with HS2 trains instead running on existing upgraded routes.

Announcing the changes in the Commons, the transport secretary, Grant Shapps, said the Oakervee review of the HS2 rail line and a subsequent National Infrastructure Commission report had shown a rethink was needed and that “strengthening regional rail would be most economically beneficial”. Investment in local services, including a new West Yorkshire mass transit system around Leeds, would “fire up economies” in the shorter term, Shapps said.

But rail bosses have previously warned that axing HS2 lines for upgrades would mean decades of disruption for passengers, while engineers said it was impossible to deliver more capacity and faster journeys, as Shapps had promised, without segregating high-speed trains.

As recently as last month, Johnson used his party conference speech to pledge that the government would build NPR, a commitment he made on becoming prime minister in 2019. However, the core route that northern leaders hoped for, a new high-speed line from Manchester to Leeds via Bradford, will not be built.

Tory MPs were among furious critics in the Commons on Thursday. Huw Merriman, who chairs the Commons transport select committee, suggested Johnson was “selling perpetual sunlight and then leaving it to others to explain the arrival of moonlight”.

Keighley’s Robbie Moore, one of the 2019 intake of red wall Tories, said he was bitterly disappointed that his region had been “left completely shortchanged”, telling ministers: “We need to do much, much more.”

Kevin Hollinrake, MP for Thirsk and Malton in North Yorkshire, said a new station in Bradford would have given the city “a King’s Cross-style regeneration opportunity [but instead] the economic price will be paid for generations”.

Sir Edward Leigh, MP for Gainsborough, said the north-east had “heard these promises again and again” to improve rail lines. While HS2 was a white elephant, it was now “a white elephant missing a leg”, he added. Philip Davies, MP for Shipley, called the U-turn a “massively missed opportunity”.

Regional Tory leaders expressed similar frustration. Martyn Cox, leader of Bolton council, signed a letter to Johnson organised by the West Yorkshire mayor, Tracy Brabin, that said the scaling back of NPR was “contrary to your ambition to ‘level-up’ the north” and “runs the risk of holding back our regional economies and compromising our plans to cut carbon emissions”. Ben Houchen, the Tees Valley mayor, said without the eastern leg of HS2, the whole project was now “a waste of money and should be scrapped”.

Labour said the plan had “completely sold out” the north while Andrew Adonis, the former transport secretary who launched HS2 project in 2009, said it was “a betrayal of the north” and warned that the “economic geography of England may be seriously deformed” with high-speed lines only in the west of the country.

Treasury sources denied Rishi Sunak had been expected to join the prime minister for the launch of the Integrated Rail Plan on Thursday. Challenged about whether the chancellor had ripped up the original plan to save cash, they pointed to the near-£100bn price tag for the new scheme and expressed surprise at how badly the announcement had been received.

The HS2 high-speed rail network will run to Manchester, it was confirmed, but the eastern leg will end at an existing east Midlands station rather than going from Birmingham to Leeds. A further stretch will be built west and east of Manchester from Warrington to Marsden but the TransPennine route at the heart of the proposed NPR scheme will rely on upgrades and electrification rather than a new line.

About £42bn of the £96bn cost has already been committed to build the first phases of HS2 from London to Birmingham and Crewe. Government sources said the Treasury had “shredded” a far more ambitious plan to save money, with the full proposed HS2 and NPR network costed at up to £185bn.

A Tory insider admitted that “on the surface, it looks like a betrayal” but said Johnson was looking for “quick wins” and the new route through Bradford had been rejected on cost and feasibility grounds.

Another government source said critical MPs were pursuing “mad, gold-plated Bentley ideas”. They said ministers “didn’t lie [but] should have made clearer earlier” that there were different options and a line via Bradford was “only a possibility”.

Nonetheless, Transport for the North called the plan woefully inadequate, with less than half the investment required, replacing their “evidence-led plan” with “a bit here and a bit there of minor upgrades”.

The CBI, representing 190,000 businesses, said the “goalposts have moved at the 11th hour” and “areas most sorely in need of development will lose out as a result of the scaled back plans”.

Experts warned that the case for HS2 was now weaker than ever. Leeds University professor Jillian Anable, a former Department for Transport adviser, said the London to Birmingham route’s economic benefits mainly depended on the second phase: “We are left with the worst of all worlds.”

Meanwhile, anti-HS2 groups welcomed the package, and environmental activists vowed to redouble protests against HS2. Dan Hooper, 48, also known as Swampy, said: “HS2 is a massive land grab and it will never be carbon neutral.” Dr Larch Maxey, another of the activists involved in the Euston tunnel protest, said: “The public have consistently opposed this scheme, because of its cost, the loss of homes and businesses and the CO2 emissions … Today, the arguments against HS2 have got much stronger.”