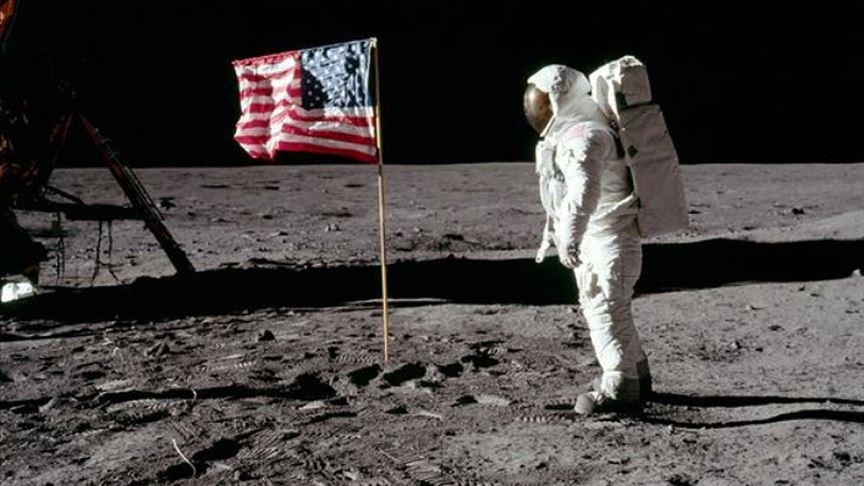 53rd anniversary of US putting 1st man on the moon

For all eternity, the US will lay claim to being the first country to put a man on the moon.

Fifty-three years ago, on July 20, 1969, NASA spacecraft Apollo 11 landed on the moon with astronauts Neil Armstrong, Buzz Aldrin, and Michael Collins aboard.

All three became iconic figures around the world, with Armstrong becoming the first human to set foot on the moon's surface.

"That's one small step for man, one giant leap for mankind," he exclaimed on that glorious day.

"Obviously, firsts are usually the ones we remember the most, and Neil’s accomplishment certainly ranks among the most notable firsts of all time," said Brian Odom, the US space agency’s acting chief historian. "His calm, cool demeanor during the mission also became legendary and made him the subject of many documentaries, films, and stories."

"The reaction to Apollo 11 was tremendous both in the US and internationally," Odom told Anadolu Agency. "Once the astronauts returned home, they became instant celebrities, as the landing was understood to be one of the greatest of humanity's accomplishments."

The triumph of that historic day was the result of the US battling the Soviet Union during the 20th century in what became known as the Space Race.

"In May 1961, President John F. Kennedy committed the US to the Moon program. The decision followed a series of notable firsts for the Soviets, including Sputnik in 1957 and Yuri Gagarin’s orbital flight in April 1961," Odom explained.

"At the time, the Cold War magnified these defeats, as communism and democracy were locked in what appeared to many to be an existential battle around the world."

This competition between the two global giants propelled both countries to press forward with the Space Race with the goal of letting the world know which nation was number one. That meant countless resources being poured into NASA's space program.

"Kennedy believed technological achievements were important to the Cold War race but also that the investment in the Apollo program would have implications back home in terms of national capabilities in research and development," said Odom. "Kennedy believed this investment would also have implications on the American economy and society. The success of Apollo 11 in 1969 was the culmination of that process."

That first mission to the moon intensified America's focus on the space program and immediately impacted the scientific community worldwide.

"More missions returned to the lunar surface, expanding science and exploration," Odom explained. "These accomplishments allowed the US and international partners to build upon that success by returning to low Earth orbit to understand the microgravity environment, planetary science, astrophysics, and Earth science."

Less than three years after the US put the first person on the moon, President Richard Nixon declared in 1972 that NASA would develop a space transportation system featuring a vehicle capable of shuttling "repeatedly from Earth to orbit and back."

Then, on April 12, 1981, another nine years later, the first space shuttle, Columbia, blasted off, beginning a 30-year run of 135 shuttle missions, which carried more than 350 crew members into outer space, traveling more than 804 million kilometers (500 million miles) during that period.

"Following Apollo, NASA dedicated its human spaceflight efforts to the space shuttle," said Odom, praising its ability to “allow us to learn valuable lessons in low-Earth orbit and to live and work in space."

Exploring the vast unknowns of space did not end there. From the space shuttle program to the Hubble Space Telescope to the Mars Rover, the first moon landing has been an important catalyst in America's commitment to space exploration more than a half-century later.

Webb Telescope, return to the Moon, and manned Mars mission

"The moon landing continues to inspire NASA and its workforce, commercial and international partners to dream big," emphasized Odom. "One important example is the recent success of the James Webb Space Telescope. This telescope is the largest and most complex space science observatory ever built to transform our view of the universe and deliver world-class science."

"Like Apollo before it, Webb is one of the great engineering feats of humanity," Odom stressed. "The recently revealed first images brought us together to wonder at our shared cosmic origins."

Over the decades since the first moon landing, many space enthusiasts have wondered when the US will send another crew of astronauts to the moon.

"NASA is going back to the Moon and beyond with the Artemis Program," said Odom. "With Artemis, NASA will land the first woman and first person of color on the Moon, using innovative technologies to explore more of the lunar surface than ever before for the benefit of all."

NASA continues to test the Artemis human landing system and its next-generation spacesuits, with a target date for that first mission sometime in 2026.

"We will collaborate with commercial and international partners and establish the first long-term presence on the Moon," explained Odom. "Then, we will use what we learn on and around the Moon to take the next giant leap: sending the first astronauts to Mars."

As is evidenced by the amount of space travel and technological breakthroughs over the past 53 years, landing the first human on the moon will continue to motivate space exploration and allow scientists to believe dreams can come true.

"I think it really means there is nothing humanity can’t accomplish if we work together across both human space exploration and scientific discovery," said Odom. "People will never look at the sky the same way again."

Oh ya 28 days ago
The US needs to let this BS story die out
Anyone with 2 working brain cells knows that Stanley Kubrick made that movie for NASA. if you disagree please explain how they get through the Van Allan radiation belt in something equal to a pop can when your x-ray tec hides behing a lead apron and a wall for your 1/30 of a secong xray.
View all comments (1)Add comment