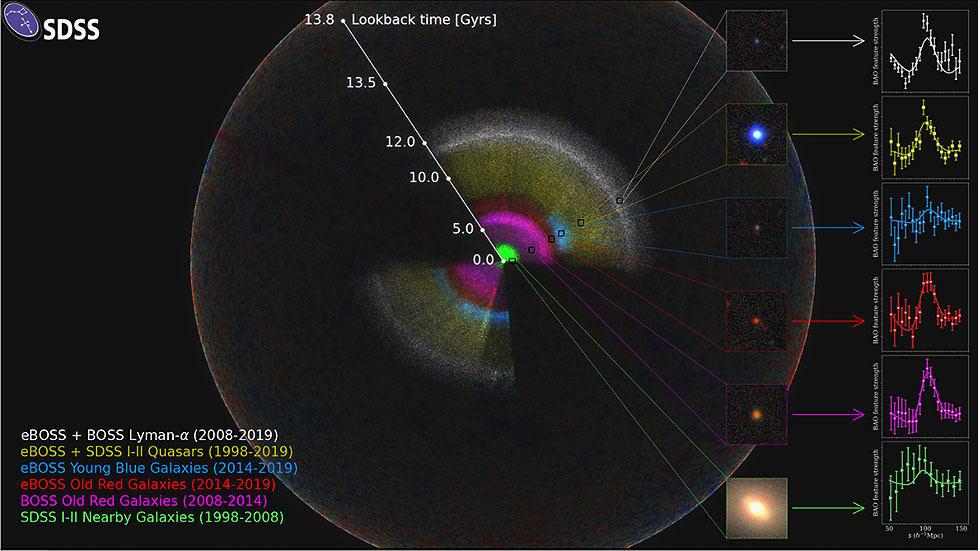 The Sloan Digital Sky Survey (SDSS) has published a comprehensive 3D map of the universe, filling in many previous unknowns. It represents “some of the most substantial advances in cosmology in the last decade,” one expert says.
The map, the brainchild of two decades of analysis, provides new measurements of how the universe has expanded over the past 11 billion years.

The 3D rendering helps explain the theory that the universe is ever-expanding at an accelerating pace, due to a ‘cosmological constant,’ sometimes referred to as ‘dark energy’. Dark energy is an unknown form of energy that affects the universe on the largest scales.

“We know both the ancient history of the universe and its recent expansion history fairly well, but there’s a troublesome gap in the middle 11 billion years,” said cosmologist Kyle Dawson of the University of Utah, who led the SDSS team.

Dawson added that the creation of the map represents “some of the most substantial advances in cosmology in the last decade.”

SDSS-IV was launched in 2012 with the intention of capturing more precise cosmological measurements of unknown periods in the universe’s history. Team members worked with those involved in the extended Baryon Oscillation Spectroscopic Survey (eBOSS) – a collaboration of more than 100 astrophysicists – to create the 3D rendering, which included the histories of two million galaxies and quasars. Quasars are the brightest and most distant objects in the known universe, in which a supermassive black hole, with a mass ranging from millions to billions of times the mass of the sun, is surrounded by a gas.

From this map, researchers can then measure patterns that help define key parameters to explain the makeup of the universe to an accuracy of better than one percent.

“These studies allow us to connect all these measurements into a complete story of the expansion of the universe,” Professor Will Percival, of the University of Waterloo, and eBOSS’s survey scientist said in a statement.
Add Comment