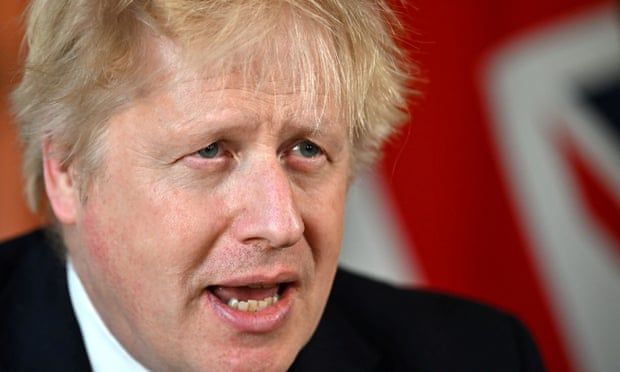 Boris Johnson faced a renewed threat to his position over the partygate scandal after the police decision to fine 20 people for lockdown breaches appeared to shatter his claim that Covid rules were followed in No 10.

The move by the Metropolitan police was seen as clearcut confirmation of lawbreaking at the heart of government, yet Downing Street provoked fury and derision by refusing to accept that the fixed-penalty notices meant the rules had definitively been broken.

On a febrile day, No 10 was also forced to back down after initially saying it would not disclose if Simon Case, the cabinet secretary and civil service head, was one of those issued with a fixed-penalty notice.

With the Met making clear this was only the first tranche of referrals – and interviews with certain key figures likely to take place in the coming weeks – there is still a possibility Johnson will be among those asked to pay a fixed-penalty notice.

The threat by some Tory MPs to depose him has lessened in recent weeks amid the crisis in Ukraine, but confirmation of the first penalties on Tuesday reignited talk of a possible challenge.

Rebel Tory MPs who previously organised against Johnson said they would now renew efforts to convince colleagues that the prime minister had lied to parliament. “They’re the first proof that laws were broken, despite denials,” one said.

Another rebel said that while the number of open malcontents remained low, if Johnson was to be fined, the threat of a no-confidence vote against the prime minister could resurface: “We’re perfectly capable of returning to address this issue when it finally concludes.”

Johnson was attempting to shore up his leadership on Tuesday night with a dinner for Tory MPs, but a number declined to attend.

Ministers who attended were heckled by bereaved families of Covid victims as they arrived. Shouts of “shame on you” and “off to another party are we?” were directed at Michael Gove and Jacob Rees-Mogg as they turned up to the Park Plaza near Westminster Bridge, where a penthouse costs up to £653 a night.

In a sign of Johnson’s already diminished authority, Conservative whips U-turned on Tuesday and opted to not force Tory MPs to vote against a Labour motion seeking access to the security advice over the decision to give a peerage to Evgeny Lebedev.

The Labour motion had been expected to fail, as ministers opposed the release and wanted Tory MPs to oppose it. But they were forced to back down when a group of backbenchers threatened to rebel.

Johnson will also face a critical moment in his premiership if he is revealed to be among those who are included in subsequent tranches of fixed-penalty notices. Senior Tory MPs such as the former attorney general, Jeremy Wright, have said he should face “resignation or removal from office” if he is found to have knowingly attended rule-breaking parties. And former lord chancellor Robert Buckland said on Tuesday: “I think any head of government who has been found to have infringed the law has got some explaining to do.”

Those who moved against Johnson in February do not yet believe there is enough pressure on him to instigate a fresh challenge to his leadership, and the fact that none of those fined will be named is also seen as likely to limit the scale of the damage.

But some MPs said they were reserving their judgment until the full report on the parties by senior civil servant Sue Gray is released, which will not happen until the police investigation is over.

Others said Johnson being fined or not would be the crucial factor. “It’s really tricky for him,” said one backbencher who has not previously sought the prime minister’s departure. “The case remains that we are on very shaky ground if our leaders break the rules that they make.”

However, a former cabinet minister added: “The rebels are often people who don’t like him for other reasons. They have been let down by him personally. It’s venal, but it’s true. And there is a lot of wishful thinking. So I think he’s out of the woods for the moment and the real question is when we return to normal politics [after Ukraine] because the moment we do, the risk goes up again. The conventional wisdom is that if he survives the year, then he survives until the election.”

As Tory MPs weighed Johnson’s future, Labour’s deputy leader, Angela Rayner, renewed calls for Johnson to resign: “The buck stops with the prime minister, who spent months lying to the British public, which is why he has got to go.”

No 10 said on Tuesday that it did not know the identities of the 20 people set to be given fixed-penalty notices, and that they would not need to inform superiors unless it formed part of a security vetting procedure. They could still face disciplinary action as part of Gray’s inquiry.

The only people who will be named if fined are Johnson, Rishi Sunak, the chancellor, who is also among those who filled in a police questionnaire about the alleged gatherings, and Case.

Under pressure for a lack of transparency, Downing Street changed tack over naming Case, saying this should happen “given his unique position”.

Ed Davey, the Liberal Democrat leader, said anonymity was not tenable if senior staff were fined: “It must be the case that any decision-maker and senior official who is handed a fixed-penalty notice for attending a party must have their name published.”

The Met has said those who are issued notices will not be named, based on the professional practice guidance for fixed-penalty notices. The force said there was a “significant amount of investigative material that remains to be assessed” and that further penalties would be issued if the evidence threshold was met.

The police have also said they will not set out which penalties were issued for which alleged gatherings to avoid inadvertent identification, raising the possibility that the public might never learn if events attended by Johnson were in breach of the law.

On Tuesday night the College of Policing said that police forces must apply proportionality when considering what information to keep from the public. A spokesperson said: “National guidance exists to promote consistently fair and proportionate treatment for those involved in investigations across all forces in England and Wales.

“The guidance is designed to aid operationally independent decisions made by forces. The police can consider the details of any investigation to make decisions in the best interests of the public.”

Police are investigating 12 events in 2020 and 2021, six of which Johnson is said to have attended.

Johnson was not expected to comment on the matter until the end of the police investigation, and the subsequent publication of the second part of the report by Gray, the spokesperson added.

Those given fixed-penalty notices will receive a letter from the criminal records office, Acro, giving 28 days to pay the penalty. It is thought at this stage that the Met is probably referring people for penalties of £100 or £200.