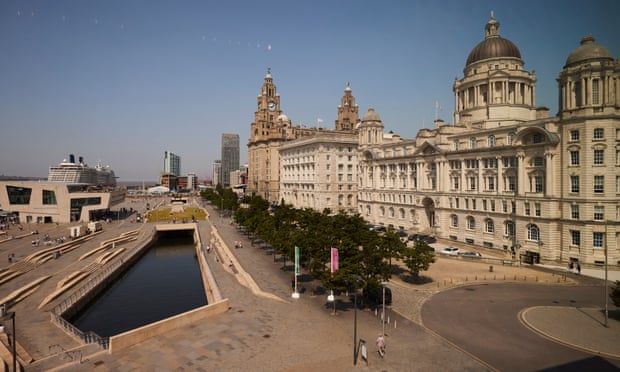 Liverpool has been stripped of its coveted world heritage status after Unesco blamed years of development for an “irreversible loss” to the historic value of its Victorian docks.

The UN’s heritage body concluded at a meeting in China on Wednesday that the “outstanding universal value” of Liverpool’s waterfront had been destroyed by new buildings, including Everton football club’s new £500m stadium.

The decision is a humiliating blow for the city and gives Liverpool the ignominious distinction of being only the third place to lose the status in nearly 50 years. The other delisted sites were Oman’s Arabian Oryx Sanctuary in 2007 and the Dresden Elbe valley in Germany in 2009.

Liverpool has enjoyed world heritage status since 2004 – placing it alongside the Taj Mahal and Great Wall of China – as recognition for its role as a major trading power during the British empire and the architectural beauty of its waterfront. 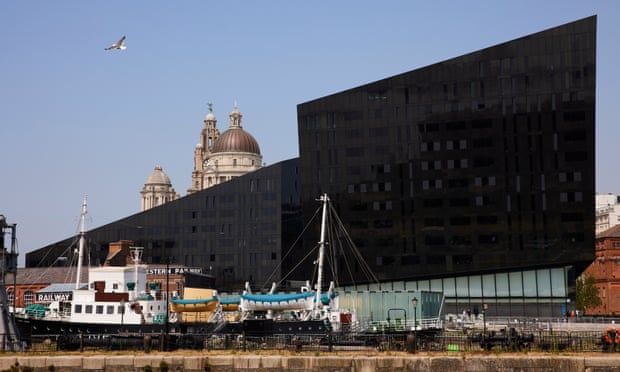 The waterfront area in Liverpool.

The label gives historic sites access to UN conservation funding and protection under the Geneva conventions in the event of war, as well as featuring in tourist guidebooks across the world.

The threat of being delisted has hung over Liverpool since 2012 as Unesco warned that development had significantly changed the city’s skyline and was destroying the heritage value of its waterfront.

The decision was announced by Tian Xuejun, the chair of the Unesco world heritage committee, at a virtual conference hosted in China on Wednesday.

The UN agency said development such as Liverpool Waters, a £5.5bn project by Peel Group to transform previously disused land, had led to a “serious deterioration and irreversible loss” to the area’s outstanding universal value along with “significant loss to its authenticity and integrity”.

It said that as a result of these projects the waterfront had “deteriorated to the extent that it has lost characteristics” that led to its inclusion on the world heritage list in 2004.

The proposal to build Everton’s new riverside football stadium at Bramley-Moore dock would “add to the ascertained threat of further deterioration and loss” of its historic value. 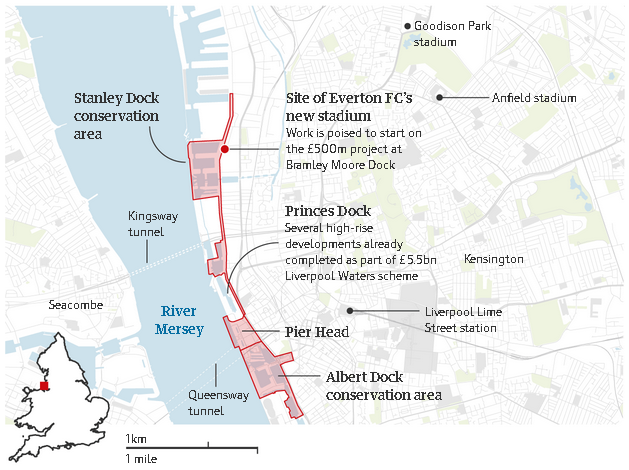 The decision was met with dismay by Liverpool city leaders. Joanne Anderson, the city mayor, said she was “hugely disappointed and concerned” and that the council would consider lodging an appeal.

She said it had been a decade since Unesco last visited the city “to see it with their own eyes” and it was “incomprehensible” that Unesco would rather see Bramley-Moore dock as a “derelict wasteland” than as a gleaming new football stadium that would attract hundreds of thousands of visitors.

She added: “Our world heritage site has never been in better condition having benefited from hundreds of millions of pounds of investment across dozens of listed buildings and the public realm.”

Steve Rotheram, the metro mayor of the Liverpool city region, said it was a “retrograde step that does not reflect the reality of what is happening on the ground” and was “a decision taken on the other side of the world by people who do not appear to understand the renaissance that has taken place in recent years”.

He said places such as Liverpool should not be left with a choice between maintaining heritage status or regeneration and bringing in jobs.

A short walk from the Baltic Triangle, where artists’ studios sit alongside independent bars and cafes, Jayne Casey said the announcement felt like a depressing landmark in the city’s otherwise proud cultural history.

“We’ve been aware for a long time that developers have got a lot of sway in the city. The champagne will be flowing tonight for them because every little bit of land will now be built on,” said Casey, who was co-creative director of Liverpool’s capital of culture in 2008 and is regarded as one of the city’s most influential cultural figures.

Casey said those pushing Liverpool to bid for world heritage status had been “laughed out of every building” in the city 20 years ago due to the dereliction and other social issues that had blighted the area for decades.

The mantle bestowed international prestige on Liverpool, she said, but it had also accelerated a development boom that suffocated artistic life in the city. “Liverpool’s shifted from being a cultural city to one that’s just life everywhere else,” she said.

Heritage groups described the move as a moment of shame for the UK and accused the government of not doing enough to protect its historic sites or intervene on Liverpool’s behalf when Unesco threatened to delist it.

Henrietta Billings, the director of Save Britain’s Heritage, said being stripped of world heritage status was a “national embarrassment” and that Liverpool had been failed by the government’s “devolve and forget” approach to protecting cultural assets.