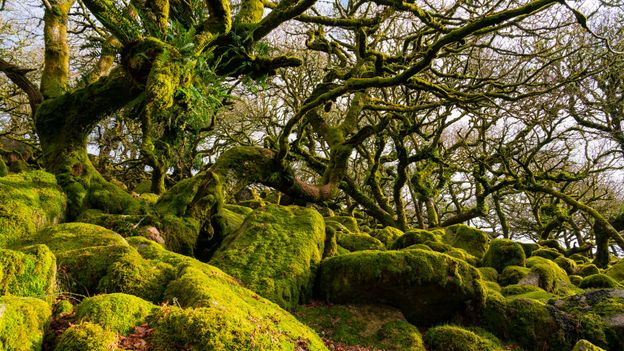 The UK is home to a dwindling swathe of temperate rainforest, and these biodiverse, beautiful habitats are some of the most endangered areas of rainforest in the world.

If you were asked where the world's most endangered rainforest is, then it's unlikely your first answer would be the British Isles. But the United Kingdom is home to dwindling patches of temperate rainforest, a rare and ancient ecosystem that is found in isolated fragments along the country's western coastlines.

Covered in an emerald sheen of evergreen flora, vast swathes of temperate rainforest once grew all along the United Kingdom's western shores. Atlantic storms, heavy rainfall and high humidity levels provide a moisture-rich environment where this unique habitat can thrive, but centuries of deforestation mean that the Woodland Trust – the UK's largest woodland conservation charity – now describes this globally rare ecosystem as "more threatened than tropical rainforest".

In rainforest regions across the United Kingdom, though, conservationists are mapping, preserving and regenerating this rare habitat, while inspiring travellers, hikers and nature-lovers to visit them.

"Temperate rainforests are characterised by very wet, humid and mild climates," explained Dr Alison Smith, a scientist from conservation charity Plantlife, who is currently leading a project to protect and enhance temperate rainforests in south-west England. "They require low temperature variations throughout the year and high annual rainfall. Often, they are found in coastal and upland areas with deeply incised topography – like rivers, ravines and waterfalls – that add to the humid conditions."

Globally, the temperate rainforest biome can be found in countries as wide-ranging as Ireland, Japan, New Zealand, Canada and Chile. In the United Kingdom, the blustery western coast's undulating landscape is the perfect holdout for temperate rainforests, and many surviving fragments are found in south-west England, Wales, and the west coast of Scotland and Northern Ireland. 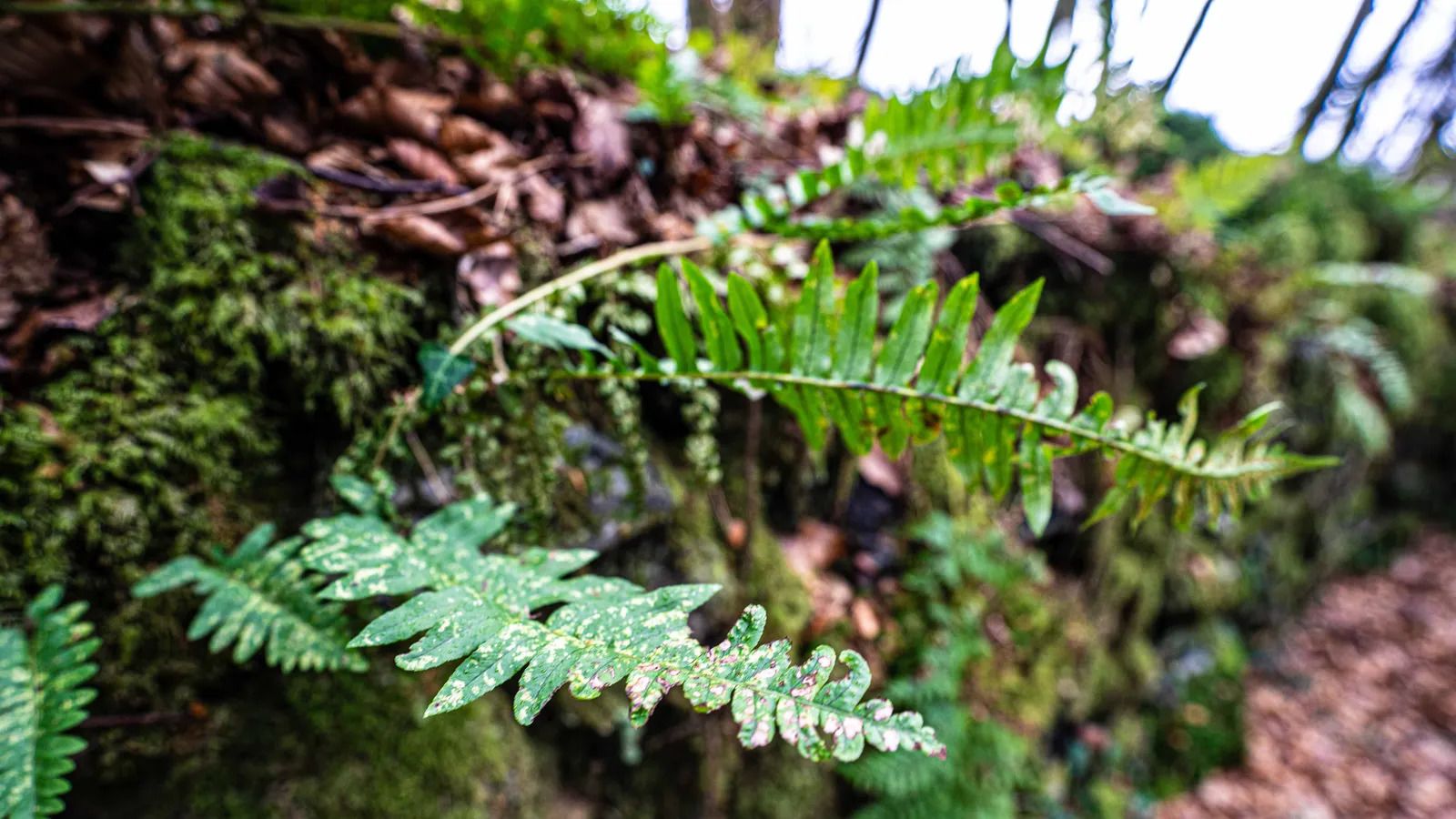 Temperate rainforests across the world are home to rich populations of rare lichens, ferns and mosses that thrive on the surface of damp, moisture-rich trees, clinging on to branches, tree trunks and even boulders throughout the woodland. In the UK, temperate rainforests are strewn with ancient oak trees, many of which are hundreds, if not thousands, of years old, while rare migrant birds – including the pied flycatcher and wood warbler – flit amongst the birch, hazel, ash and pine trees in summer, searching for insects among the damp soil and fungi.

Dr Smith says that the biodiversity of the United Kingdom's temperate rainforests "rivals the cloud forests of the Andes", and because many of the species found in the UK – including the rare lungwort lichen – are threatened or not found elsewhere, "we have an international responsibility to conserve them here".

"A visit to one of Britain's temperate rainforests is not one you'll easily forget," said environmental activist Guy Shrubsole, who founded the website Lost Rainforests of Britain in 2020 in order to track remaining rainforest locations in the UK. "They glow green with the sheer abundance of mosses, lichens and ferns growing on every surface."

He explained how much of this ancient woodland has succumbed to deforestation, competing demands for land, and, as recently as the 20th Century, government efforts to replace existing woodland areas with faster growing but non-native conifer trees. It's unclear exactly how extensive temperate rainforest coverage once was in the UK (Shrubsole said bluntly: "there was a lot more than there is now"), but the fragmented areas that do remain are isolated, often hard to reach and generally undocumented.

Realising that the United Kingdom's remaining rainforest areas were in danger of disappearing, Shrubsole decided that the first step in saving them was to map them. He began crowdsourcing temperate rainforest locations through his website, asking people to upload information and pictures of potential rainforest sites across the United Kingdom. 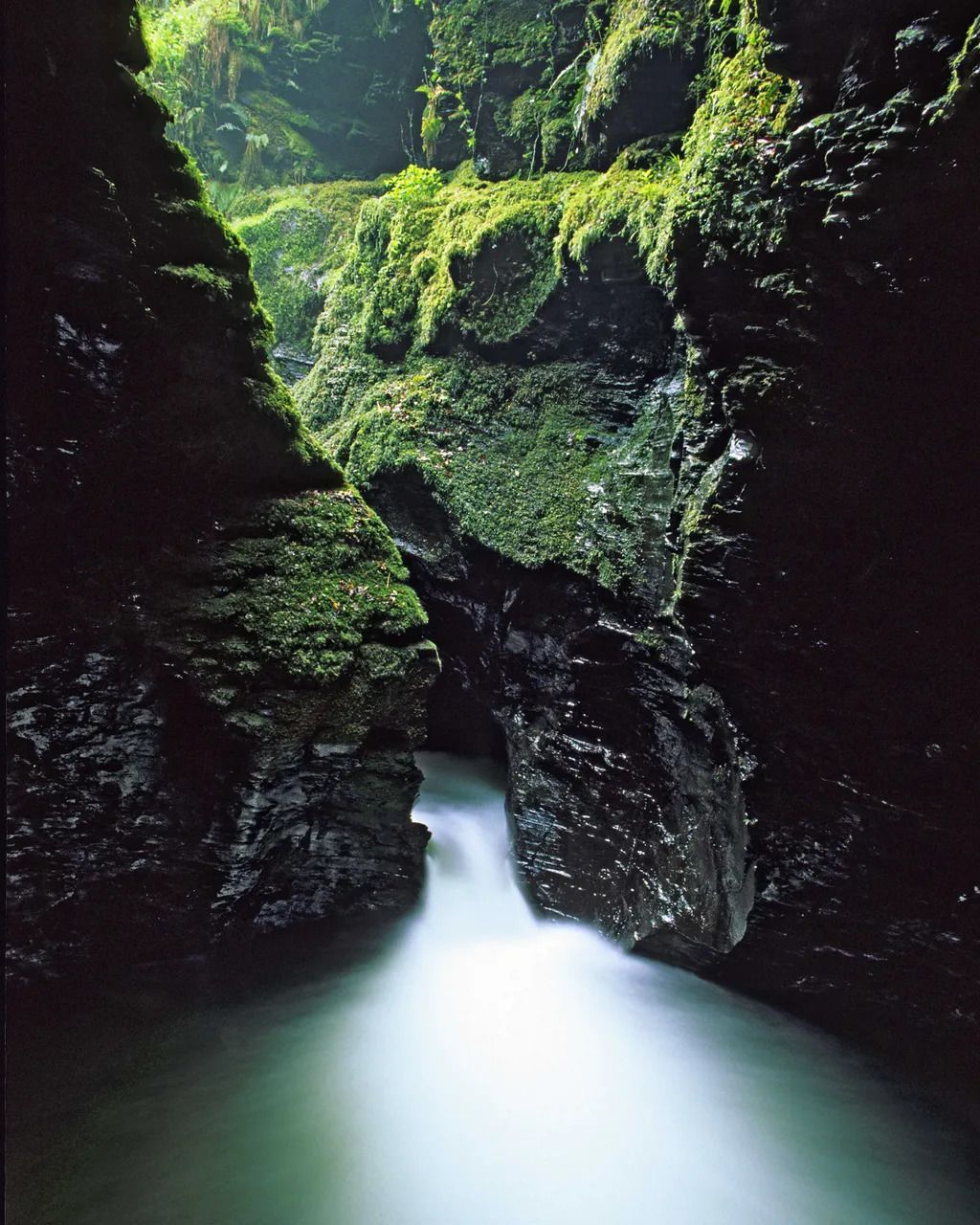 The project resonated with Brits during the pandemic, and he received thousands of submissions, which, if verified, were then uploaded to an ever-expanding public map that anyone can use to discover temperate rainforests near them. Shurbsole hopes that the crowdsourced information can now assist authorities and conservationists in their efforts to establish protected rainforest areas and effective woodland management strategies.

Many of the locations uploaded to Shurbsole's map were concentrated close to my home in Devon in south-west England, and after discovering the project I became captivated by the idea that I didn't have to fly thousands of miles across the world to the Amazon or Borneo when there was an even rarer rainforest habitat on my doorstep.

One such area is Ausewell Woods, a small woodland on the eastern edge of Dartmoor National Park. A narrow country lane, lined by low stone walls covered in green moss, led to the entrance, where I stepped out of my car and into the squelchy mud of the woodland car park. Through the early morning mist, I caught glimpses of greenery in the trees, before – rather too appropriately – it began raining.

"Epiphytes!" Shrubsole had exclaimed excitedly when I asked what to look out for on my outing. An epiphyte is a plant – such as moss, ferns and lichen – that, given wet conditions, grows on top of another plant. Their presence on trees and branches is one of the biggest indicators of a temperate rainforest environment.

In particular, Shrubsole advised me to look out for easy-to-spot polypody ferns – the name means "many footed" in Latin – and I was soon pushing my way through soaking wet ferns and clambering over lichen-covered branches as I hiked to a pile of moss-strewn boulders that sat atop a small hilltop. It was January, but due to the abundance of epiphytes, the deciduous trees in Ausewell Woods are green year-round. 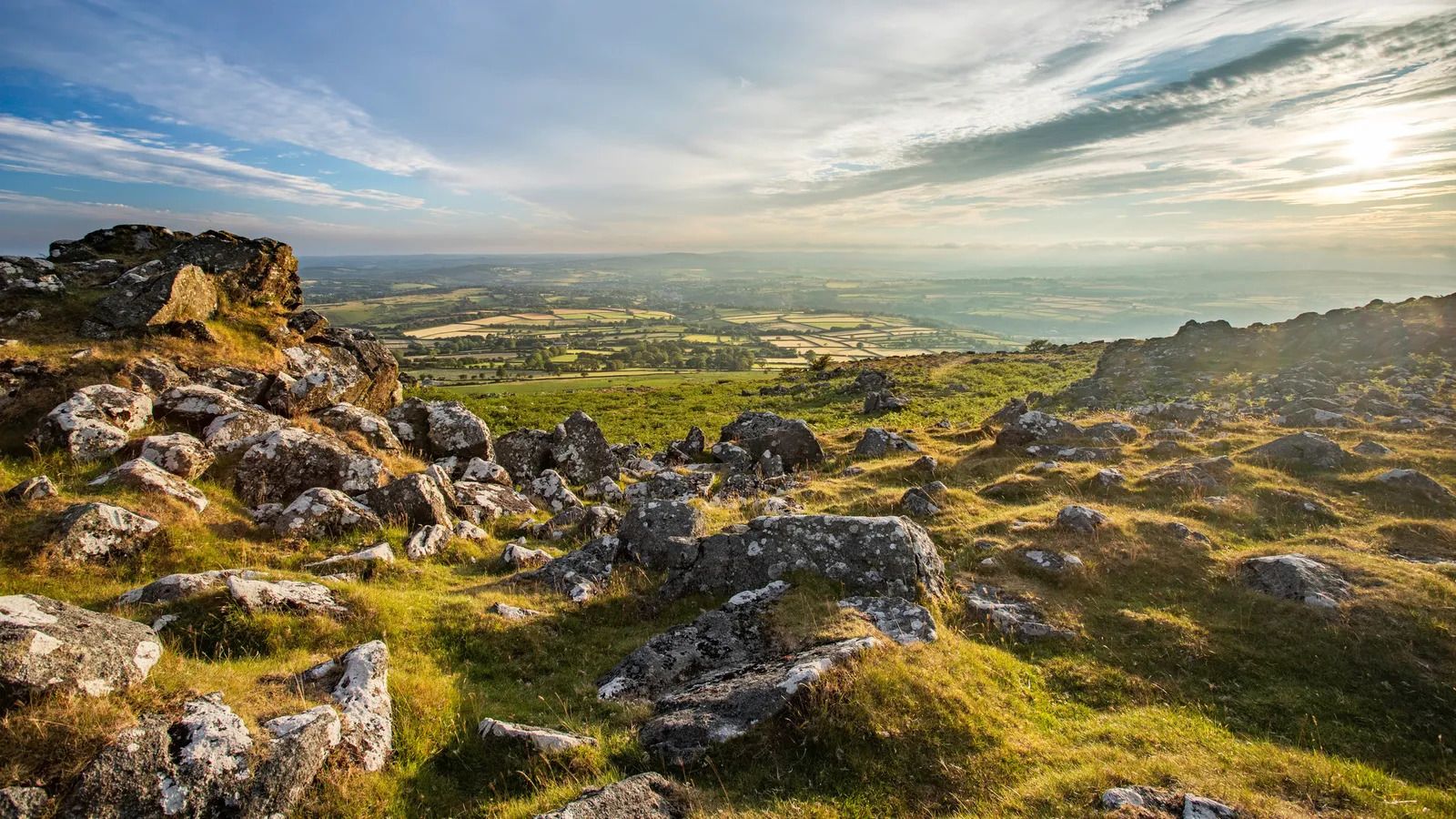 As the rain and mist obscured my view of the surrounding landscapes, it took little imagination to understand why the Woodland Trust describe Ausewell Woods as the "The Lost World". But until a concerted crowdfunding campaign raised the money to save Auswell Woods, this area of rainforest nearly became lost forever.

The Woodland Trust successfully crowdfunded £1 million from donors in order to purchase Ausewell Woods when it was put up for sale in 2019, saving the woodland from being sold off for development.

Of the 342 acres of woodland they've taken over, it's estimated that at least 160 acres were in danger of being lost due to poor land management practices, felling and the planting of tall conifer trees that blocked out light to other species.

Now, the Woodland Trust is slowly removing non-native conifers to allow light back into the woodland, while also developing long-term conservation plans to preserve and regenerate this temperate rainforest over many decades.

Ausewell Woods might have been saved, but many more areas of temperate rainforest have been lost over the centuries. From the top of the hill, I could just see through the thickening mist how Ausewell Woods descends into a valley. At the bottom of the valley lies the River Dart, and west of the river, striking tors – rock formations – line the treeless ridge.

The River Dart takes its name from an old Celtic word meaning "oak". The river would once have been lined with oak trees, a key component of temperate rainforests, while Dartmoor National Park – which is today famous for its barren landscapes, rocky tors and windswept moors – would also have been covered in woodland. "Within human memory," said Shrubsole, "recorded within our place names are echoes of a different ecosystem of the past." 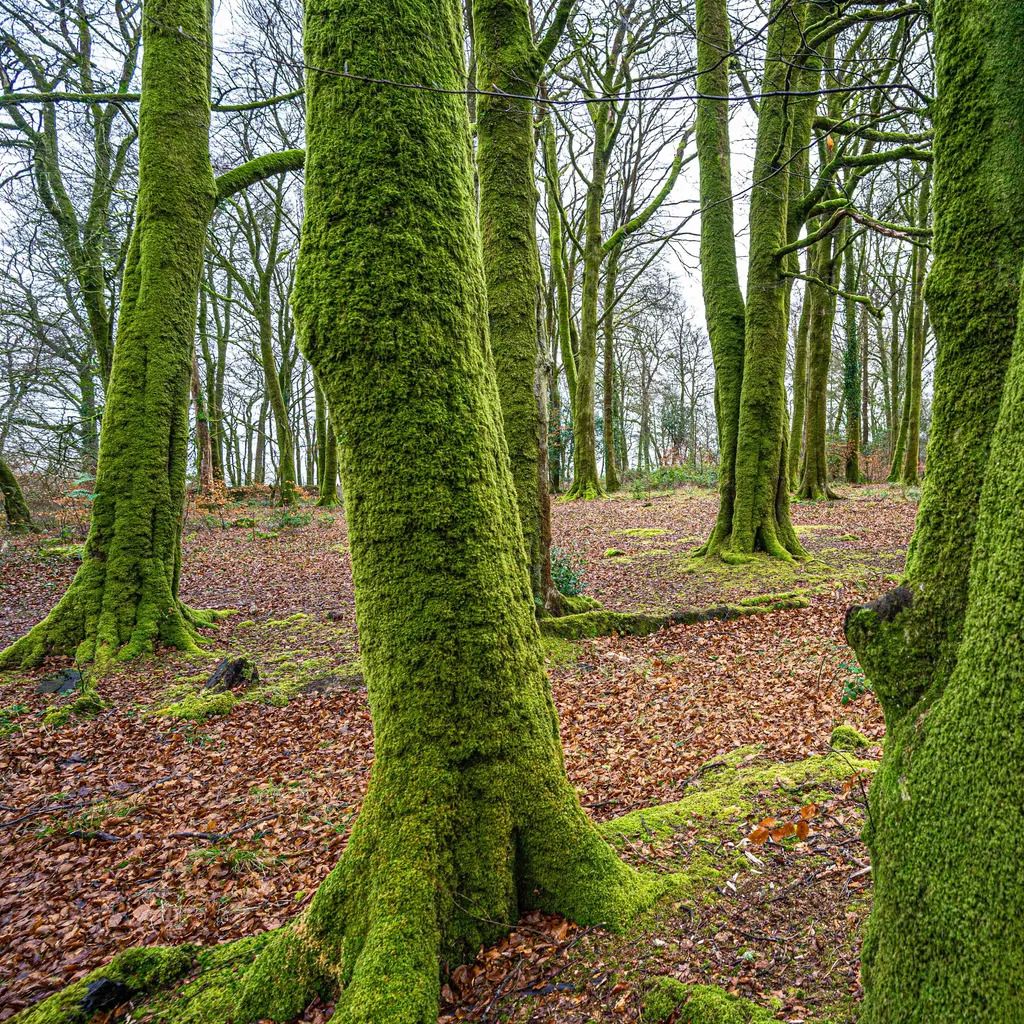 Many of the remaining fragments of rainforest can be found in Devon, such as Ausewell Woods

Rainforest still clings on across Dartmoor National Park, however, and I found myself using Shrubsole's map to discover more areas to visit. Some, like Becky Falls or Lydford Gorge are well-known nature spots beloved for their tumbling waterfalls, ancient trees and mysterious folkloric associations. Other areas, like Bovey Valley Woods and Ausewell Woods, are little known but covered in polypody ferns, dripping with moss and lichens, and ripe for a rainforest hike.

These historical and complex habitats can be saved from further destruction, but delicate, long-term regeneration strategies are needed. Shrubsole believes that improved grazing habits in woodland areas can assist regeneration, while Dr Smith explained that her project is engaging and educating landowners in order to create "citizen scientists" with the knowledge and desire to manage temperate rainforest areas in the future.

The enthusiasm with which Shurbsole's campaign has been met (he's now also writing a book about Britain's lost rainforests) coupled with conservation efforts, demonstrate the real potential for bringing the United Kingdom's rainforests back to life.

Given how rainy our climate is, they're as British as a cup of tea

Shrubsole has also begun a petition, lobbying the government to "bring back Britain's rainforests" as part of wider initiatives to begin rewilding what the World Wildlife Fund labels one of the "most nature-depleted countries in the world".

He is also keen to point out that temperate rainforests can also help to reconnect the British public with the nature that's found on their doorstep. "Rainforests may seem exotic," said Shrubsole, "yet they're a deep part of Britain's heritage. Given how rainy our climate is, they're as British as a cup of tea."