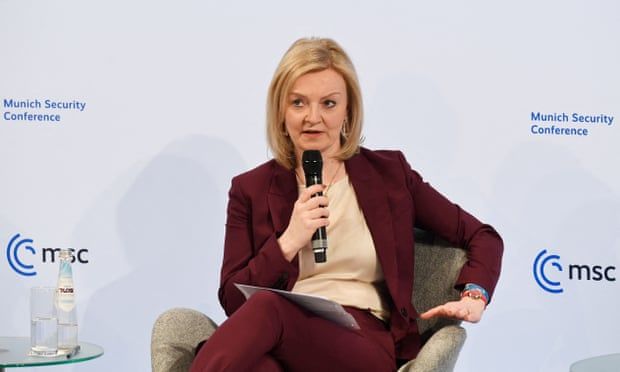 EU capitals concerned UK is not ensuring identity of real estate owners known in event of sanctions
Britain has frustrated its EU allies and weakened the west’s financial threat to the Kremlin by failing to close a loophole that will ensure London real estate remains a safe haven for Russian money, according to diplomatic sources in Brussels.

New legislation, described as the “toughest ever” by the foreign secretary, Liz Truss, gives the UK government powers to freeze the assets of individuals linked to the Russian state in the event of an invasion of Ukraine but fails to “capture” property owned via anonymous offshore structures.

The irritation in EU capitals at the perceived hole in the UK’s sanctions threat has only been exacerbated by Boris Johnson’s repeated calls in recent days for European governments to “wean” themselves off dependency on Russian gas.

“Parading around preaching at your allies is all very well if you have sorted your own house out,” said one diplomatic source. “But they haven’t. You only need to look at the number of empty properties in Kensington and Chelsea to know that.”

Truss had claimed that legislation laid in parliament on 10 February left the oligarchs with “nowhere to hide” as the UK is able to sanction entities and businesses of economic and strategic significance to the Russian government, as well as their owners, directors and trustees.

But EU capitals are concerned by the failure of the government to ensure that the identity of those who own real estate is at hand in the event of sanctions being necessary. According to the NGO Transparency International, more than 85,000 properties in the UK are owned anonymously by entities registered abroad.

The legal loophole in Europe’s punitive package has been the subject of discussions in recent days among diplomats coordinating Europe’s response to Russian aggression.

It is understood these concerns have been conveyed to London. A Foreign Office spokesman declined to comment.

On Sunday, Boris Johnson, speaking to the BBC’s Sunday Morning programme, conceded that the City of London had a problem with Russian money but claimed that the government would be able to expose the true ownership of property through a register of beneficial ownership.

But such a database is yet to be established despite promises made by the government since 2016. Plans for an economic crime bill had been included in the 2019 Queen’s speech but the legislation is yet to materialise.

The west has sought to show a united front on the sanctions that would be imposed on Russia if Vladimir Putin does wage war in Ukraine, with warnings from the US, the EU and the UK of “severe costs and massive consequences”.

On Sunday, the European council president, Charles Michel, told the Munich security conference: “One thing is certain: if there is further military aggression, we will react with massive sanctions.”

The UK has for a long time been a favoured hiding place for Russian oligarchs seeking to protect their wealth. Transparency International published a report last week that identified £1.5bn-worth of property owned by Russians accused of corruption or links to the Kremlin.

A report by the House of Commons foreign affairs select committee in 2018 concluded: “London’s role in hiding the proceeds of Kremlin-connected corruption risks signalling that the UK is not serious about confronting the full spectrum of President Putin’s offensive measures.”
#Boris Johnson  #Johnson
Add Comment