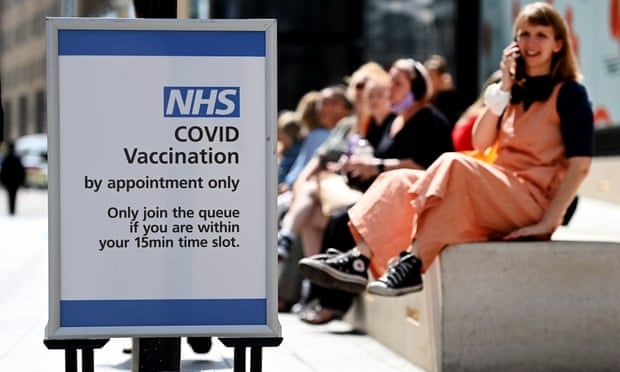 Analysis: should vaccines be used for children and booster shots or go toward the global effort to save lives?

The UK’s Covid vaccination programme has been an astonishing effort. To date almost 89% of adults have received their first dose and just over 73% have had their second.

And the programme is set to expand. Children over the age of 12 who are extremely vulnerable or live with someone at risk are already offered the jab, but this week the Joint Committee on Vaccination and Immunisation (JCVI) recommended that 16 and 17-year-olds should also be offered their first dose of the Pfizer/BioNTech jab. Booster shots are also expected to be rolled out later this year to the most vulnerable.

But while those in the UK may be breathing a sigh of relief that they and their loved ones have some protection against Covid, global health experts have reiterated calls for richer nations to think of those in poorer parts of the world where coverage is far lower.

The World Health Organization (WHO) called on Wednesday for a moratorium on booster shots until at least the end of September to ensure at least 10% of the world is vaccinated. The WHO also said in May that richer countries should postpone giving children and teenagers Covid vaccines and focus on boosting supplies for vulnerable people in poorer nations. 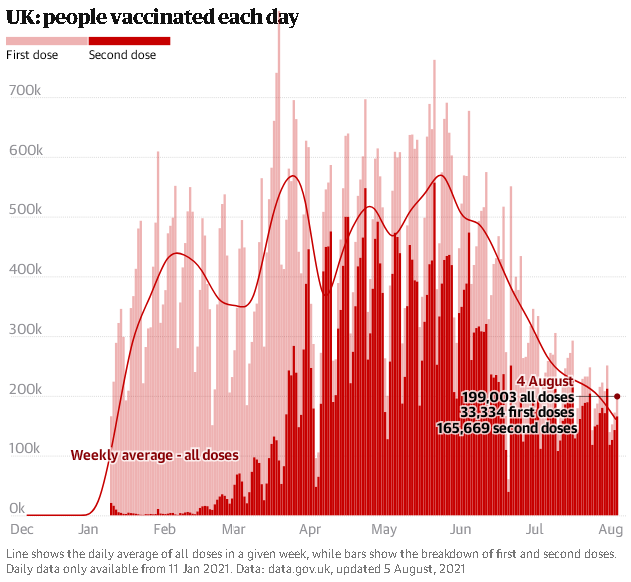 Experts have stressed that it is in countries’ interest to share vaccines because reducing transmission means problematic variants are less likely to emerge and spread.

Attempts to ensure poorer countries receive Covid vaccines have been hampered, however, by export bans, supply shortages, patent rights and rich countries offering higher prices to buy up doses of the different vaccines.

Should the UK hold fire on expanding its vaccination programme in an effort to help others?

Prof Eleanor Riley, an immunologist at the University of Edinburgh, said it was a very difficult call. “The risks and benefits to individual children are finely balanced. The impact that vaccinating teenagers will have on the shape of the UK epidemic in the next few months is rather unclear and the global demand for vaccines continues to exceed the current supply,” she said. “I don’t envy those having to make this decision.”

With infection rates high in the UK, particularly among younger people, Dr Deepti Gurdasani, a clinical epidemiologist and senior lecturer at Queen Mary University of London, welcomed the latest expansion of the UK’s vaccination programme.

“The choice now is unfortunately between infection and vaccination for these age groups, and although severe disease occurs less often than in adults, it is far from trivial,” she said.

Vaccinating all 12 to 17-year-olds in the UK would take 8m doses of Covid vaccines, she said, and rather than giving away the doses, the UK could have far more impact by taking other actions including providing resources and funding to Covax, the global vaccine-sharing initiative, supporting technology transfer agreements for domestic manufacture and scaling up vaccine production.

“Arguments around this impeding vaccine sharing are a red herring,” she said, noting among other issues that the UK has opposed patent waivers and reduced foreign aid. 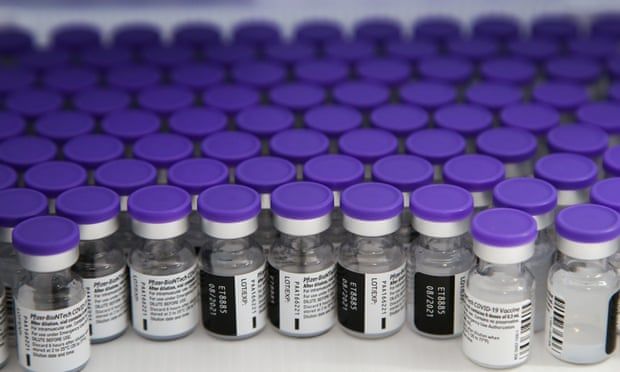 Vials of the Pfizer/BioNTech Covid vaccine.

Dr Kit Yates, the co-director of the Centre for Mathematical Biology at the University of Bath and a member of the Independent Sage group of experts, said the decision over whether to give booster jabs or vaccinate younger people was complicated, but that he agreed with Gurdasani.

“Unfortunately, teens forgoing their jabs in the UK will not mean those doses are donated to countries who are short on supply,” he said.

One concern is that infection levels could rise even higher in the autumn once schools reopen and people mix more indoors – a situation some say makes it important to expand the vaccination programme, including through booster jabs.

“Such a surge could coincide with waning immunity, and potentially lead to greater severe disease amongst the most vulnerable who were vaccinated early on,” said Gurdasani. There seemed to be little appetite from the government to mitigate such issues – for example, by making schools safer, and focusing on ventilation in indoor environments – she said.

“If the UK really wants to donate vaccines and not offer boosters, it must do this while suppressing infection, so that vulnerable people can be protected in the UK, as well as globally,” she said.

Others are adamant that the global picture must be a priority.

Prof Sir Andrew Pollard, the director of the Oxford Vaccine Group, said the Institute for Health Metrics and Evaluation in Seattle had estimated another 800,000 people would die from Covid by 1 November.

“This is an appalling human tragedy and moral failure by the international community, since the 4.25bn doses of vaccines that have been deployed so far would have been enough to prevent the majority of these deaths, if only they had been given to those at high risk of severe disease in the world, older adults and those with health conditions,” he said.

“Before we give third doses to people in rich countries who are now vaccinated and very unlikely to die, we have a duty to humanity to give first doses to the unvaccinated in a global effort to save lives.”