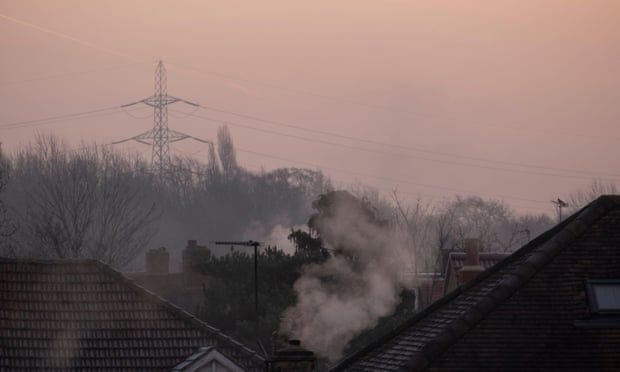 Two-thirds of all UK households will be trapped in fuel poverty by January with planned government support leaving even middle-income households struggling to pay their bills, according to research.

It shows 18 million families, the equivalent of 45 million people, will be left trying to make ends meet after further predicted rises in the energy price cap in October and January.

An estimated 86.4% of pensioner couples are expected to fall into fuel poverty, traditionally defined as when energy costs exceed 10% of a household’s net income, and 90.4% of lone parents with two or more children.

The new study by the University of York also shows huge regional variation in the cost of living crisis with 57.9% of households in the south-east predicted to be struggling with energy bills by January, compared with 70.9% in the West Midlands and 76.3% in Northern Ireland. 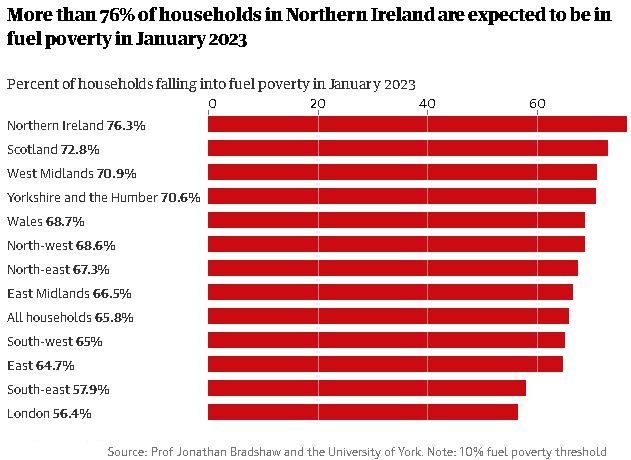 The figures come after inflation soared to a 40-year high of 10.1% – heaping more pain on households as the costs of food, energy and fuel continue to rise.

Asda chairman Stuart Rose criticised the government– which will fund a £400 universal energy grant in October as well as further support targeted at the poorest families – for a “horrifying” lack of action over inflation. “It’s going to be painful for everybody,” he told BBC radio.

“We have been very, very slow in recognising this train coming down the tunnel,” added the Tory peer.

The warning that 65.8% of all UK households will be in fuel poverty by January follows revised forecasts from the consultancy Cornwall Insight last week that annual energy bills could top £4,200 from January. Just the week before they had predicted the energy price cap was on track to rise to £3,615. 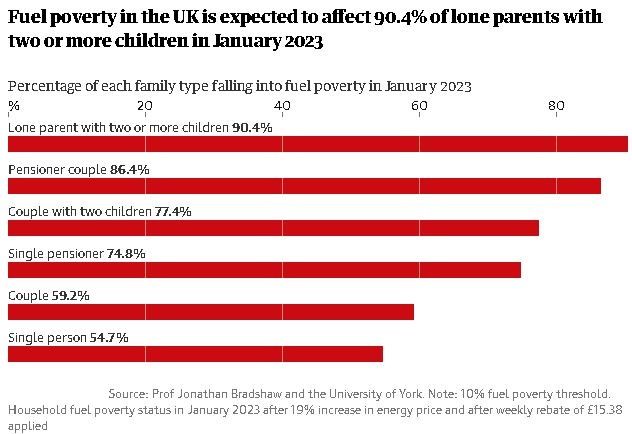 The consumer champion Martin Lewis described the latest forecast as “tragic news” and urged the “zombie government” to come up with an immediate action plan to help households.

Labour announced plans earlier this week for the energy price cap to be frozen at the current level, meaning that the expected rises in October and January would not go ahead, funded by a beefed-up £8bn windfall tax on energy company profits.

The party had faced some criticism for not focusing exclusively on the poorest households but Labour insiders suggested that the new University of York analysis showed that “squeezed middle” families would also be struggling to make ends meet.

The shadow climate change and net zero secretary, Ed Miliband, said: “These shocking figures show the full scale of the national emergency that could unfold unless the Conservative government acts to freeze energy bills.

“This is a crisis that will not just threaten the most vulnerable, but also the middle-income families and pensioners across the country, who will be despairing about how they are going to get through this winter. We simply cannot allow the British people to suffer in this way.”

The government has not proposed suspending the energy price cap rise, but it has announced an array of measures intended to help people pay their bills, and Boris Johnson has said he is certain that his successor will offer more help in the autumn, although neither candidate has yet set out a detailed plan.

In an interview with the Financial Times earlier this month, Truss appeared to rule out one-off payments to support those most in need. “I would do things in a Conservative way of lowering the tax burden, not giving out handouts,” she said when asked about energy bills.

But within days the Tory leadership frontrunner was stressing that she was offering people targeted support, with two of her key supporters, Iain Duncan Smith and Thérèse Coffey, the current welfare secretary, said to be encouraging her to use universal credit as a means of getting help with energy bills to those most in need.

Another Truss supporter, Simon Clarke, currently chief secretary to the Treasury, even hinted she might stop wealthy people receiving the £400 energy bills payout, which was announced in May by Sunak, the then chancellor, as part of a £15bn energy support package.

However, she has vowed to go ahead with plans to reverse the national insurance rise as her primary way of helping people with the cost of living crisis, even though critics say it would disproportionately benefit the better off and leave struggling middle-income families without any additional support.

At a leadership hustings in Belfast, Sunak stepped up his attacks on Truss’s tax plans, warning millions faced a “very tough time” this winter without direct support. He said the foreign secretary would be guilty of “moral failure” if she did not focus on the most vulnerable.

He added that steering the country through the winter as energy prices soared was the “most important” short-term issue.

“I think millions of people are at risk of a very tough time and I’ve been very clear that my plan is to support them,” he said.

But Truss instead insisted “taxes are too high and they are potentially choking off growth”, as she promised an emergency budget to tackle the cost of living emergency.