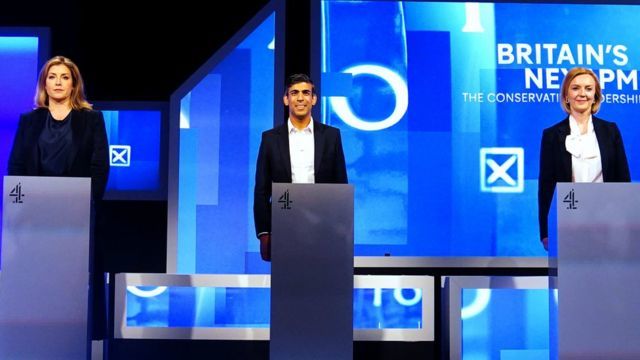 Tory leadership frontrunners have clashed over how best to fund public services and control inflation in the contest's first TV debate.

But Mr Sunak said they were needed to fund the NHS, and accused her of believing in economic "fairy tales".

All five remaining candidates in the Tory leadership race took part in the Channel 4 TV debate, the first of two this weekend. They come ahead of the next round of MPs' voting on Monday.

Tory MPs will whittle the field down to two final contenders next week, before around 160,000 Tory members decide the party's next leader in a postal vote.
In a lively 90 minutes of exchanges, the economic backdrop loomed large as candidates were

pushed on how they would fund public services and help people with the cost of living during a time of soaring inflation.

Mr Sunak, currently in pole position among MPs, was forced to defend tax rises introduced during his time as chancellor, including April's hike in National Insurance to pay for social care and the NHS.

Ms Truss, who came third in the latest MPs' voting round on Thursday, said the hike had been "wrong" and said she had "called it out" in cabinet.

She said if she won power she would reverse the rise, as well as removing green levies on energy bills - saying she would pay for it for by spreading the UK's "Covid debt" over a longer period.

The race to be our next prime minister is reaching a crucial phase.

By Wednesday, the shortlist will have been whittled down to two by Conservative MPs, who will then be put to Conservative party members over summer.

There is a lot to play for in the next few days - and you could tell in the first TV debate.

Three things stuck out for me in the exchanges.

Firstly, the Conservative Party is keen to move on from Boris Johnson.

Although it's just eight days since Mr Johnson agreed to resign, the candidates to be his successor want the next chapter to start as soon as possible.

But Mr Sunak rubbished her proposals, saying there was "no such thing as Covid debt" and warned against an "unfunded spree" of tax cuts, adding that "borrowing your way out of inflation isn't a plan, it's a fairy-tale".

Trade Minister Penny Mordaunt, currently second in the contest, said her economic blueprint, which involve raising income tax thresholds in line with inflation, was based on better "growth and competition".

When pressed by Mr Sunak that her plans would also require more borrowing, she denied she had promised to "reduce a load of taxes" but said "people need help now".

"Next April we are going to be one of the most uncompetitive nations in terms of our tax competitiveness. That cannot be allowed to happen," she added. 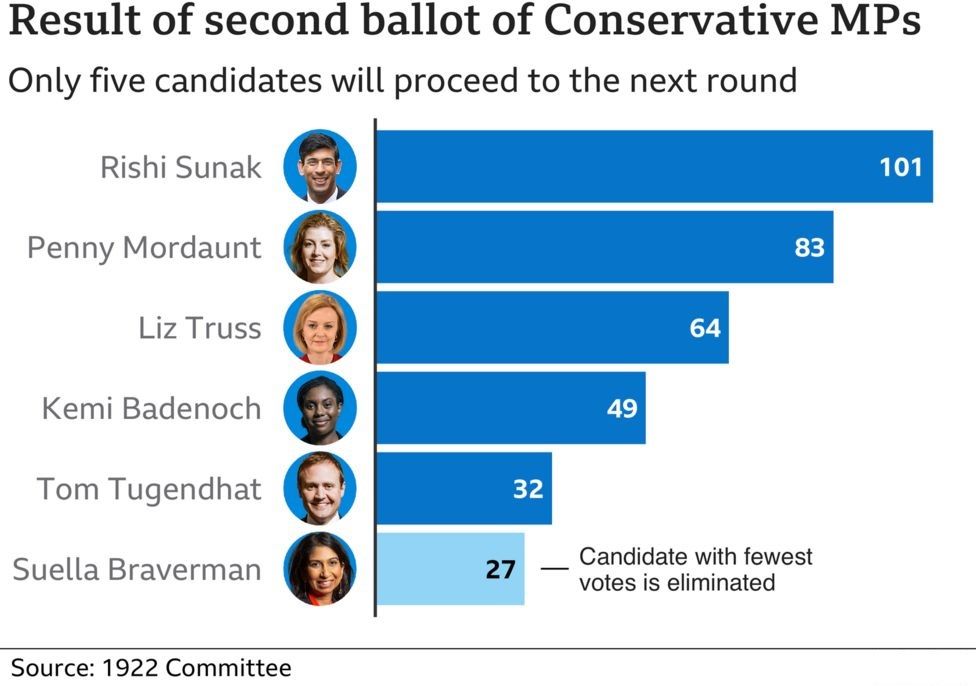 Elsewhere, candidates traded blows over Mr Johnson's legacy and trust in politics after the Partygate and Chris Pincher affairs that played a key role in the Tory revolt that forced the prime minister from office.

Mr Tugendhat, the fifth-placed contender among MPs and the only one not to have held a ministerial post under Mr Johnson, said his party needed a "break from those who sat around the table" to reset the party's direction.

He pitched himself as a "clean face" and when asked for a yes or no answer on whether Mr Johnson was honest, Mr Tugendhat was the only candidate to answer with a direct "no", which won applause from the crowd.

He also said he had not supported the National Insurance rise, calling it a "tax on jobs", and accused Mr Sunak of only backing it in office "because the boss wanted it".

But the backbench MP's interventions received a curt response from fourth-placed contender Kemi Badenoch, a former equalities minister, who said he "didn't have any responsibilities" and likened him to a pupil pointing out problems from the "back of the class".

Elsewhere in the debate:

*  Liz Truss blamed the Bank of England for high inflation, arguing "we haven't been tough enough on the monetary supply"

Ms Mordaunt also clashed with Ms Truss and Ms Badenoch over her record on trans rights during her time as an equalities minister.

In a spiky section of the debate, both Ms Badenoch and Ms Truss accused Ms Mordaunt of supporting "self-ID", a process allowing a trans person to legally change their gender without, for example, a medical diagnosis.

Ms Mordaunt denied ever supporting the policy, but Ms Badenoch, who succeeded Ms Mordaunt in the equalities role, said she found that "hard to accept" and her understanding was Ms Mordaunt had pushed for it.

Ms Truss, who also had responsibility for equalities alongside her role as foreign secretary, said she had "changed the outcome" of a consultation to ensure self-ID was not brought in.