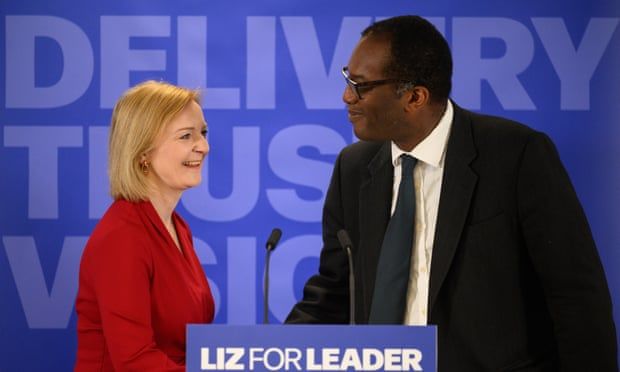 The UK is at a perilous tipping point. But what is Truss planning to do about it?

Each day brings more news about a spiralling catastrophe – the economy is crying out for major government intervention
The gigantic scale of the oncoming economic shock becomes clearer by the hour. Click – and there’s Goldman Sachs predicting a 22% inflation rise next year. Click again and Bloomberg reports UK energy companies will make £170bn in excess profits over the next two years. If interest rates do hit 4%, banks too will roll in unearned mortgage money, plus shedloads from money loaned to the government. Fine profits will be made from national misery.

Each day dawning reveals how everything, everywhere, is at a perilous tipping point. Martin Lewis warns that lives will be lost from cold and hunger, amplified by Sir Michael Marmot’s warning yesterday of children in grave peril. Lewis is not “catastrophising”, he says: “This is a catastrophe, plain and simple unaffordable.” If only he were to be the new chancellor … carry on with your own Jack Monroe-and-Marcus Rashford dream team.

But next week we face the appointment of a leader with nothing to say that acknowledges the enormity of the calamity ahead, whose defining policy of tax cuts is the perverse opposite of what’s required. In the great crunch of 2008, Gordon Brown and Alistair Darling staved off imminent calamity with policies that had been unimaginable to them only a day earlier: nationalising banks, bailouts and a quantitative easing bonanza. Is anyone confident that Liz Truss and Kwasi Kwarteng will plan on anything like the scale required?

Rishi Sunak pitching to Tory party members in leafy Hertfordshire this week faced not one question – not a single one – concerning the cost of living crisis. From this twilight zone of unreality emerges a leader unfit to grapple with the worst crisis of our lifetime, with a typical 10% fall in disposable income predicted by 2024, according to the Resolution Foundation, which would be worse than during the 1970s oil shock, the worst in a century.

New perils come daily. Corner shops and pubs will close. Libraries and museums can’t be warm hubs for cold people as they shut to save fuel bills. Schools, hospitals, nurseries and colleges can’t pay. Credit card borrowing will soar, and food banks are already running out of food.

Of course people will strike wherever they have unions to organise them: already their demands fall well behind the latest predicted inflation figures. Their immediate employers can’t pay from government-restricted budgets: only government can pay out. “Restraint” is demanded by the Bank of England governor with nothing said about the 39% rise for FTSE 100 CEOs this year, as reported by the High Pay Centre. The wonder is not that unions are “militant” (they’re not) but that they have been so acquiescent over the last austerity decade of falling real wages. Why? It takes exceptional outrage for union members to vote to strike, suffering lost pay with an uncertain outcome. This time the pay cuts are too shocking to tolerate.

Facing this unthinkable catastrophe, the only solutions are things once deemed politically unthinkable. The idea that a £30bn tax cut is the answer defies reason, especially when biased to benefit the best off. Why would cutting corporation tax lead to “growth” when company investment was absent even in better times? When six companies alone made £16bn excess profit during the pandemic, what’s needed is walloping windfalls on profiteers, as Labour urges.

This is a wartime emergency, with the west resolute against Putin’s invasions. In a war paid for by Ukrainians with their lives, we are obliged to pay with our money. But whose? Everyone’s, but the most ought to come from those with the broadest shoulders. In wartime, money is conscripted in the form of war bonds, in a solidarity tax and in property taxes, since that’s where most wealth resides. Public services must survive, public servants can’t pay the price and nor can collapsing small businesses. Massive, Covid-era-style support is a necessity for social survival. The very minimum immediate action requires universal free school meals to stop any child starving, and an instant, inflation-matching rise in already puny universal credit. But far more than that for many more households is essential if we are to prevent Marmot’s worst predictions.

Rowan Williams is among more than 500 clerics proposing a 1% wealth tax on those with £2m or more. Prof Arun Advani of Warwick University says a one-off 1% raid, to be paid over five years, would raise £80bn. Invest that in renewables and insulation to head for energy near-self-sufficiency, so that the country can protect against future energy shocks.

Liz Truss, writing an ineffable stream of balderdash in the Sun yesterday, pledged as “a freedom-loving, tax-cutting Conservative” to “lead the British people through the economic storm with my clear and truly Conservative plan” with “bold action such as tax cuts, decisive reforms and slashing senseless red tape”. How far she strays from voters is hinted at in the Sun’s own oddly zig-zag leader, which warned her: “Tax cuts and growth are vital as a direction of travel for her Tories – but they won’t stop the poorest freezing in December.” And it tells her not to “protect Shell and BP’s billions out of misguided ideology”.

But in her final hustings this week, she pledged no windfalls, no new taxes, no energy rationing (and maybe no speed limits either). No one alive has witnessed an economic cataclysm such as this – and that’s her unthinkable response.
#Covid
Add Comment