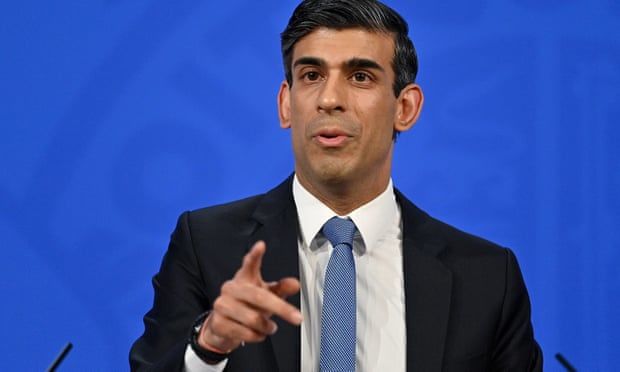 Amid mounting pressure from inside his own party, and with some City analysts predicting inflation could hit 10% within months, the chancellor has asked Treasury officials to draw up options for cushioning the blow for consumers.

But Treasury sources stress that the government cannot protect the public from what is a global crisis – and underline the fact that the public finances are weaker than at the start of the pandemic, when Sunak took radical steps, including the furlough scheme.

“We have dealt with one crisis that was supposed to be once-in-a-generation, and we have just walked into another one,” they said. “There’s only so much that can be done, and we’ve never seen oil prices where they are now.”

One widely mooted option would be to raise state benefits by more than the 3.1% pencilled in at last autumn’s budget, which looks set to amount to a hefty real-terms cut, given the rapid increase in inflation since.

Torsten Bell, director of thinktank the Resolution Foundation, said: “Fast-rising inflation and income falls on a scale only seen in recessions will be the defining economic feature of the year ahead. The war in Ukraine has only deepened the squeeze that households will face.

“The chancellor cannot protect the country from the economic pain that higher energy prices bring, but he can decide who bears the burden. His top priority for the spring statement should be to ensure benefits don’t fall £10bn behind the fast-rising cost of living.”

Other options could include a further cut to the universal credit taper rate, which Sunak reduced in his October budget, allowing claimants to keep more as their earnings go up; or unfreezing personal tax allowances, which are due to drag more people into paying higher rates.

The prime minister acknowledged that consumers were facing difficult months ahead, as the UK and European economies are weaned off Russian energy. “Now is the time, and it may be a bumpy period, but we’ll get through it as fast and well as we possibly can.”

Boris Johnson told Beth Rigby on Sky News that the government would do “everything we can to help households,” including continuing to freeze fuel duty, but “the best thing for dealing with the cost of living, I mean big picture, is to have a strong economy, good high wage jobs.”

The former Tory prime minister David Cameron has called on the government to cut taxes in the teeth of the crisis – but while Sunak has insisted he wants to be a tax-cutting chancellor, he remains committed to April’s 1.25 percentage point increase in national insurance contributions to pay for health and social care.

Domestic fuel bills are expected to rise by an average of almost £700 a year when the price cap set by the regulator Ofgem is raised in April. In response, Sunak has promised a £150 council tax rebate for properties in bands A to D next month, and a £200 cut to energy bills in October, to be repaid over five years.

Labour have attacked the buy-now-pay-later nature of the scheme, and called for a more generous package, funded by a windfall tax on the energy companies.

Johnson defended the plan robustly on Wednesday at prime minister’s questions, but it later emerged that his team had commissioned Kwasi Kwarteng’s business department (BEIS) to look at ways of making it more generous.

First revealed by Politico, these are understood to include doubling the energy bill cut, to £500 – but crucially, they would not be implemented until October, the next time regulator Ofgem is due to update the price cap.

Surging oil and gas prices since Vladimir Putin’s invasion of Ukraine and the resulting sanctions on Russia have led to predictions that bills could be set to soar once again in the autumn.

But a Treasury source said it was not yet clear whether the energy bill scheme would need to be strengthened: “We’re not in the business of putting together policy responses when we’re not sure what the problem we’re trying to solve is”.

BEIS officials stressed that it was not unusual to be asked to come up with policy options for future contingencies – but the fact Number 10 asked for the work underlines the scale of concern in government about soaring living costs.

Sunak told an audience at the London School of Economics earlier this month: “As ever part of my job is always to be listening to people and making sure the policies that we’ve got in place are the right ones to help the economy, to help families and people can judge me on my track record about how we do that.”
#Boris Johnson  #Johnson
Add Comment