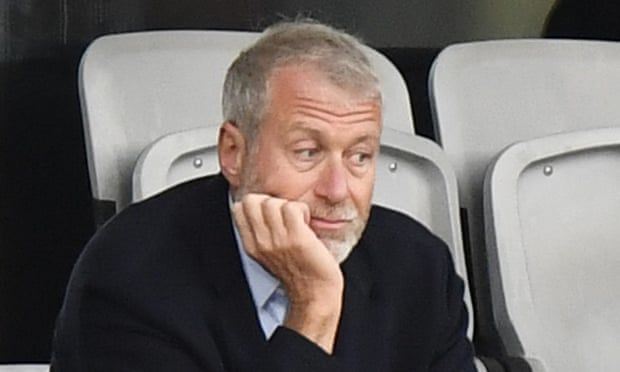 The text will now recognise that the allegation Abramovich bought Chelsea football club at the Russian president’s behest is not a statement of fact. It will include additional denials from the oligarch’s spokesperson and the club.

It will also correct a claim that the late oligarch Boris Berezovsky co-owned the Russian oil company Sibneft with Abramovich. The amendment follows a 2011-12 high court legal battle between the two men, which Abramovich won. The book’s publisher, HarperCollins, has agreed to make a payment to charity “in recognition of this error”, it said.

Abramovich sued over a number of claims, including that he bought Chelsea on Vladimir Putin’s orders. He was one of three Russian tycoons who initiated libel proceedings against Belton and HarperCollins, together with the Russian state oil company Rosneft.

The other defendants subsequently settled or withdrew their claims. Abramovich ended his case after HarperCollins said on Wednesday some information concerning the oligarch was inaccurate. It agreed to make revisions to the book, widely acclaimed as the definitive work on the Putin era.

HarperCollins hailed the overnight settlement as a fair agreement. There are no damages being paid to Abramovich himself. Both sides will pay their own costs. Had the libel trial gone ahead in the high court next year the legal bill was likely to have exceeded £10m, it is understood.

The publisher said: “While the book always included a denial that Mr Abramovich was acting under anybody’s direction when he purchased Chelsea, the new edition will include a more detailed explanation of Mr Abramovich’s motivations for buying the club.

“HarperCollins has also made clear in the book that there is no evidence, beyond the statements of the individuals themselves, supporting claims made to the author by [the former Kremlin insider] Sergei Pugachev and two other unnamed individuals about the purchase of Chelsea Football Club.”

HarperCollins acknowledged that a high court judge described Berezovsky as an “inherently unreliable witness”. It added: “HarperCollins and the author apologise that these aspects of the book were not as clear as they would have liked them to have been and are happy to have now clarified the text.”

Chelsea FC said it was pleased HarperCollins and Belton had “apologised to Mr Abramovich” and agreed to amend the book. Several false claims about him had been removed, it said, adding they “lacked evidence and were indeed false”.

The club said the publisher had agreed to add or delete “over 1700 words”. The sole reason the oligarch had issued his claim was to “refute the false allegations” published about him, including over his purchase of Chelsea and its activities.

The statement went on: “As the objectives of this legal claim have never been punitive, we have not asked for any damages to be paid. We have, however, asked that HarperCollins makes a donation in lieu of damages to a charitable organization, to which they have agreed”.

Despite the revisions, the agreement is being seen overall as a victory for Belton, who has come under unprecedented legal assault from billionaires with Kremlin ties. Abramovich served for eight years as governor of Chukotka, a region in Russia’s far east. He has consistently denied being under the Russian government’s control.

In a statement, she said “this last year has felt like a war of attrition” in which she had been “bombarded with lawsuits” from four Russian billionaires and Rosneft.

Belton added: “Though the claimants have denied it was coordinated, it has seemed to me similar to the Kremlin’s multi-pronged campaign against Ukraine in which it has sought to exhaust the west into making security concessions over Nato’s expansion.”

She continued: “Throughout, HarperCollins has staunchly defended the book. I could not have wished for a better or braver publisher more committed to public interest journalism.”

Campaigners have described the case against Belton as an abuse of the UK’s libel system. Abramovich sued the former Financial Times journalist personally as well as her publisher.

The settlement was made following an approach by Abramovich, it is understood. HarperCollins said Belton had always been willing to include the oligarch’s comments on the allegations, and recognised that books on controversial contemporary themes needed updating as new information emerged.

At a preliminary hearing in November, Mrs Justice Tipples ruled that several passages in the book that Abramovich said conveyed untrue statements about him were defamatory of him.

One such claim was the suggestion that Abramovich was “under the control of Putin” and that the oligarch was obliged “to make the fortune from his business empire available for the use of President Putin and his regime”, Tipples wrote, in a 34-page ruling. But she ruled three out of four sections complained of by Rosneft were not defamatory, with the oil firm subsequently shelving its case.

Tipples emphasised that the court was only, at that point, adjudicating on meaning. It was not deciding whether the allegations made about Abramovich or anyone else were true or false. Following Wednesday’s settlement the claims will not be tested in court.

At the initial hearing, Abramovich’s lawyer said the book repeated “lazy inaccuracies about Abramovich’s role in various events” and made false and damaging statements about him which were “completely without foundation”.

Belton spent seven years writing Putin’s People and was based in Moscow as the bureau chief for the FT. Last month, she was named the 2021 outstanding investigative journalist in awards named after Sergei Magnitsky, a Russian anti-corruption lawyer who died in jail.
Add Comment