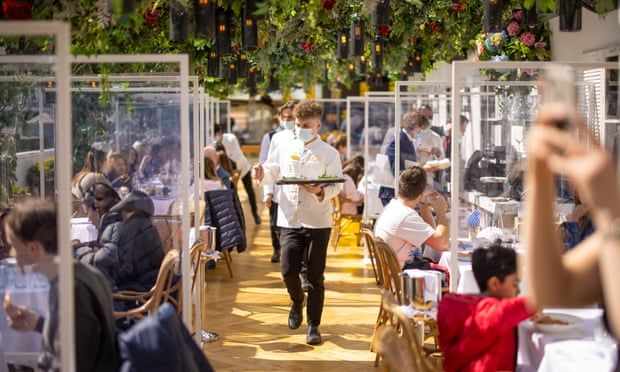 Business groups call for government to support hospitality industry including nightclubs and bars
Business groups have warned that pubs, bars, restaurants and nightclubs face significant hardship or collapse after the easing of Covid-19 restrictions in England was postponed for four weeks without new financial support from the government.

Full reopening without measures such as social distancing will not be allowed until 19 July, Boris Johnson said on Monday, with a review in two weeks’ time “unlikely” to result in an earlier relaxation.

But the chancellor, Rishi Sunak, shied away from offering any fresh funding package to prop up hard-pressed businesses that cannot trade profitably, or at all, under the restrictions.

The UK’s largest trade bodies joined hospitality businesses and trade unions in urging the government to change its mind and come up with new support measures, warning that businesses will be driven to the wall otherwise.

Tony Danker, the director general of Britain’s most powerful business lobby group, the CBI, said the government “must urgently revisit the support available”, including the tapering of business rates relief and a moratorium on landlords’ right to collect commercial rent.

Both are due to end on 1 July, signalling looming extra costs for debt-laden hospitality venues that will still be subject to restrictions on how many people they can serve.

The night-time economy, predominantly late-licence pubs and nightclubs, has been hit particularly hard, with most businesses having been closed for 15 months.

The Night Time Industries Association chief executive, Michael Kill, said the government had “switched the lights off” for the sector by extending restrictions – which include a bar on nightclubs reopening and limits on large events and performances – without offering any new help.

An NTIA survey found that one in four night-time economy firms, such as nightclubs and bars, don’t expect to survive the extra four weeks.

The co-founder of the London nightclub Fabric, Cameron Leslie, called the delay “a punch”, saying huge amounts had been spent getting ready for 21 June.

“You can’t just turn venues like Fabric on,” he said. “This is is a big machine that has been dismantled.”

The British Beer and Pub Association (BBPA) said the delay would cost pubs £400m and demanded more support and no further delay beyond 19 July. Pubs have been operating with reduced capacity because of social-distancing guidelines and limits on household mixing.

“Our pubs require as a minimum an immediate three-month extension to the business rates holiday, the ability to defer loan payments due now and a further extension of VAT support.

“Grants for businesses particularly affected, such as those pubs who cannot still reopen because of the current restrictions, must now also be put in place.”

Kate Nicholls, the head of UKHospitality, which represents pubs, hotels and restaurants, said many debt-laden firms in England would struggle to cope from 1 July, when they will have to start paying business rates again, albeit at reduced rates.

“For many small pubs and independent restaurants that would be the final nail in the coffin,” said Nicholls.

Pubs chain Greene King said the extra burden of business rates – a tax on commercial properties – would cost it £250,000 a week.

Nicholls also warned that business prospects were still mired in uncertainty about £2.5bn of rent debt that has built up during the pandemic.

Government officials are trying to broker a deal under which commercial landlords agree not to charge tenants the full amount for arrears on rent due since March 2020.

Under proposals put forward by the hospitality industry – and some property firms – tenants such as pubs and restaurants would get a further six months to negotiate with landlords.

Under the proposals the government would set a guideline that landlords forfeit 50% of rent debt. Where the two sides cannot agree on how much rent should be due, hospitality bosses want an official arbitration process that would last up to a further six months.

While restrictions will not be eased on most hospitality businesses, weddings can go ahead with more than 30 guests so long as social distancing measures are in place, the government said on Monday.

Siobhan Craven-Robins, a wedding planner and director of the National Association of Wedding Professionals, said the decision to allow larger celebrations to go ahead with socially distanced measures was partly good news but leaving only a week’s notice of a change in the roadmap was “massively disappointing.”

She said that venues would not be able to fit in their full compliment of guests with social distancing. “A lot of people will be uninvited and there will be another wave of postponements,” she said.

Most of the music festivals that were still slated to go ahead this summer will be cancelled without government support, the industry said.

The Association of Independent Festivals (AIF) called for the government to provide guarantees so that festivals could secure the insurance they needed to welcome revellers.
#COVID-19  #Covid  #Boris Johnson
Add Comment