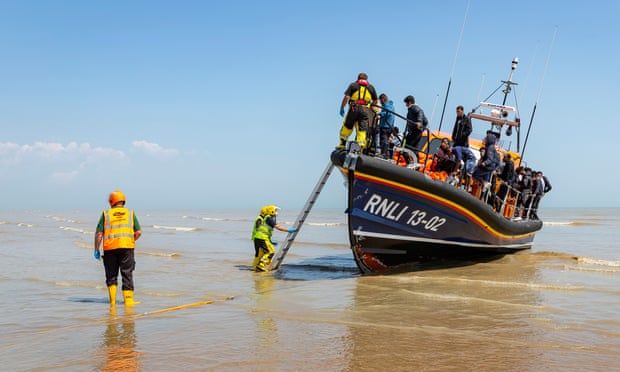 Record number of migrants cross Channel in one day

Priti Patel asylum bill, branded ‘anti-refugee’ by critics, condemned as both cruel and ineffective by critics
Humanitarian groups have warned that Priti Patel’s new asylum legislation will do nothing to address the root causes of dangerous Channel crossings, following a record-breaking day of people arriving in Kent in small boats.

The Home Office said that at least 430 people made the crossing across the Dover Strait on Monday, a new daily record.

In Dungeness, also in Kent, about 50 people, including women and young children, were seen arriving on a beach after crossing the Channel in a single dinghy.

The previous daily high for arrivals was in September when 416 people arrived in the UK from across the Channel.

Patel, the home secretary, pledged to make the crossing “unviable”, but people have continued to make the dangerous journey this summer.

Patel’s flagship asylum legislation, the nationality and borders bill, which had its second reading in the Commons on Monday, has been branded the “anti-refugee bill” by critics.

But refugee charities have said that as well as being cruel the bill would not solve the issue of Channel crossings.

Tim Naor Hilton, the chief executive of Refugee Action, said: “The government’s relentless desire to raise the drawbridge without creating more routes to safety leaves desperate refugees with little choice than to put their lives in the hands of people smugglers.

“And the cruel and unworkable anti-refugee bill is pure political theatre that makes no attempt to improve our asylum system or address the root causes of Channel crossings.

“Ministers must throw out this extreme bill and instead design an effective and just asylum system that creates more routes to safety, such as family reunion, and a long-term resettlement programme that welcomes 10,000 refugees a year.”

Beth Gardiner-Smith, the CEO of Safe Passage International, said: “In the last year this government has presided over the closure of nearly all safe routes to the UK for refugees in France and other countries, so it’s no wonder smugglers are exploiting those who are faced with no other option to reach family and safety.

“Now instead of opening safe routes the government plans to rip up refugee rights, and criminalise and punish those seeking protection with their Nationality and Borders bill.

“The government must ditch these inhumane and unworkable plans and open safe routes to save lives. This would prevent Channel crossings and break the business model of smugglers, whilst reuniting separated families and offering hope to child refugees stranded and alone in Europe.”

The bill would make it a criminal offence to knowingly arrive in the UK illegally, and people could face up to four years in prison. It also includes clauses that would allow the UK to send asylum seekers to a “safe third country”.

Eight boats carrying 241 people arrived in the UK on Saturday, and, to date, nearly 8,000 people have reached the UK this year, according to analysis by the PA Media news agency.

The dinghy that reached Dungeness is believed to have left northern France or Belgium earlier in the day before crossing the 21-mile Dover Strait. It was watched by the Royal National Lifeboat Institution as it approached before landing at about 1pm. The migrants included children who were too young to walk, and some of the people needed help as they walked on to the beach.

Despite the surge in such crossings, the UK continues to see far fewer boat arrivals and asylum claims than many of its European counterparts.

At least 44,230 people have arrived in Europe via the Mediterranean by land and sea so far this year, according to data from the UN High Commissioner for Refugees.

Despite the sharp rise in small boat arrivals on the UK south coast, asylum applications in Britain fell in 2020 to 29,456. This was significantly lower than the 93,475 asylum applications made in France and the 121,955 in Germany.
#Priti Patel
Add Comment