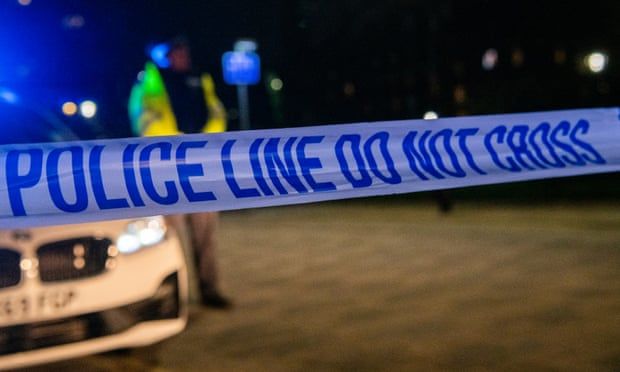 Exclusive: Tribunal details litany of offences over six years by PC Ryan Connolly, who resigned from Merseyside force before hearing

A police officer took selfies at a murder scene where a teenager had been stabbed to death, and sent “appalling” racist, homophobic and offensive images via WhatsApp, the Guardian has learned.

PC Ryan Connolly from the Merseyside force committed a litany of disciplinary offences over a six-year period while a serving officer, a tribunal has decided.

While on duty, he also took photos on his mobile phone of people in mental health crisis, in hospitals, who had been sectioned under police powers.

His case echoes that of the two Metropolitan police officers who used their mobile phones to take pictures at the scene where two sisters lay murdered. The pair were convicted in court and sacked in a case that rocked policing.

Details of Connolly’s wrongdoing have been confirmed by Merseyside police after inquiries by the Guardian.

The Merseyside force said Connolly’s actions had undermined public confidence in policing, and were an “insult” to the majority of officers who served the public with distinction.

The discipline tribunal found Connolly guilty of gross misconduct. He had resigned before the November hearing, and after the tribunal he was formally sacked by Merseyside police.

Merseyside police said their anti-corruption unit had caught Connolly and his “offensive behaviour”. Connolly had also had an association with a known criminal without informing his bosses.

Connolly joined the force in January 2003 and had served under the police identification number 2133.

According to papers lodged with the tribunal, his offending against police rules began in 2014.

Connolly was accused of a litany of offences, mainly involving his personal Samsung mobile phones.

The discipline panel found that Connolly took photos, or had images on his phone he should not have had, and that he frequently shared them.

*  Connolly had photos and graphics that were grossly racist, and one depicting Muslim people. He also had an image of a Ku Klux Klan member.

*  In 2016 and again in 2017, while on duty, he took photos on his mobile of men detained by police under mental health powers, who were in hospital, and shared it via WhatsApp.

*  While on duty he took and sent a photo of men in hospital on at least two occasions.

*  He took photos of people who had been arrested.

*  In October 2015 he took a photo, while on duty, of someone who had slashed their wrists, and shared it via WhatsApp.

*  He took a photo of a fellow officer’s rear and shared it via WhatsApp.

*  He took photos in 2018 of himself at a murder scene where he had been assigned to guard the cordon after a teenager had been stabbed to death.

*  He took photos of crime victims, including someone missing from home, and shared details about a woman who went to police for help alleging she had suffered domestic violence.

He was cleared of trying to acquire cannabis while a serving officer.

When interviewed by detectives from professional standards, Connolly made no comment.

Before the discipline hearing, he provided a written statement, saying he did not know why offensive images were on his phone.

Merseyside police’s deputy chief constable, Ian Critchley, said: “Connolly had taken photographs of vulnerable people on his personal phone whilst on duty … This breached the duty of confidence; lacked honesty and integrity and through his discreditable conduct he has undermined public confidence.

“Between 2015 and 2018 Connolly stored images on his personal phone that were racist, homophobic and severely offensive and on some occasions had shared those images.

“Connolly maintained contact with a known criminal and did not disclose the relationship… as a result, by socialising and associating with the criminal, brought the service into disrepute.”

Critchley added: “An investigation by our anti-corruption unit uncovered the fact that Connolly had been using his own phone to take photographs of vulnerable people whilst on duty and that the phone also contained appalling homophobic, racist and offensive images.”

He added: “The behaviour of this officer is deplorable and serves to undermine the public’s confidence and trust in the police.

“Our officers carry out exceptionally brave selfless acts every single day, protecting the most vulnerable people in our communities, yet here we see the despicable acts of a very selfish individual who has no place in our police service.”

Police said the pictures from the murder scene only showed Connolly and did not show the teenage murder victim.

Merseyside police say they will enhance their vetting procedures following the case.

Connolly, in a written statement to the tribunal, said he could not recall the offensive images, after they were shown to him during interview by detectives, or how they came to be on his phone.

He added: “I do have the insight to know that the images should not have been in my possession.

“This has been a learning experience for me to be more mindful of the WhatsApp groups that I am in and being more aware [of the] material that is sent to me.”

Connolly’s phone were seized in February 2020 by detectives from Merseyside’s anti-corruption unit.

He resigned before the discipline tribunal in November, which ruled he would have been sacked if still a serving officer. He is barred for life from rejoining the service.