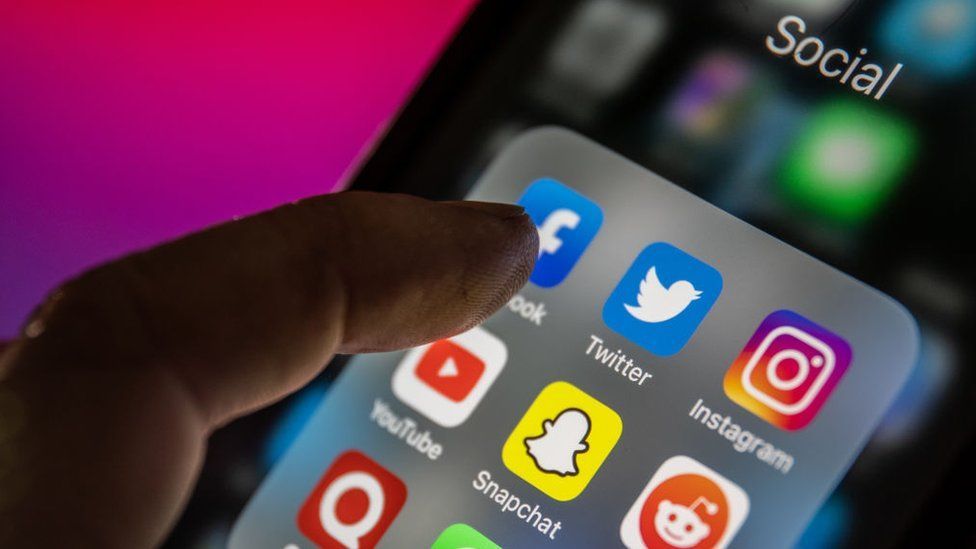 Plans for new internet safety laws have been put on hold until a new prime minister is in place in the autumn.

The Online Safety Bill is a bid to lay down rules in law about how platforms should deal with harmful content.

It had been in its final stages and was to be discussed in Parliament next week, but it will now be put on pause until MPs return from summer break.

A government source confirmed to the BBC that timetable pressures meant the bill is being rescheduled.

The bill is at report stage, which means MPs can discuss amendments. It was expected to clear the Commons later this month before proceeding to the House of Lords.

The bill's aims are to:

* prevent the spread of illegal content and activity such as images of child abuse, terrorist material and hate crimes, including racist abuse
* protect children from harmful material
* protect adults from legal - but harmful - content

The legislation largely puts the onus on the tech giants, like Meta - previously Facebook- and Google, to figure out how it would meet those aims. It also empowers Ofcom as a regulator to police whether they do a good enough job.

Firms that fail to comply with the new rules could face fines of up to £18m, or 10% of their annual global turnover, whichever is highest.

The bill also requires pornography websites to use age verification technology to stop children from accessing the material on their sites, and there will be a duty for the largest social media platforms and search engines to prevent fraudulent advertising.

A government source suggested Parliamentary time had been reduced because of the demand from the Labour Party for a formal vote of no confidence in the government and the prime minister.

The government source said: "Parliamentary time got cut because of Labour's pointless motion.

"It was either the Northern Ireland Protocol Bill or the second day of the Online Safety Bill report stage that got dropped to allow Labour to have time to play politics.

"The Online Safety Bill lost out."

She said: "This is a fundamentally broken bill - the next prime minister needs a total rethink.

"It would give tech executives like Nick Clegg and Mark Zuckerberg massive amounts of control over what we all can say online, would make the UK the first democracy in the world to break encrypted messaging apps, and it would make people who have experienced abuse online less safe by forcing platforms to delete vital evidence."

The bill has been criticised by some, including Conservative ex-minister David Davis who this week described it as "extraordinarily controversial" and called for it to be delayed.

A new prime minister is expected to be announced on 5 September.

The first draft paper of this bill was introduced by former PM Theresa May back in 2019.

The last three years have seen seemingly endless revisions and amendments and the OSB continues to generate huge debate. Some say that in itself is an indication of how flawed it is.

The government says it is designed to make the internet a safer place, and to shield people, especially children, from harmful content. Punishments for tech firms who do not remove this material quickly enough or do enough to actively prevent it from appearing in the first place, include huge firms and even prison sentences for individual executives.

In its current form the bill gives enormous powers to the regulator Ofcom, which has in response been busy recruiting an army of specialists - although critics argue that parts of the rules are hard to enforce or require tech tools that don't yet exist.

For example, currently the most popular messaging platform, WhatsApp, uses end-to-end encryption - this means only the device which sends a message and the device which receives it can read it.

The tech firms themselves have no oversight of them and there is no backdoor for law enforcement. They can only be fully scanned for harmful content if there is a chink in this armour - which would also open the door for bad actors to exploit.

The government itself has in the past taken advantage of the privacy provided by end-to-end encryption - back in March it was revealed that PM Boris Johnson was receiving sensitive data via WhatsApp.