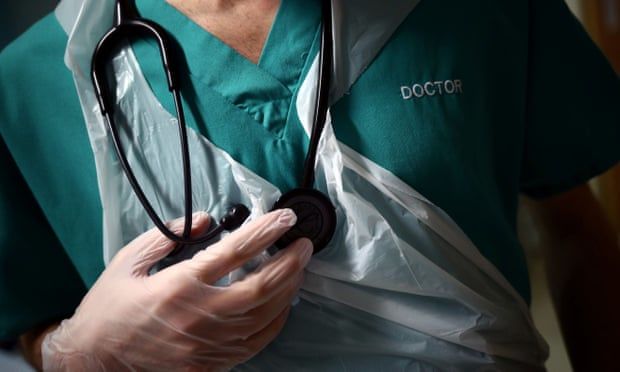 Exclusive: doctors will use pay row to expose ‘desperate state’ of NHS after years of government neglect, Prof Philip Banfield warned
A doctor’s strike is “inevitable” and will expose how dangerously threadbare the Conservatives have left the health service, the profession’s new leader has said.

In his first interview since taking over as the British Medical Association’s chair of council, Prof Philip Banfield warned ministers that doctors will take the fight to them by using a pay dispute to tell the public patients are dying as a direct result of government neglect of the NHS.

Members of the doctors’ union voted last month to seek a 30% increase in their salaries over the next five years. This would amount to a “full pay restoration” for the real-terms cut in income they have suffered since 2008, through years of pay freezes and 1% or 2% annual uplifts. Ministers criticised the claim as unrealistic and unaffordable.

Banfield said: “Doctors are angry, frustrated and feeling undervalued. There is very, very serious discontent [about pay]. After 14 years are doctors worth 30% less? No. I mean, if anything they are worth 30% more.

“It’s almost inevitable that the path taken by whatever government happens next will lead us into direct collision with them. Why are we doing it? If you don’t have doctors, you don’t have the NHS.”

Strikes would most likely happen next spring, he added.

His remarks come as ministers prepare to announce the pay award for all UK NHS staff in the coming days, after considering advice from the two health service pay review bodies. Health unions have already warned of potential walkouts by NHS personnel if they do not receive rises that at least match inflation, which is running at 9.1%.

In a significant hardening of the BMA’s position, Banfield added that junior doctors want the 30% increase to be “immediate” and not phased in over the next five years.

Junior doctors are more prepared to take industrial action over pay now than when they staged a series of walkouts in 2015-16 in protest at a new contract imposed by then health secretary Jeremy Hunt, he said. They are “on a collision course with the government”, Banfield added.

Medics would explore every avenue before staging walkouts in order to ensure the normal functioning of NHS services. “No one wants to go on strike. We will be trying to avoid that. But that is not at all costs. Because there is no sellout to be had here,” added Banfield, in comments which underline why some fellow BMA council members privately call him “the BMA’s Mick Lynch” – a reference to the RMT rail union’s plain-speaking general secretary.

The starting salary for a Foundation year one doctor, the entry level for junior – or trainee – doctors is £29,384. All doctors are “juniors” until they become a consultant, usually in their mid to late 30s.

Reminded that ministers had dismissed the 30% claim, Banfield said: “That kind of rhetoric from government that says ‘bring it on, we’re up for a battle with the doctors’, that’s just unhelpful. But it’s the same ‘bring it on’ [mindset] that says ‘if you really want to know how bad the health service that you preside over, fund and control [is], then we will tell the public how bad it is and what a desperate state it’s in’.

“The public is already witnessing an NHS that’s disintegrating in places. It cannot be right to be left lying on a floor with a fractured hip for eight hours. My wife [a GP] had a patient in a diabetic coma, which is life-threatening, and couldn’t get an ambulance to get her into hospital. People are lying on a trolley for three days in an emergency department. That’s where our NHS is now.

“GPs are having conversations with elderly patients about not going into hospital when they should be in hospital because they don’t want to die on a trolley in a corridor. People are dying waiting for attention. What kind of NHS is that?”

Banfield added that he expects most of the public to back the doctors if they do take action. “This is about fighting for them and their NHS. Our message to the public would be that there may be some short-term disruption to prove to government that they have to take this [doctors’ pay] seriously.”

Giving doctors the substantial pay rise they deserve would cost less than the “horrendous” £6.2bn the NHS in England spends on temporary staff, he claims. “It’s dearer to pay locums than to pay doctors properly. It’s not only absurd, it beggars belief that this isn’t common sense. If they can find £37bn for a test-and-trace system that didn’t work, this is actually a small amount of money in the grand scheme of things to start rebuilding their NHS.”

Doctors may seek to coordinate any walkouts with other groups of health workers, to maximise their effectiveness, Banfield indicated. “Will we talk to other unions? Of course we will.”

A government spokesperson said: “The government wants a fair pay deal for nurses, doctors and the taxpayer, and is carefully considering the recommendations from the independent pay review bodies.

“We are incredibly grateful to all NHS staff and they received a 3% pay rise last year –increasing nurses’ pay by £1,000 on average despite a public sector pay freeze – and we are giving NHS workers another pay rise this year.”
Add Comment