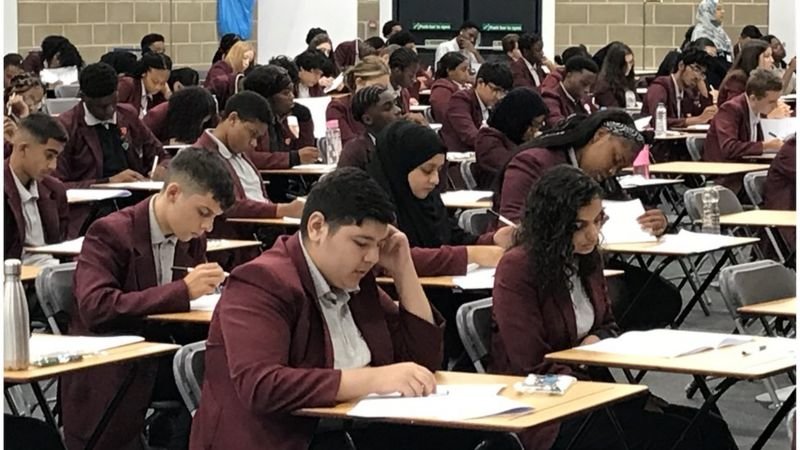 Next year's exams in England delayed but still going ahead

Next summer's A-levels and GCSEs in England are going ahead - but with reduced content for some subjects and a start date pushed back by three weeks.

Most exams will now start from 7 June, rather than mid-May, in an attempt to make up for lost teaching time.

Head teachers accused ministers of an "inadequate response" to the scale of disruption facing pupils and teachers.

The Department for Education says it expects vocational qualifications to also align with this changed timetable.

There were warnings that running a full set of exams would be unfair to schools in the north of England, which have faced particular disruption from Covid outbreaks.

"They are the ones most likely to have been impacted by school closures following year group bubbles of pupils having to be sent home," said Sarah Mulholland of the Northern Powerhouse lobbying group.

Exam boards, represented by the Joint Council for Qualifications, said the "trade off" of a later start would be a more "compressed" exam timetable, with the same number of exams across a shorter number of days. 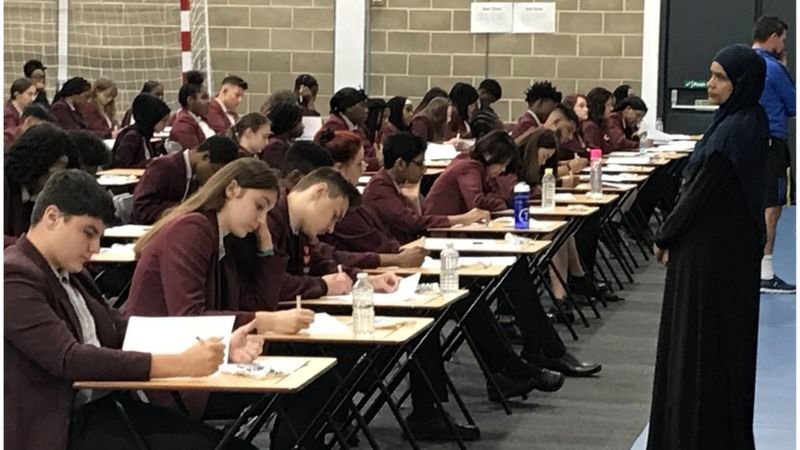 But Mr Williamson said: "Exams are the fairest way of judging a student's performance so they will go ahead, underpinned by contingency measures developed in partnership with the sector.

"Students have experienced considerable disruption and it's right we give them, and their teachers, the certainty that exams will go ahead and more time to prepare."

The promised "contingency measures" will address how exams will be further adapted in the face of local lockdowns and if exams cannot go ahead as planned.

But head teachers were angry at the lack of a decision over what those contingency plans might be - and what information they should be gathering in case exams are cancelled again and grades have to be estimated.

The delayed start date - proposed by ministers in June - was described by heads' union leader Geoff Barton as of "marginal benefit" compared with the amount of lost teaching time from the pandemic.

He said it had "taken an eternity" for the government's response - which he warned still did not address how exams could be a level playing field for pupils who had faced different levels of disruption.

Pupils due to take exams have already have lost months of teaching time - and many are still facing further disruption, with almost one in five secondary schools sending home pupils because of Covid cases.

Mary Bousted, co-leader of the National Education Union, said it was a "dereliction of duty" that there was still no decision on a "fall-back" plan if exams are further disrupted.

She said the announcement was an "appalling example of political ideology trumping practical reality".

But Glenys Stacey, interim head of Ofqual, said the announcement would "optimise the time now available" and provided certainty over what schools needed to teach.

"Of course, we will need contingency plans. We are discussing with government, exam boards and the sector, the detail of that - taking into account the risk of disruption at an individual, local and regional level," she said.

Her predecessor had resigned after the chaos of trying to produce replacement grades, when exams had been cancelled.

What students say about it

"I am taking my A-levels next year and I don't feel confident at all about the delaying of exams and I feel it doesn't address the inequality in education that has occurred due to large numbers of students self-isolating," said Keira from London.

And she says there needs to be a plan that will be fair "in the event of exams not taking place".

Another A-level student, Stephen from Devon, backed the decision to press ahead with exams as fairest option.

"I would be very disappointed not to be given the opportunity to prove my ability to exam boards to achieve the grade I truly deserve, not one generated by an algorithm or even allocated by a teacher," he said.

Hannah from Leicester said it would be unfair not to reduce how much will still need to be studies for A-levels. "The loss of teaching time means we should be able to have less content for our final exam."

The modifications to exams will be those previously put forward by the Ofqual qualifications watchdog - which Mr Barton, leader of the ASCL head teachers' union, had described as "only tinkering at the edges".

These included removing field trips from geography and reducing the areas needed to be covered for English literature.

Teachers' unions had suggested that questions should be structured differently next year - such as providing more options so that pupils would be able to answer a question on a topic they had studied, no matter how much of the course their school had managed to cover.

The universities minister has already said that universities could change their autumn term dates if they needed to accommodate school exams being pushed back.

The announcement for England is a less radical approach than Scotland, where last week exams for National 5 qualifications were cancelled, replacing them with teacher assessments and course work, while still going ahead with Higher exams.

Scotland's education secretary had said it was "too big a risk" to plan a full set of exams when there was so much uncertainty about the impact of the pandemic in the months ahead.

In Northern Ireland, exams are going ahead but with reductions in course content and a delayed starting date - plus the promise of a contingency plan.