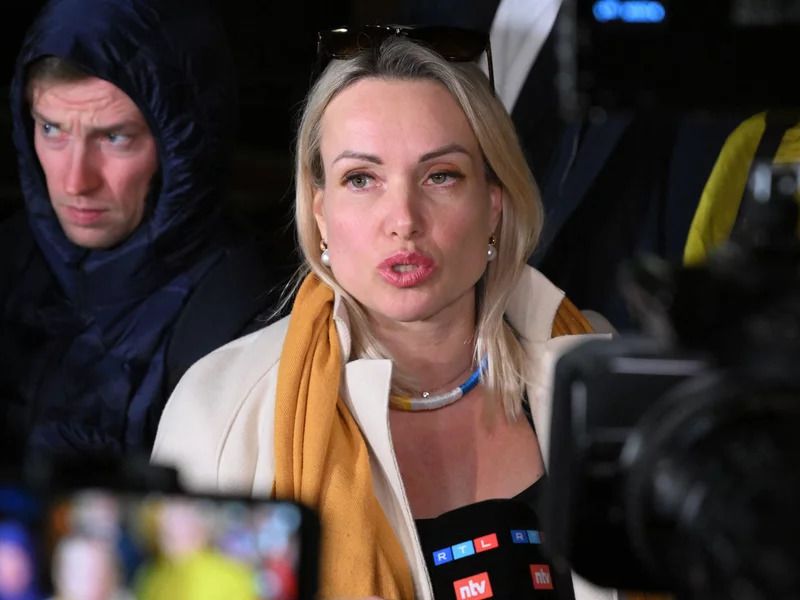 A Russian journalist has been fined and released after she protested against the war in Ukraine on a live TV news programme and made an anti-war video.

Marina Ovsyannikova, an editor at state-controlled Channel 1, was detained after she ran on to the set on Monday holding a sign saying "no war".

She said she had been questioned for 14 hours and not slept for two days, and was not given access to legal help.

She had pleaded not guilty to the charge of organising an unauthorised public event.

In the video, she called on the Russian people to protest against the war, saying only they have the power to "stop all this madness".

"Don't be afraid of anything. They can't imprison us all," she said.

It is not clear if she will face separate charges relating to her protest on live TV, and there had been fears she would be prosecuted under a more serious, new criminal law that bans calling Russia's military action in Ukraine an "invasion" or spreading "fake news" about the conflict.

After the court hearing Ms Ovsyannikova told reporters that she needed to rest after two days without sleep.

"The interrogation lasted for more than 14 hours, I wasn't allowed to get in touch with my family or friends, I was denied access to a lawyer," she said.

She also stressed that she came up with the idea of the protest alone.

"It was my anti-war decision. I made this decision by myself because I don't like Russia starting this invasion. It was really terrible," she said in English as she left the courthouse.

Lawyers were unable to locate Ms Ovsyannikova for several hours after she was detained on Monday evening.

Her whereabouts were unknown until an image circulated on Russian media which showed her in court with lawyer Anton Gashinsky. 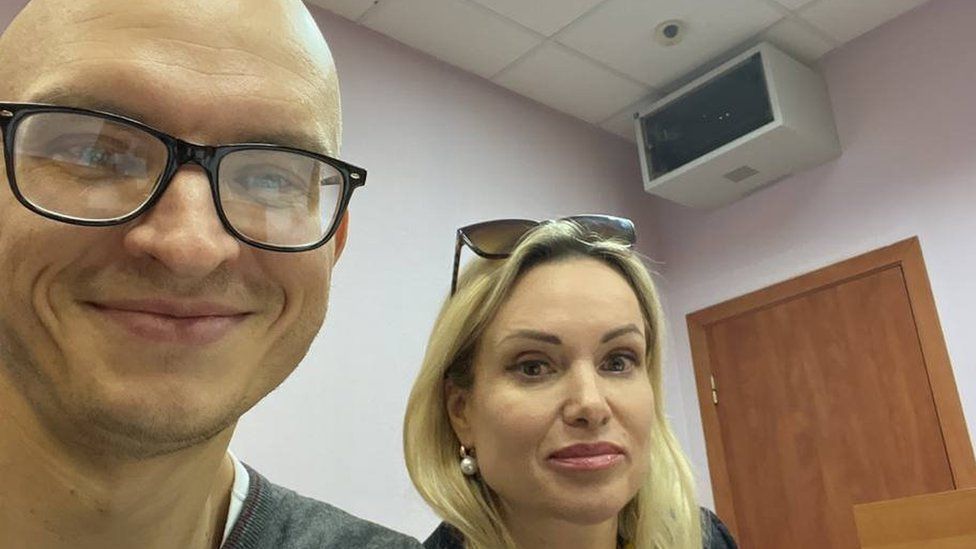 'They are lying to you'

Images of Ms Ovsyannikova's protest were quickly shared across the world after she ran on to the set of one of Russia's most-watched news programmes, Vremya, holding a sign reading "No war, stop the war, don't believe the propaganda, they are lying to you here."

She could also be heard repeating the words "no war, stop the war".

The placard was clearly visible for a few seconds before the programme cut away from the live broadcast to a pre-recorded report.

Before the incident she recorded a video in which she said she was ashamed to work for what she called Kremlin propaganda.

Ms Ovsyannikova, who said her father was Ukrainian, said the whole world had turned against Russia.

"The next 10 generations won't be able to clean themselves from the shame of this fratricidal war."

Her colleagues at Channel 1 were reportedly surprised by her actions.

One told the Faridaily blog - run by former BBC Russian Service journalist Farida Rustamova - that Ms Ovsyannikova, who has two children, had never discussed politics, but spoke "mostly about children, dogs and the house".

From the moment her identity became known, Ms Ovsyannikova received dozens of comments on her Facebook page in Ukrainian, Russian and English, thanking her for her actions.

Ukraine's President Zelensky also praised her for "telling the truth".

French President Emmanuel Macron said France would launch an effort to offer her protection, either at the embassy or through asylum, and said he would discuss it in his next conversation with President Putin.

But Kremlin spokesman Dmitry Peskov called her actions an act of "hooliganism".

Russian television news has long been controlled by the Kremlin and independent viewpoints are rare on all the major channels.

It is also unusual for employees of state-controlled news organisations to express an opinion that differs from the official Kremlin position.

But since the war in Ukraine began, at least three journalists have resigned from top Russian TV channels: Zhanna Agalakova from Channel 1, and Lilia Gildeyeva and Vadim Glusker from NTV.

State-controlled Russian media refer to the war as a "special military operation" and paint Ukraine as the aggressor, describing Ukraine's elected government as neo-Nazis.

Several of the remaining independent media outlets in Russia have stopped broadcasting or publishing after pressure from the authorities, including the radio station Echo of Moscow, and TV Rain - an online TV channel.

Others, like newspaper Novaya Gazeta, are attempting to report on the situation without falling foul of the new censorship laws.

Access to the BBC has also been restricted inside Russia, leading the corporation to issue guidance over how to continue using its services.

Many social media sites have also been blocked, further restricting the number and diversity of news sources available to people inside Russia.