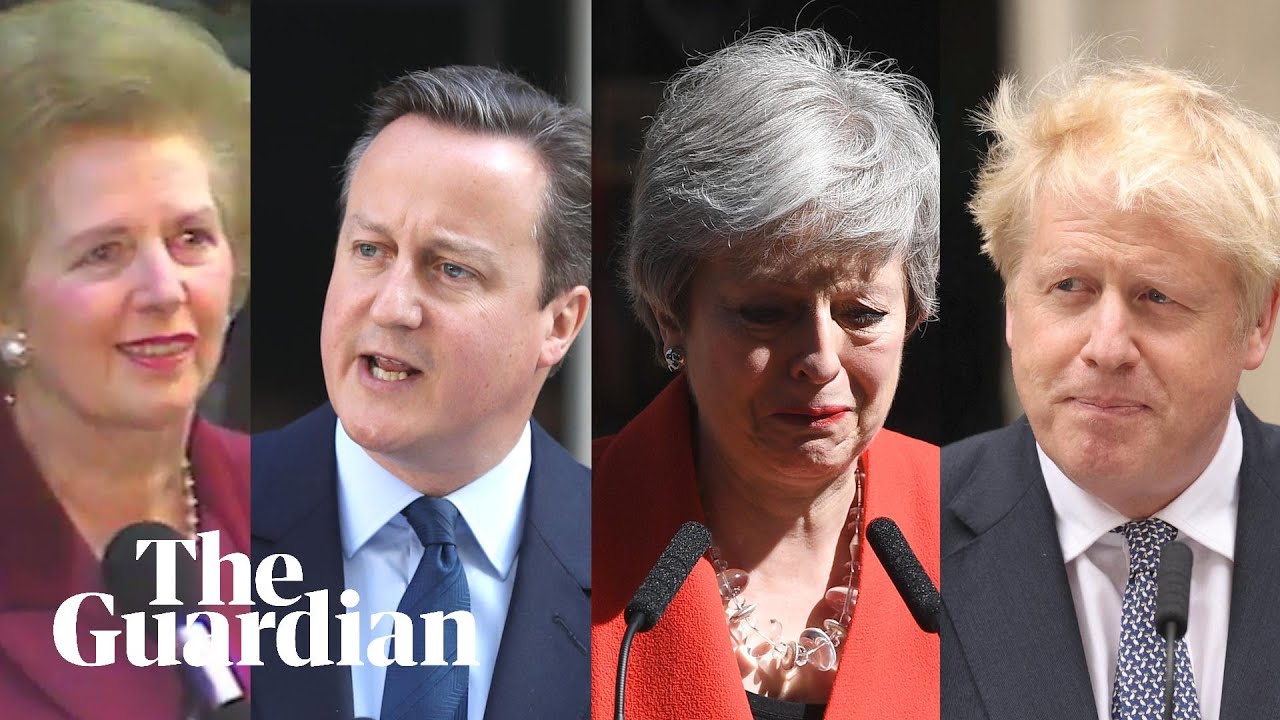 The moment of a prime ministerial resignation has always been one of intense political drama, resulting in words and images that linger long in the memory.

Margaret Thatcher was applauded even by her detractors for a bullish Commons performance after she had announced that she would go, but the enduring image remains a woman in tears looking mournfully back at Downing Street as her car pulled away from the famous black door.

Tony Blair chose a Labour club in the north-east of England to announce his departure and reflect on his own weaknesses, while David Cameron left abruptly after the UK voted to leave the EU.

Theresa May, with her successor, Boris Johnson, snapping at her heels, was tearful as she expressed her gratitude for being able to serve the country she loved.

The UK’s first female prime minister announced her resignation on 22 November 1990 only days after stating she would stay in post, saying: “I fight, I fight to win.”

After coming under weeks of pressure, Thatcher informed the cabinet at 9am that she would step down as soon as the party elected a new leader. She went on to face the Commons at PMQs with a formidable performance, stating at one point “I’m enjoying this.”

Known as the Iron Lady, Thatcher was nonetheless in tears as she left Downing Street after 11 years, on 28 November 1990.

Speaking outside the black door, she said: “We’re leaving Downing Street for the last time after 11 and a half wonderful years and we’re happy to leave the UK in a very much better state than when we came here.”

She waved and got into the car with her husband, Denis. And as it pulled away, a photographer captured a haunting image of her looking out of the car window.

After 10 years as prime minister, Blair announced he was stepping down in the unlikely location of Trimdon Labour Club.

In an emotional 17-minute speech, he said he would go on 27 June, saying the final judgment on his tenure was “for you, the people, to make”. He apologised for “the times I have fallen short”.

“This country is a blessed country. The British are special. The world knows it, we know it, this is the greatest country on Earth.”

Cameron brought an abrupt end to his six-year premiership in 2016, after the British public rejected his entreaties and voted by a narrow margin to leave the EU.

Just a year after he gained a majority in the 2015 general election, Cameron stood outside No 10 with his wife, Samantha, and said: “The will of the British people is an instruction that must be delivered.”

Looking pale, but collected, he said the referendum was not about the future of “any single politician”, but because of the result, he had to go.

“[T]he British people made a different decision to take a different path,” he said. “As such I think the country requires fresh leadership to take it in this direction.”

On 24 May 2019 Johnson’s direct predecessor announced her resignation, after months of chaos and insubordination among her own MPs and repeated attempts to get her plans for Brexit through parliament. May’s deal had been defeated three times when she finally stood down.

Speaking at the lectern outside Downing Street, an emotional May said it had been “the honour of my life” to serve as Britain’s second female prime minister.

Having strode to the lectern, her voice broke as she said she would leave “with no ill will, but with enormous and enduring gratitude to have had the opportunity to serve the country I love”.

The prime minister listed a series of what she said were her government’s achievements, including tackling the deficit, reducing unemployment and boosting funding for mental health.

But she admitted: “It is and will always remain a matter of deep regret to me that I have not been able to deliver Brexit.”

As of Wednesday 6 July, Boris Johnson had been prime minister for precisely four weeks less than Theresa May managed. May, who wore a ballgown to Johnson’s confidence vote, could be tempted to once again dust off the sparkles.