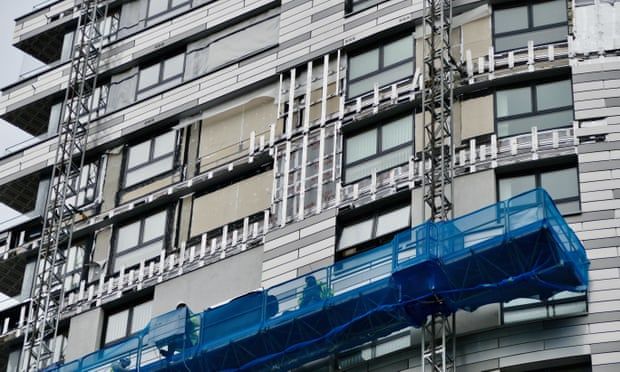 Leaseholders will not have to pay to fix any fire risks, government pledges

Michael Gove says new statutory protection will cover all works required to make buildings safe – not just cladding
New legislation will protect leaseholders from the costs of all post-Grenfell building safety defects, not just combustible cladding, the government has said.

The secretary of state for levelling up, housing and communities, Michael Gove, told parliament the government would give leaseholders statutory protection that extends to all works required to make buildings safe. The move followed anger at reports that officials were only planning to force developers and materials manufacturers to pay to replace combustible cladding on buildings taller than 11 metres.

As about £1.3bn was wiped off the stock market valuations of the UK’s major housebuilders, Gove insisted he had the backing of the chancellor, Rishi Sunak, to threaten developers with tax rises if they don’t pay £4bn to fix the defective buildings that are blighting tens of thousands of households in the wake of the Grenfell Tower disaster.

Lisa Nandy, the shadow housing secretary, questioned whether this would be sufficient. “What makes him think he can force developers, who for four years have refused to do the right thing, to pay up?” she asked in the Commons. “Has the chancellor agreed to back a new tax measure if negotiations fail, or is he prepared to see his own already allocated budget, levelling-up funding or monies for affordable or social housing raided?”

Gove replied: “We do have absolute assurance that we can use the prospect of taxation in order to bring people to the table.”

However, a leaked letter from the Treasury to Gove insisted that new or increased taxes were “not a given at this point”. Nandy suggested that would weaken the government’s hand against developers.

The End Our Cladding Scandal campaign group, which represents affected leaseholders, said: “Rishi Sunak still does not appear to understand the gravity of our situation and is seemingly doing all he can to evade ensuring homeowners are protected.”

Gove also said he was unable to give any guarantees that people who have already paid to fix their homes would receive retrospective compensation.

Nevertheless, Gove’s statement represented a marked shift of tone by the government in tackling the building safety crisis. It announced it would scrap a plan to loan money to leaseholders in medium-rise buildings between 11 and 18 metres in height with fire safety defects. It will also scrap advice that all wall systems need to be checked for fire safety.

“Medium-rise buildings are safe, unless there is clear evidence to the contrary,” Gove said. “Those who knowingly put lives at risk should be held to account for their crimes.”

“We will make industry pay to fix all the remaining problems and help to cover the range of costs facing leaseholders,” he said. “Those who manufactured combustible cladding and insulation, many of whom made vast profits even at the height of the pandemic: they must pay now instead of leaseholders.”

He singled out two firms that made cladding and insulation used on Grenfell. “If you look at the behaviour of people who work for Kingspan and Arconic and the evidence that has been presented to the Grenfell inquiry, [it] is truly dreadful.”

However, developers said they should not be held wholly accountable.

Stewart Baseley, the executive chair of the Home Builders Federation, said: “Any further solutions must be proportionate, and involve those who actually built affected buildings and specified, certificated and provided the defective materials on them.”

Taylor Wimpey, which made a pre-tax profit of £287.5m in the first six months of 2021 but saw its share price slide 3.3% by 3pm on Monday, said the government’s plans to fix the cladding crisis must hit others in the supply chain. “There are many organisations involved in the issue of fire safety, including large business in our supply chain, and indeed government themselves,” a spokesperson said.

Reece Lipman, 32, who owns 25% of his flat in Romford, east London, but is liable for 100% of the building safety costs he faces, said Gove “has got the rhetoric right and is now talking with a much firmer tone”. However, he insisted that what has been seen as “just a cladding crisis” is in fact “a full-blown building safety crisis”. He likened government action so far to bailing “water off the Titanic with pots and pans”.

Officials said they were aware that persuading developers to accept responsibility when so many professionals and manufacturers are typically involved in construction projects was “without a doubt difficult”. They said it was possible that government budgets would need to be used in the first place to get urgent remediation works under way while persuading developers to pay up in parallel.

One threat could be to increase the 4% tax on developers’ profits that is already planned to try to raise £2bn over the next 10 years to help cover remediation costs.

Gove said the timescale for getting buildings fixed would be “rapid” but not “immediate”. He has assigned a team of forensic accountants to trace the ownership and developers of affected buildings. From its analysis of 1,000 blocks with fire risks, it believes 43% are owned by 14 corporate groups and a further 10% are owned by five developers, which between them made £1.2bn in profits last year.

They figure that with the top seven developers making £16bn in the last three years, “there is plenty of cash in the system”.

Some observers said they believed the threats might be persuasive. “Gove may find that the developers will pay up immediately to avoid damage to reputation and to avoid being banned from the government scheme,” said a senior lawyer working on the Grenfell Tower public inquiry.

That could trigger “a cascade of threats of legal action”, with the case against some of the main materials manufacturers potentially strengthened when the Grenfell Tower inquiry produces its final report towards the end of this year.
Add Comment